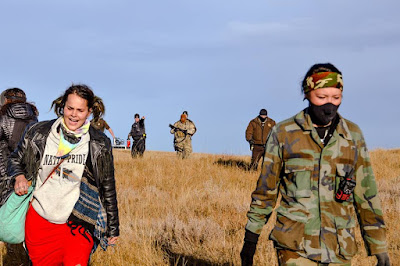 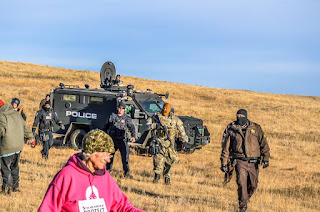 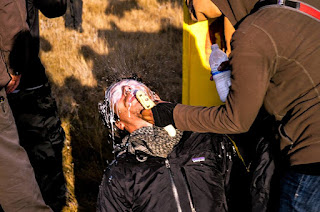 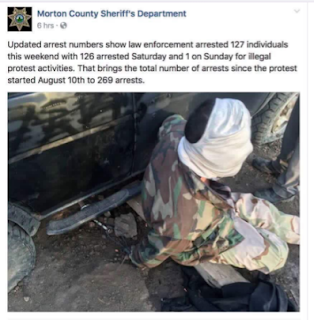 Breaking News at Censored News
MORTON COUNTY WAR CRIME
By Brenda Norrell -- Morton County engaged in torture when it hooded a Standing Rock water protector during a lock down to protect the Missouri River water from Dakota Access Pipeline construction. Morton County Sheriff Kyle Kirchmeier posted this photo.
Morton County engaged in a second act of torture when it forced the daughter of LaDonna Brave Bull Allard to remain naked in a jail cell. She was arrested for no credible reason, strip searched and forced to remain naked all night. Forcing a person to remain naked is a form of torture.
http://bsnorrell.blogspot.com/2016/10/war-crime-morton-county-engaged-in.html
at October 25, 2016

Excellent idea, one which perhaps should have been pursued earlier.
I just hope that there Is a timely response. However, even the potential entry of this new player should give the locals a pause for thought.

North Dakota, another example of the corrupt Industrial, Military, Prison system.
Conviction rates in America can be 88 percent or higher, so innocent citizens go to jail.
America, pre Trial waits in jail can often be longer than what the sentence would have been.
Do deputies joke around about arresting people they don't like because deps can get 'em thrown in jail innocent or not?
Oh! Prosecutors fabricate evidence, lose evidence that would prove a person innocent, encourage police to lie, and sometimes become judges.
What are the judges like ?
Look at mass incarceration in America.
In many American cities its ILLEGAL to give food to homeless people!
(As in setting up tables in a park and distributing food).
Its ILLEGAL to fall asleep in public....
Once in prison, prisoners have to work as slave labor for private-for-profit companies.
American Prisoners are Tortured,
and No JUDGE has the courage to do anything about it.
Racism is rampant. Families don't get face to face visits, its video visits, and if prisoners complain there is punishment.
The excessive prosecutorial charges & human rights violations of the Water Protectors is showing the rot in the criminal justice system in North Dakota.

Thank you for your great post. Share on FB Ban anks that fund Dakota Pipeline like CITIBANK. OTHERS POSTED ON FB. SEARCH BANKS FUNDING DAKOTA PIPEL. HELP ENCOURAGE GREENPEACE TO START MASSIVE ORITESTS IN FRONT OF THOSE BANKS WRITE. BLOG. CALL STATESMEN ESP Senate plus OBAMA. 888 369 5791. DEMAND EXEC ORDER REMOVE MILITARY FROM SR. THREATEN NO POLITICAL SUPPORT EVER AGAIN. NOR APPROOVAL FOR HIS MEMBERSHIP TO UN. SHOUT YOUR INFORMATION AND DEMANDS TO THE ROIFTOPS. THANX FRIEND. SOLIDARITY.THIS IS OK? THEN MARTUAL LAW US IK JOIN WUTH ANONYMOUS. AND OTHER RESISTANCE GROUOS NOW. UNITE AND ACT! NO FEAR. TOGETHER WE OUTNUMBER THE ENEMY. DIVUDED WE FALL LOVE geo ANONYMOUS