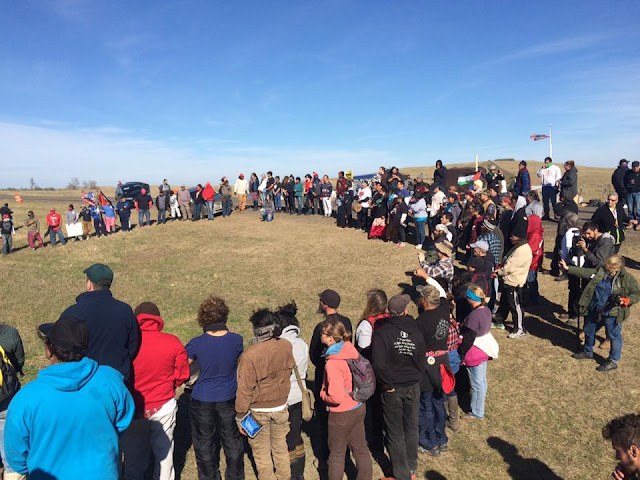 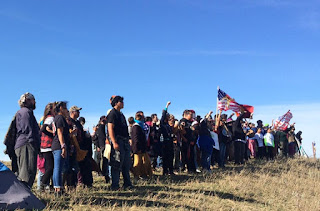 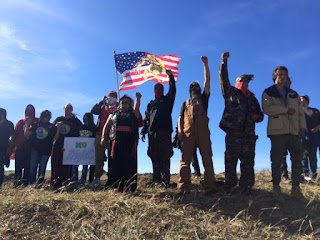 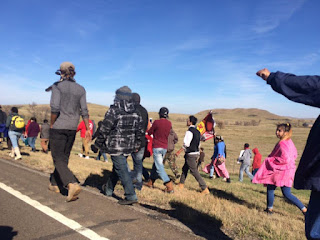 URGENT UPDATE: October 9th 2016 Only three days after the Morton County’s Sherriff’s department staged a press conference that stated they were calling in reinforcements and escalating actions against the Water Protectors, the Comanche Nation led a prayer walk from Oceti Sakowin, Standing Rock Encampment. They left the encampment, and walked on Highway 1806 towards the sacred burial grounds where the dog attack occurred and that has been desecrated by construction of the DAPL pipeline.Shortly after they started the walk, they were confronted by 12 police vehicles including four State Police and eight Sherriff’s. The situation here is so extreme, that our people cannot even walk down a highway without being assaulted. The fact that we cannot even walk in prayer without harassment is a testament to the times we live in and how much value is put on oil and profit before water and people.Women, children, and elders were amongst the Prayer Walkers, they had flags and other ceremonial items with them, they were unarmed and the intention of the police was to intimidate and harass them as they offered songs and medicine to the Sacred Water. This is an act of war against our people and our very way of life.People were very upset and in a high state of emotion to have their ceremony disrupted in such a manner, we are lucky that Camp Security responded so quickly and they came to protect those praying, they arrived to form a line with coordinated action ensured the safety of the people and actively diffused the police who left when they seen the support of the whole camp of 200 people come to defend and protect the people in prayer.We are very lucky no one got hurt and shortly after the police left roughly over 150 people came together to pray in a circle and to ensure they did not come back. The level of the tactics the police state is uncalled for, they are using escalating force as they waste tax payer’s money on deploying helicopters and police every day. This is a battlefield in the fight for clean water we will hold our frontline and protect Mni Wiconi with strong hearts.What the world needs to know is that the atmosphere of fear and aggression is not coming from the Indigenous peoples of the lands, it is coming from DAPL and the police state, it is coming from the Governor protecting his shares in the pipeline.The very presence of the Comanche Nation today peacefully walking in ceremony as Water Protectors has threatened DAPL. We will remain strong, and we will hold the frontline in our fight to Protect the Sacred. We call on all who say we will be there when it gets real. It is real and the time is now, we are calling on all Warriors to come here and lend your body to our battle for clean water. WATER IS LIFEWest Coast Women Warriors Media Cooperative #NODAPL #WATERISLIFE #WATERPROTECTORS #StandingRock Ancestral Pride
at October 09, 2016

Remember always that even though we are many who cannot journey to stand by you in person, we are with you in prayers. Hurts my heart to see how our Prayer Warriors are being treated. Sending positive thoughts and hugs.

My prayers are joined with yours. Great Spirit unites us in this

Keep up the fight water is
our life, my prayers are with you all

Just another example of the government not listening to the ppl.Praying for victory�� yet when supposedly fair and intelligent ppl close their minds to all that isn't profitable to them we have irreversible consequences.Big oil companies are in control of the government because of the ones who have the power to change this are lost to greed and power.only our creator has the power to change or stop them.I pray that our voices are heard, I'm never giving up hope. Once one gives up hope and faith there isn't anything left.Once again my proud Brothers and Sisters are treated as if we are a ppl without feelings, a voice also without rights.Keep up the fight against the completely ignorant ppl who refuse to listen to our very legitimate concerns.