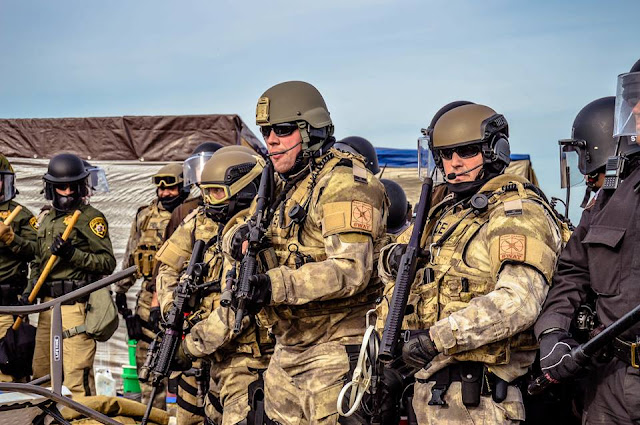 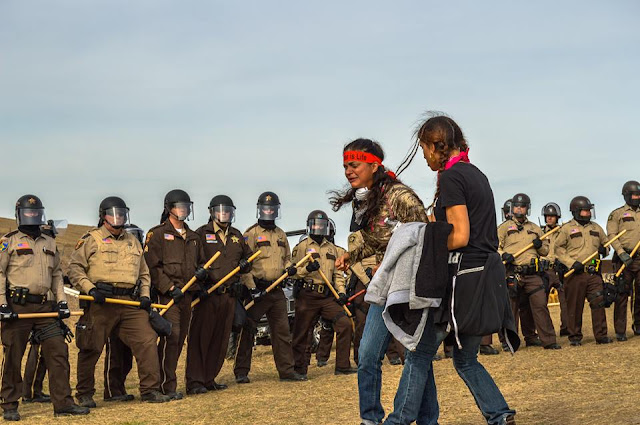 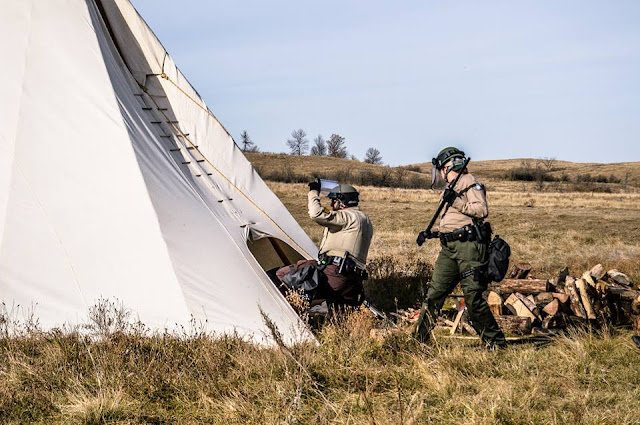 Morton County is one of five law enforcement agencies in the United States concealing public records related to protests, reports Muck Rock. In fact Morton County Sheriff Kyle Kirchmeier is now one of the five worst in the United States when it comes to rejecting Freedom of Information Act requests.Curtis Waltman of Muck Rock said he sent four protest related FOIA requests to Morton County for video footage, arrest reports, documents relating to the massive emergency management compacts, and reports on the eviction of the Oceti Sakowin camp. The requests rejected include the police officers’ body camera footage.“All of these have been rejected, with not a single responsive document being handed over. And much of what I asked for not only absolutely exists, it is basic information which should be public knowledge,” Waltman said.Morton County is refusing to respond to Freedom of Information requests. The other four agencies that are refusing to provide public information are Virginia State Police, Boston Regional Intelligence Center, Chicago Police Department and Austin Police Department. “Reports coming out of Standing Rock were shocking to many Americans and carried revelations about how law enforcement were conducting themselves in regards to protests. It is a miscarriage of justice and FOIA law to keep these records sealed when there is such a huge amount of public concern.”Read more at Muck Rock https://www.muckrock.com/news/archives/2017/apr/20/five-law-enforcement-agencies-dont-want-you-lookin/?utm_content=bufferf1485&utm_medium=social&utm_source=twitter.com&utm_campaign=buffer
at April 25, 2017 No comments: 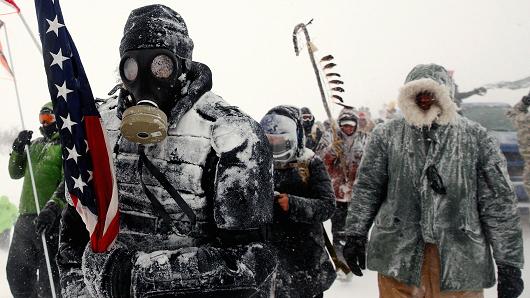 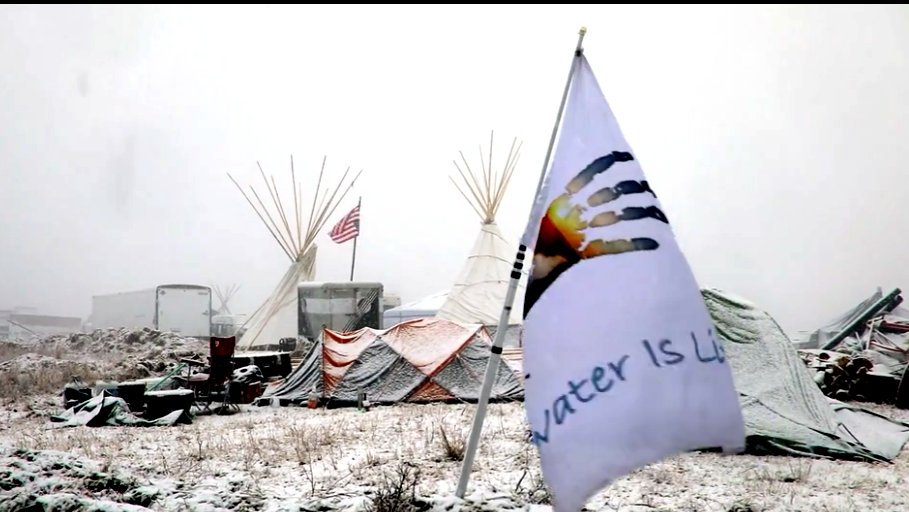 With distorted, stolen and fake news dominating the news, the news from Native Americans continues to be censored and manipulated, as the United States carries out its slow and toxic genocide.
The United States now says it is too dangerous to reveal the truth of potential oil spills in Lake Oahe at Standing Rock. The U.S. Army Corps says it would endanger lives to reveal the truth of the risks of Dakota Access pipeline oil spills in Lake Oahe. Muck Rock filed a Freedom of Information request, which the US Corps of Engineers refuses to comply with. http://bsnorrell.blogspot.com/2017/04/us-says-too-dangerous-to-reveal-risks.html
More than 800 water protectors have been arrested at Standing Rock defending the water from the Dakota Access pipeline. Native American water protectors have been tear-gassed, shot with rubber bullets, blasted with water cannons in freezing temperatures, arrested during ceremonies, and jailed in Morton County in dog kennels overnight without sufficient food, water or medicine. While militarized police flagrantly violated human rights and engaged in blatant excessive force, the water protectors remained unarmed with only prayer as their defense to protect Lake Oahe and the Missouri River from the underwater crude oil pipeline spills of Dakota Access pipeline, now threatening the water source of millions.
Lakota Grandmother Theresa BlackOwl, arrested in a teepee during a ceremony, says this fight is not over, and urges water protectors to stand up and resist. "The government does not want the world to see how they still fear us. Hold your ground. This fight is not over with. We did wake up the world." http://bsnorrell.blogspot.com/2017/04/never-back-down-water-protector.html
The legal defense for Standing Rock water protector Red Fawn Fallis has asked for the judge to be removed based on bias. “The Motion for Recusal is also based on bias demonstrated specifically toward Ms. Fallis by Judge Hovland's decision to violate court rules by reversing within 24 hours an order issued by Magistrate Charles Miller releasing Ms. Fallis to a halfway house prior to her trial. In doing so, Judge Hovland did not give Ms. Fallis the opportunity to respond to the government’s motion to revoke the Magistrate’s order, in violation of Local Rule 47.1 of the North Dakota District Court." -- Water Protector Legal Collective http://bsnorrell.blogspot.com/2017/04/water-protector-red-fawn-seeks-recusal.html
Meanwhile, Native American water protectors are at the United Nations Permanent Forum in New York today, challenging the establishment to rise up and actually rush into the battleground of global Indigenous human rights. Indigenous women from the frontlines of struggle will speak during the UN Permanent Forum in New York on Wednesday, April 26. Indigenous women from Standing Rock water defense will join their global sisters to speak out in defense of the earth, water and peoples.http://bsnorrell.blogspot.com/2017/04/indigenous-women-voices-of-global_24.html
The long anticipated "F-ck Trump" column by Zapatistas Subcomandante Galeano (Marcos) is now available in English.http://bsnorrell.blogspot.com/2017/04/zapatistas-prelude-timepieces.html
Photo Screen capture of Standing Rock water protectors camp in AWAKE film, premiered at Tribeca Film Festival on Saturday night.
Copyright Brenda Norrell
at April 25, 2017 2 comments:

U.S. Army Corps says it would endanger lives to reveal the truth of the risks of Dakota Access pipeline oil spills in Lake Oahe

The Army Corps of Engineers says it would endanger lives if it reveals the truth about potential oil spills of Dakota Access pipeline in Lake Oahe. The U.S. Army Corps refuses to respond to a Freedom of Information Request by Muck Rock news.

The Army Corps counsel said he is withholding the facts, based on the U.S. law "which protects records compiled for law enforcement purposes and that if released could be expected to endanger the life or physical safety of an individual. The referenced document contains information related to sensitive infrastructure that if misused could endanger peoples lives and property."
Muck Rock filed a Freedom of Information Request for more information on the assessment on the potential spills. Muck Rock's request comes after the potential spills were referred to in this document of the Army Corps of Engineers concerning the proposed pipeline crossing at Lake Oahe. https://www.minnpost.com/sites/default/files/attachments/USACE%20memorandum.pdf

The risk of the oil spills to the Missouri River and the potential of contaminating the drinking water for millions, is the reason Native Americans and their allies have risked their lives to halt construction and the flow of crude oil beneath Lake Oahe.

Water protectors at Standing Rock have been beaten by militarized police, tear gassed, shot with rubber bullets, blasted with water cannons in freezing temperatures, arrested in ceremonies and jailed in dog kennels in Morton County with numbers written on their arms as was done by the Nazis. More than 800 water protectors at Standing Rock were arrested in the defense of the water from Dakota Access pipeline. 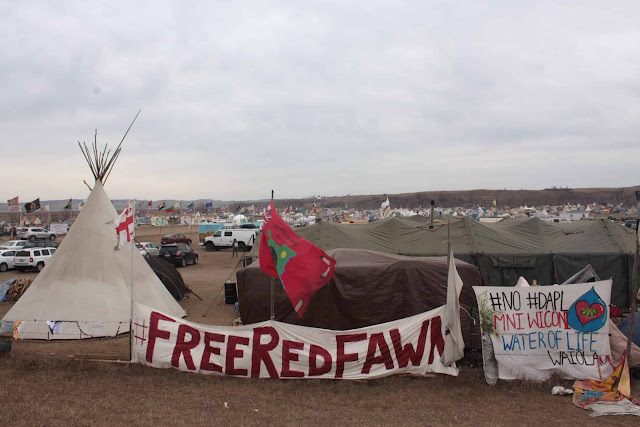 WATER PROTECTOR RED FAWN FALLIS SEEKS RECUSAL OF JUDGE IN FEDERAL CASE
Water Protectors' Rights to Due Process Violated by Judicial Bias
By Water Protector Legal Collective
Censored News
April 24, 2017
BISMARCK, NORTH DAKOTA: Lakota Water Protector Red Fawn Fallis through her attorney Bruce Ellison has filed a Motion for an Order of Recusal requesting that Federal Judge Daniel Hovland disqualify himself from further proceedings in her case due to his apparent bias against Water Protectors.
Ms. Fallis is facing three federal felony charges in relation to allegations stemming from her involvement in the No Dakota Access Pipeline (NoDAPL) movement. Her Motion for Recusal is based on Judge Hovland’s admitted reliance upon out-of-court evidence--such as television and news reports, as well as his own personal observations--in deciding facts related to cases involving NoDAPL Water Protectors. In one instance, Judge Hovland wrote in a court order on September 16, 2016:
With respect to the assertion the movement has been a peaceful protest, one need only turn on a television set or read any newspaper in North Dakota. There the viewer will find countless videos and photographs of ‘peaceful’ protesters…verbally taunting, harassing, and showing disrespect to members of the law enforcement community.
The Motion for Recusal is also based on bias demonstrated specifically toward Ms. Fallis by Judge Hovland's decision to violate court rules by reversing within 24 hours an order issued by Magistrate Charles Miller releasing Ms. Fallis to a halfway house prior to her trial. In doing so, Judge Hovland did not give Ms. Fallis the opportunity to respond to the government’s motion to revoke the Magistrate’s order, in violation of Local Rule 47.1 of the North Dakota District Court.
Ms. Fallis, in an affidavit accompanying the motion for recusal, wrote:
I am aware of the serious criminal charges I face which have lengthy potential criminal sentences. I am therefore very concerned and believe that I deserve to receive a fair trial by a fair jury and have my trial held before an impartial judge….
It…seems to me that Judge Hovland has pre-decided opinions on all aspects of my case and that he will not consider my case individually based upon evidence presented in court in my case. Judge Hovland continually sides with the government in deciding what are the facts, relies on TV, some of his own out of court observations, and things not based on evidence in court to make decisions. Based on the things he has said and written, Judge Hovland has a personal bias or certainly appears to be biased in favor of the government and against me to the point that I believe I cannot receive a fair trial in front of him, and that he does not believe there is any truth to what the different Water Protectors in his court have to say.
WPLC considers the evidence of the judge's bias against Ms. Fallis and other Water Protectors to be yet another piece of the broader effort to undermine the right to a fair trial guaranteed to all Water Protectors, and to unfairly target indigenous individuals involved in the indigenous-led NoDAPL movement.
Bruce Ellison, attorney for Red Fawn Fallis, said, “the documents we filed in Court on Thursday and Judge Hovland’s own statements and rulings show that the lack of due process given to Red Fawn Fallis by this Court is consistent with what seems to be the unquestioned acceptance of all facts alleged by the government, the Dakota Access corporation, and local media. The role of the judge is to be fair and impartial, and to independently decide the case in spite of media and government portrayals of events related to the conduct of Red Fawn and other Water Protectors on the day of her arrest. The statements made on the record and the rulings by Judge Hovland clearly create, at least, the appearance of partiality.”
Water Protectors who have seen and experienced bias and discrimination by public officials based on their indigeneity or political associations are encouraged to contact the Water Protector Legal Collective for advice and representation.
The Water Protector Legal Collective (WPLC) provides on-the-ground legal representation and coordination for Water Protectors engaged in resistance to the Dakota Access Pipeline at Standing Rock, ND in partnership with the National Lawyers Guild (NLG). To support the work of WPLC, please visit https://fundrazr.com/RedOwlLegal
www.WaterProtectorLegal.org
Contact: Bruce Ellison, Attorney for Red Fawn Fallis and WPLC Board Member, belli4law@aol.com,