The Legacy of the Chuska Mountains, Defending the Old Growth Forests

In Memory of Leroy Jackson

Adella Begaye describes how the Chuska Mountains are once again at risk of logging and resource extraction, speaking during Dine' CARE's Western Peoples Convention.
Robyn Jackson, sharing what happened in the early 1990s, when the Chuska Mountains were being logged, said pine trees were not coming back, trees were not going back, herbs were not coming back.
Logging was affecting the water quality.
Robyn shares how her father, the late Leroy Jackson, was very involved, along with her mother, Adella Begaye.
The sawmill, Navajo Forest Products Industries, was in debt.
"Our forest was being taken, the people were being affected."
Dine' CARE wants to protect the land, and defend the land.
"There's a lot of work that we have to do."
"My father is no longer here."
"It is still something that has to be talked about."
Red Valley is on the other side of the mountain, and is now dealing with oil and gas drilling.
The region of the Four Corners on the Navajo Nation has long been considered a sacrifice zone for energy extraction and production to benefit other areas.
"We're tired of being that sacrifice zone."
"We really need to protect our mountains and our forests."
Attorney Bruce Baizel describes how he became involved with legal help. He helped for 10 years with forestry and uranium compensation for Dineh miners.
"It was being clearcut in a way that was not sustainable," Baizel said of the logging of the Chuskas in the 1990s.
"It was a fight about information, and who has control of information."
The trees were not being regenerated.
Now, the fight is with the oil and gas industry.
In forestry, it was the endangered species act, that led the people to win, he said.
Baizel said women are at risk now, and oil and gas extraction is deadly.
"If you can smell it, you are at risk of dying."
Right now this is happening to Navajos in the Counselor, New Mexico area.
This battle is being taken to the international level, he said.
Now the emissions are being monitored with new equipment, data which can be used to protect the people and environment.
"The corporations don't seem to change much."

Previous talk
Fracking on the Navajo Nation
Sam Sage of Counsellor described the destructive oil and gas industry, and what is being done to project the Greater Chaco Region.
Please check back for articles. 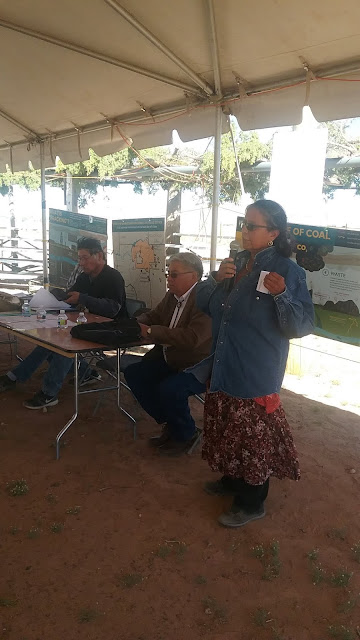 Now! Water Rights and Why We Need to Take Action,
moderated by Adella Begaye.
Listen live. 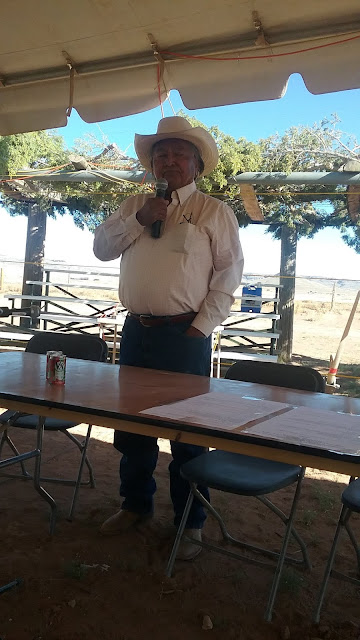 Herb Yazzie, former Chief Justice of the Navajo Nation, said climate change is no hoax, and spoke on the Sovereign Thread that runs through all of Native America. "The invaders came with their weapons, religions, and schools, they planned to change us," Yazzie said at Dine' CARE's Peoples Convention on Saturday. Yazzie said when the Dine' people were released after more than four years of imprisonment, they came back to the homeland, with this song that says, 'I am here, I am standing. I am still here. I exist. I am going back to Mother Earth to live the way I'm supposed to live." Yazzie said the people were coming back in rags on foot, with no possessions at all. "They came up with this song because of their pride, because of who they are, they came up with this song." The song says they will not succumb to what they were subjected to. They will stand up. -- Read more and listen at: https://bsnorrell.blogspot.com/2018/06/the-sovereign-thread-by-herb-yazzie.html