Dine' Citizens Against Ruining Our Environment, Standing Strong for 30 Years, Founders and Board Members Reflect at Dine' CARE Peoples Convention

DILKON, Navajo Nation -- Dine' Citizens Against Ruining Our Environment founders and board members, Standing Strong for 30 Years, share what made a difference as the Dine' CARE Peoples Convention came to a close on Sunday.
Listen as Lori Goodman, Dine' of Dilkon, among the speakers, describes how a proposed toxic waste dump resulted in Dine' rising up and creating Dine' CARE in 1988. Local Dine' defeated the tribe's proposed toxic dump.
From across Indian lands, the people came to celebrate and share their struggles in 1990. Among the delegations were those from the Northwest, imprisoned for defending their fishing rights. Hopi Thomas Banyacya, Chief Johnny Jackson and a delegation of Seminoles from Florida, were among those guiding the discussions.
Then, the late Dr. Larry Emerson of Shiprock, John Redhouse, Anna Frazier of Dilkon, and Earl Tulley of Blue Gap, all Dine', encouraged them to keep going.
Forestry and logging became the focus of struggle in the Chuska Mountains, led by Adella Begaye and her husband Leroy Jackson, found dead after being threatened in 1993. 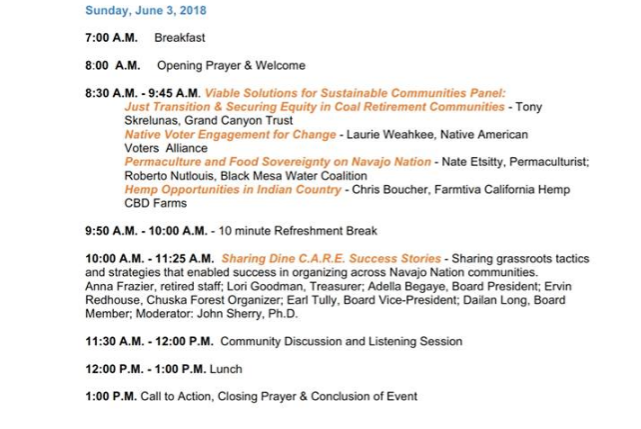