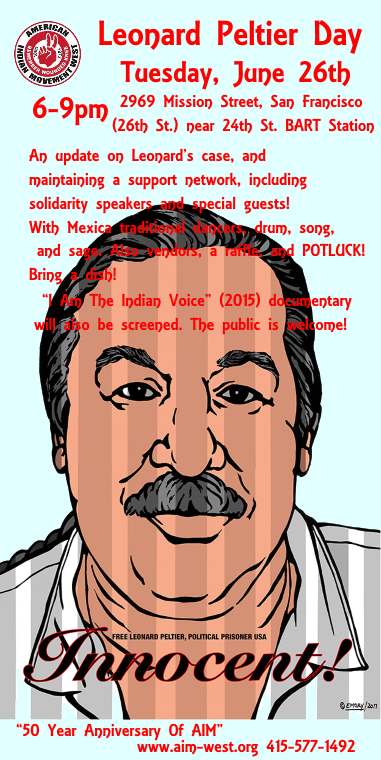 Leonard Peltier Day San Francisco
On the 50th anniversary of AIM!(1968-2018)By AIM West
Censored NewsLeonard is innocent!Yet he languishes in federal prison (now in Coleman Penitentiary near Orlando, Florida) for over 43 years for a crime he did not commit!AIM-WEST is hosting this event Tuesday, June 26th in solidarity with Pine Ridge Tribal Council resolution declaring “Leonard Peltier Day.”The Department of Justice (DoJ) continues to withhold tens of thousands of pages as evidence for Leonard’s defense, and federal prosecutors said in court to Judge Haney they don’t know who did the shooting of the two FBI agents on that fateful day June 26, 1975, nor what role Leonard played in it! That should be enough to exonerate Leonard! ‘The bullet doesn’t match the gun (rifle).’The drawing is by Comrade Emory Douglas, former Black Panther Minister of Culture, in solidarity with AIM.We have posters to raffle! A Potluck, film, solidarity speakers and vendors! Please share and the public is welcome! Let’s not forget this Human Rights Defender!Aho! All my relations!Tony GonzalesAIM-WEST