It would be 06:59 - Mexico time - on June 20, 2021, when, from La Montaña and through a misty horizon, land from the Iberian Peninsula was sighted. It would be 09:14:45 when the ship anchored in the bay of Baiona or Bayona, Galicia, Spanish State, Europe. From there it is close, "a stone's throw", the geography called Portugal, and a little to the Northeast you can see Vigo. All in good health. For reasons of paperwork and so on, La Montaña and Squadron 421 will remain here until, tentatively, on Tuesday 22 at 1700 - the date and time in Vigo-, when the landing will be made. The Civil Guard of the Spanish State boarded the ship, took the data of the crew and passengers, reviewed the passports and carried out the routine check. No news. Weather conditions: cloudy, light but frequent rains, 15 degrees Celsius.

Shortly after, several sailboats with compasses from insubordinate Europe approached, to welcome them ... or to check if the rumors that run through the neighborhoods, fields and mountains of the world were true: "the Zapatistas have invaded Europe."

On the ground, at the foot of what looks like a lighthouse, another group shouted something like “ We surrender! ”… Nah, just kidding. They shout that Zapata Lives, that Welcome, that… it is not well understood. They carry banners and drawings. As far as you can see, there are no obscene signs - which may indicate that we have not been disowned ... yet. Someone out of place carries a sign that reads: “ Comedor La Palomita Insurrecta. Galician broth, Empanadas Ídem and Xoubas. Special discounts for Invaders, beetles and cat-dogs ”. Another poster reads “ Get me out of here! ”. The wiser people use banners as umbrellas.

The European sky cries moved. Their tears are confused with those that moisten the cheeks - tanned to the sun, sea, anguish and adrenaline -, of the intrepid 421 Squad. In their steps, in their glances, in their heartbeats, the Mayan peoples - so the legend will say - crossed the Atlantic in 50 days and nights, in its long and rugged journey through life.

It is cold outside, but inside, in the geography of the heart, something like a feeling warms the soul. In the mountains of the Mexican southeast, the sun smiles and the first notes of a cumbia come out joyfully from the sound system.

Of course, the disembarkation, the transfer of the air delegation, the organization of the agenda, the meetings,… and the party of the word are missing.

That is, everything is missing. 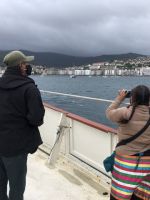 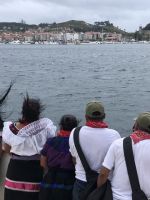