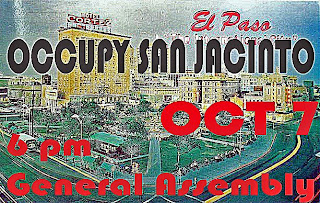 Tucson Meet Yourself: The beauty of cultures 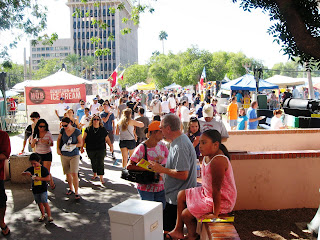 'Tucson Meet Yourself,' a celebration of beauty
Article and photos by Brenda Norrell
Censored News
http://www.bsnorrell.blogspot.com
TUCSON -- This is what Tucson does best, it celebrates itself. With Turkish coffee, Southern catfish, Yaqui fry bread and Colombian empenadas, once a year the people of Tucson come together to celebrate the beauty of their cultures, with food, art, music and dance.
This is no ordinary celebration.
There's O'odham horsehair basketry and Yaqui carvings in the Sonoran Pavilion, with crafts from around the world in the Folk Arts Demonstrations. There's Bhutanese tailoring, Buruni basket weaving, Dine' flute and drums, Indian rakhi bracelets, Japanese calligraphy and Ukrainian wood carving.
On the many stages throughout downtown, the music changes from waltz to tango, then to old time fiddlers and jazz. There's the Latin Funk Project, hip hop, Pacific Islanders hula hoop and bagpipes -- not all at the same time.
Yaqui musician Gabriel Ayala was featured this year, after just being awarded Artist of the Year at the Native American Music Awards 2011. The Native music included W:ak T:ab Basket Dancers of the Tohono O'odham Nation and Trio Sure from the Yaqui homeland in Sonora.
Where else but in Tuscon can you find a world class Low Rider Car Show, with an awards program, located next to a pile of fresh field gourds and nopalito cactus pads, all alongside the favorite Planet of the Crepes food truck, and across from the senior women belly dancers.
Here, too, is what makes Tucson truly unique. It is a global caring community. The Iskashitaa Refugee Harvesting program provides refugees with a way to share their skills, while gaining new ones. The grassroots network includes recent UN refugees from Afghanistan, Bhutan, Burundi, Congo, Eritrea, Iraq, Rwanda, Somalia and Sudan. They harvest excess fruits and vegetables throughout the year to share with refugees and non-profits. There's also a sewing and crafts center.
During this year's Tucson Meet Yourself, Oct. 14-16, along with hundreds of musicians and artists, there was a conference designed to celebrate the beauty of this region's foods, from the flour of the mesquite beans, to the cactus pads, nopalitas, and corn, beans and squash.
The Cultural Nutrition Conference, The Ultimate Food Fight II, Back for Seconds, was held in the cool of the library, as it was hot for Tucson this time of year, at 99 degrees.
During a series of talks, University of Arizona's Mexican American Studies students described how traditional foods, high in fiber and nutrients, keep people healthy, as compared to junk foods. They offered suggestions for preventing diabetes, like using black beans and substituting whole wheat for white flour, while avoiding excessive fatty and salty foods. For diabetics, cinnamon, nopalitos and prickly pear fruits were encouraged for their health giving properties.
The medicinal properties of the copal tree of Michoacan was described, and the colonization and exploitation of foods was discussed. Along with the university students, speakers included ethnobotanist and author Gary Nabhan and members of the Danza Xochilpilli Centeol dance group. The conference, organized by professor Roberto Rodriguez, included a morning run, with the message to keep moving for health.
Photo mural: Chiles; curried goat to eat at the Jamaican food stand; the Costa Rica food stand; Turkish coffee maker; Michoacan speaker on the medicinal properties of the copal tree; refugee sewing circle; Low Rider Car Show and women making Turkish flatbread.
at October 16, 2011 No comments: