Another mellow day at Occupy Tucson 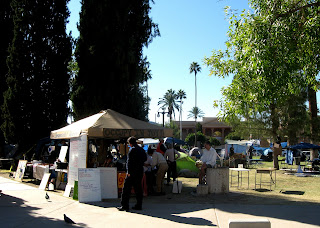 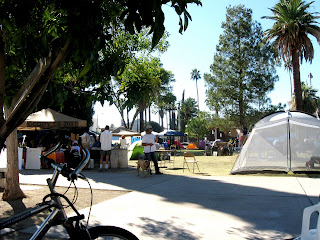 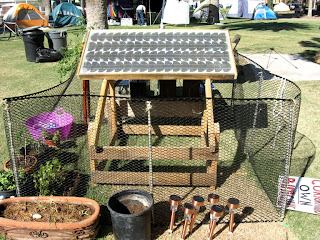 By Brenda Norrell
Censored News
http://www.bsnorrell.blogspot.com
TUCSON -- It was another mellow day at Occupy Tucson, with nutritious sandwiches and fresh coleslaw served at noon. A new solar panel, in the little garden, provides electric power for the kitchen.
Like most days, there was a steady stream of local activists and university folks sauntering through, joining the occupiers for a visit. At one table, there was information on "Save the Peaks," and the threats posed by Rosemont Mine. On the bulletin board, there's info on the local efforts like Derechos Humanos and No More Deaths.
There's a steady stream of young tech wizards, homeless, housewives, retirees, bike riders and downtown folks around to visit. There's an information table, library, tech tent, medic tent and of course, the kitchen, where fresh food or donated pizzas are usually found. Today there was popcorn in the afternoon.
Although Occupy Tucson made national news this week, the news wasn't exactly accurate.
While more than 300 people have been cited at Occupy Tucson, they have not been arrested. Each night Tucson police come around about 10:30 pm and issue citations at the main site, at Armory Park, and at the satellite camp down the street. Still, those cited have to make a court appearance, and each fine could be a maximum of $1,000.
--Sunday, Oct. 30, 2011
at October 30, 2011 1 comment: 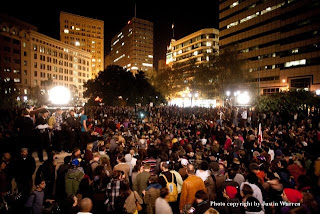 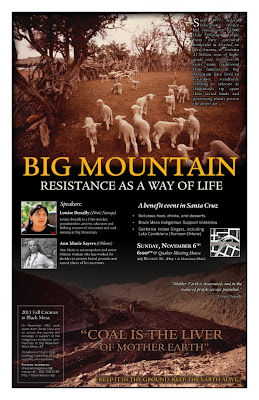 SPEAKERS:
Louise Benally (Diné/Navajo)
A Diné mother, grandmother, activist, educator and lifelong resister of relocation and coal mining at Big Mountain.
Ann Marie Sayers (Ohlone)
An outspoken and active Ohlone woman who has worked for decades to protect burial grounds and sacred places of her ancestors.
- Delicious food, drinks, and desserts
- Black Mesa Indigenous Support slideshow
- California Indian Singers, including Wicahpiluta Candelaria (Rumsen Ohlone)
This is a fundraiser, however, no one will be turned away for lack of funds.
All donations will go to direct on-land support for Black Mesa families resisting relocation.
BACKGROUND
Since 1977, federal relocation policy has forced over 12,000 Diné (Navajo) people from their ancestral homeland in Arizona, an area known to contain 21 billion tons of high-grade coal. For over 30 years, many traditional Diné families at Big Mountain have lived in resistance, steadfastly refusing to relocate as strip-mines rip apart their sacred lands and generating plants poison the desert air.
"Coal is the liver of Mother Earth"
Keep it in the ground. Keep the earth alive.
To view the poster for this event:
http://www.indybay.org/uploads/2011/10/30/nov6poster-web.jpg
For a printable mini-flyer in PDF format:
http://www.indybay.org/uploads/2011/10/30/nov6-halfsheet.pdf
Facebook invitation link:
https://www.facebook.com/event.php?eid=294690597217516
Indybay announcement link:
http://www.indybay.org/newsitems/2009/11/10/18628307.php
* 2011 Fall Caravan to Black Mesa *
On November 19th, work crews from Santa Cruz and all across the country will converge in support of the indigenous resistance communities of Big Mountain/Black Mesa, AZ.
Donations of tools, food, clothing, and other basic supplies are requested.
Donations can be dropped off at the Resource Center for Nonviolence in Santa Cruz, Monday-Thursday between 12 and 4pm, or please call 831-708-8199 to make a different arrangement or request a pick-up.
Thank you!
For more information:
Black Mesa Indigenous Support, Santa Cruz regional organizers:
sheepandsagebrush@riseup.net / 831-708-8199
http://blackmesais.org/
at October 30, 2011 No comments: