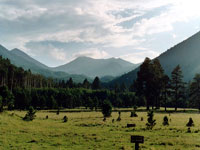 Although a voluntary closure order for the Traditional Cultural Gathering was previously granted by Coconino Forest Supervisor M. Earl Stewart, Stewart apparently changed his position and issued the threat as the four day ceremony was initiated on July 4th, 2012.

When confronted by Forest Service officials, members of the Indigenous Elders and Medicine Peoples Council, the group hosting the Traditional Cultural Gathering, invited Forest Service officials to sit with elders to resolve the Forest Service's concerns with the ceremonial  fire. Coconino Forest Supervisor Stewart stated in a letter dated July 5, 2012, "non-compliance will result in citations for having a fire during restrictions and/or camping in a closure area without a special use permit."

Indigenous Elders and Medicine Peoples Council had worked to inform the of this ceremony since December 2011 and again met with Coconino Tribal Relations on February 27 and June 21 of 2012 to answer questions and to make sure the Forest Service was fully aware of the Council's activities.
On May 17, 2012, the Forest Service was notified that a sacred fire was central to the Traditional Cultural Gathering.

The Indigenous Elders and Medicine Peoples Council is calling for support to address this serious disruption and violation of the Traditional Cultural Gathering. Please call and email the following Forest Service officials and urge them not to assault and desecrate the sacred fire:


July 6, 2012
“The Creator gave the Aboriginal Indigenous Nations of the People Laws to follow and responsibilities to care for all Creation.  These instructions have been passed down from generation to generation from the beginning of Creation.  It is the Law that no one can overpower the Creator’s Law, you are a part of Creation, thus if you break the Law, you are destroying yourself.


We speak on behalf of all Creation: the four legged/those that swim/those that crawl/those that fly/those that burrow in the Earth/the plant and tree Nations.  This one life system includes the elements of fire, water, earth and air, the living environment of “Mother Earth”.

The Sanctity of the Creator’s Law has been broken.  The balance of life has been disrupted.  You come into life as a sacred being.  If you abuse the sacredness of your life then you affect all Creation.  The future of all life is now in jeopardy.

We have now reached the crossroads.  As Aboriginal Indigenous People we ask you to work with us to save the future of all Creation.”


REPRESENTATIVES OF THE COUNCIL