Armed agents from Forest Service and Coconino County Sheriffs enforced desecration of the sacred fire at a ceremony for the San Francisco Peaks on Friday. Law enforcement agents also had a K-9 unit. One person was issued a citation.
Photos by Libby Williams
﻿﻿ 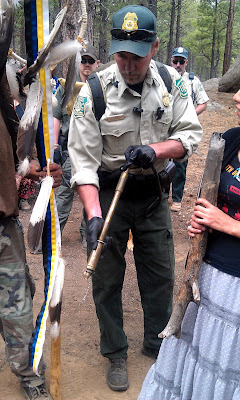 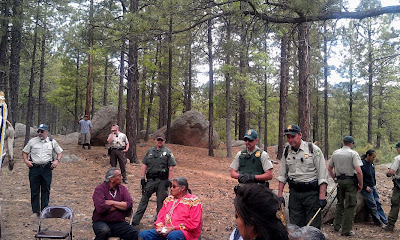 “The Creator gave the Aboriginal Indigenous Nations of the People Laws to follow and responsibilities to care for all Creation. These instructions have been passed down from generation to generation from the beginning of Creation. It is the Law that no one can overpower the Creator’s Law, you are a part of Creation, thus if you break the Law, you are destroying yourself.

We speak on behalf of all Creation: the four legged/those that swim/those that crawl/those that fly/those that burrow in the Earth/the plant and tree Nations. This one life system includes the elements of fire, water, earth and air, the living environment of “Mother Earth”.

The Sanctity of the Creator’s Law has been broken. The balance of life has been disrupted. You come into life as a sacred being. If you abuse the sacredness of your life then you affect all Creation. The future of all life is now in jeopardy.

We have now reached the crossroads. As Aboriginal Indigenous People we ask you to work with us to save the future of all Creation.”

REPRESENTATIVES OF THE COUNCIL