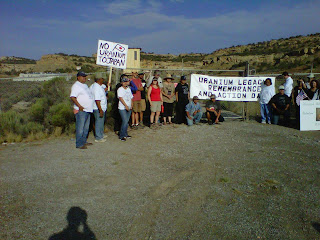 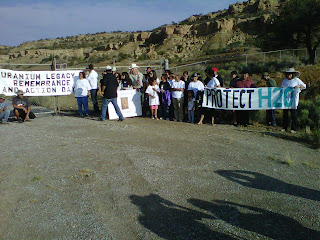 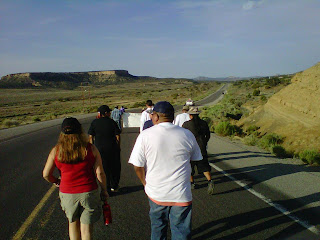 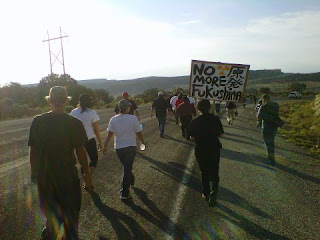 Photos by Andrew Curley, Navajo. Thanks for sharing with Censored News.
Uranium Legacy Rememberance and Action Day: Near Church Rock, N.M., today, Saturday, July 14, 2012, Navajos led this march against new uranium mining at Church Rock, the site of one of the nation's worst uranium tailings spills.

Photos by Andew Curley
Article by Brenda Norrell
Censored News
http://www.bsnorrell.blogspot.com
CHURCH ROCK, N.M. -- Today was the 32nd anniversary of the uranium tailings spill near Church Rock, N.M. Navajos and other walkers walked, and protested, six decades of the impacts from uranium mining on the Navajo Nation.
The Church Rock spill on  July 16, 1979, resulted in millions of gallons of radioactive water pouring into the north fork of the Rio Puerco after an earthen uranium tailings dam failed. Within days, contaminated tailings liquid was found 50 miles downstream in Arizona. The radioactive flow continued for decades down the Rio Puerco.
Today, new uranium mining targets the border of Navajo lands in Church Rock and threatens to poison the drinking water of Navajos. Today, marchers also protested Japan investing into corporations targeting new uranium mining on the Navajo Nation.
The New Mexico Environmental Law Center and Eastern Navajo Diné Against Uranium Mining (ENDAUM) are urging the U. S. Environmental Protection Agency (EPA) to revoke an ill-advised permit they gave to uranium mining company, Hydro Resources, Inc. 23 years ago.
http://bsnorrell.blogspot.com/2012/05/halt-uranium-mine-that-will-poison.html
at July 14, 2012 No comments:


Gwich'in Steering Committee Today we remember and give thanks to the late Jonathon Solomon, Sr., who dedicated his life to protecting our land and culture. This is a moving tribute to him and his life's work. We will never forget the work he did.
at July 14, 2012 No comments: