PBS exposes US Border Patrol agents' sexual abuse and torture of migrants, and pouring out life-saving water in the desert 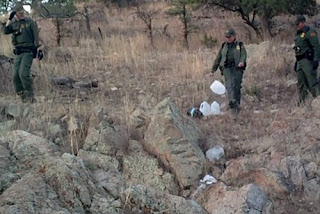 Need to Know, Crossing the Line, Part II, PBS exposes torture by US Border Patrol agents, sexual abuse of migrants, and pouring out life-saving water in the desert. (Watch program above.)
PBS exposes how a Border Patrol agent sexually abused a migrant entering at Las Cruces, N.M., for 15 minutes, calling her "baby." Then, when the woman went to view the lineup of agents to file charges in El Paso, she was taken into a room alone and searched by agents to intimidate her.
In the interviews, even US citizens are harassed by US Border Patrol agents.
A Border Patrol agent whistleblower in Tucson said migrants were crammed into cells, even when other cells were empty. Food and water was denied migrants in custody for up to two days, the whistleblower said.
Migrants in Nogales describe the verbal abuse from agents, and also screaming to be let out of hot, overcrowded cells. One young man describes how he was denied medical treatment after being lost for three days, dehydrated and vomiting blood.
The Red Cross is now in Nogales, Mexico, treating migrants who are sick because of the abuse and who have been beaten by US Border Patrol agents. It was this fact, that the Red Cross has responded, that caused PBS to expand their investigation.
In one video excerpt, US Border Patrol agent David Kermes is shown pouring out life-saving water left for migrants in the desert. On Kermes Facebook page, he posted a photo of migrants, with these words: "Run you little bastards."
A hidden camera placed by the humanitarian group No More Deaths shows a female Border Patrol agent kicking gallons of water over, which could save the lives of migrants, and down into a ravine.
PBS exposes how detained migrants were forced to stand in stress positions for three hours, which is a form of torture. Migrants were forced to kneel on bottle caps in one form of torture.
Border Patrol cameras were covered at the time to prevent exposure of the agents.
The PBS program exposes the same facts that Tohono O'odham human rights activists have been exposing for years. Formal complaints have been filed with Homeland Security following the physical abuse of O'odham on their own land, the Tohono O'odham Nation, by US Border Patrol agents.

About Crossing the Line

Need to Know continues its investigation into alleged abuses by U.S. Border Patrol agents and officers on American soil. Correspondent John Larson investigates stories of physical abuse, sexual assault, and even torture.
This week, Need to Know travels to the border town of Nogales, Mexico to speak with recently deported immigrants living in a migrant shelter. Although Customs and Border Protection provide public reports of complaints of poor treatment, the official numbers pale in comparison to what occurs on the ground. Migrants spoke extensively about massive over-crowding and mistreatment of detainees in U.S. Border Patrol detention facilities. We heard stories of physical abuse from detainees who claim they were deprived of food, water and medical care. We even heard allegations of torture.
To take a closer look at these allegations, our team traveled deep into the mountains of central Mexico to speak with a woman who says she was sexually assaulted by a Border Patrol officer. Correspondent John Larson speaks with a former Border Patrol agent turned whistleblower, who describes deplorable conditions in detention centers.
Border Patrol has strict guidelines on the treatment of migrants staying in detention centers. These guidelines include consequences for agents and officers who break the rules. Our report investigates whether Border Patrol policies— and even international law—are being broken in the rush to secure the U.S. border.
“Crossing the Border” has been produced with assistance from the Nation Institute and the Investigative News Network.