How music cracked open the world: Searching for Sugar Man, How the Beatles Rocked the Kremlin, and the music of Buffy Sainte Marie


Searching for Sugar Man, and How the Beatles Rocked the Kremlin, tell the same story, in very different ways. Both films tell how music, forbidden and censored music, transformed lives, instilled hope, moved generations, and brought social change to two countries, South Africa and the Soviet Union.
While music instilled the yearning for freedom and liberation in South Africa and the Soviet Union, the leader of the so-called free world, President Lyndon Johnson was putting Cree singer Buffy Sainte Marie, the sound of American Indian resistance, out of business.
Searching for Sugar Man

Sixto Diaz Rodriguez didn't know he was more popular than Elvis and the Rolling Stones in South Africa. At a time when South Africa demanded an end to Apartheid, Sugar Man's music offered the hope of life in the open, life unbound, life beyond borders. Rodriguez' music brought the message to fight the establishment.

Searching for Sugar Man tells his story, of his quietness and certitude, and the magic and mystery of his life and poetry of sound.

When the power of his music and voice wasn't recognized in the US, Rodriguez spent his life doing hard labor. Even after the mystery unfolded, he chose the simplest of lives in Detroit. He chose to walk with, work with, and sing to, the people of the streets, the people who do the hard and dirty work that no one else wants to do.

Those in the movements, those who are the working class poor, have all known some Sugar Mans.
Sugar Man's sound is profound and touches the soul, expands the spirit. Sugar Man paid the price for that sound.

These two documentary films, Searching for Sugar Man now in theaters, and How the Beatles Rocked the Kremlin on public television this month, reveal the mystery and magic of music. Regardless of lyrics, the forbidden music of Rodriguez in South Africa, and the underground Beatles music in the Soviet Union, cracked open the souls to revolution, gave birth to freedom of thought, fueled the freedom of movement, and gave birth to the ability to dream.
How the Beatles Rocked the Kremlin

How the Beatles Rocked the Kremlin tells how the Beatles brought about an end to the Cold War, with music more powerful than the threat of US missiles.

The forbidden Beatles music was handmade on flexible records in underground recording basements, using bootleg tapes. The records were made from scrounged x-rays, while Beatle lovers were stalked by gangs who shaved their heads and travelers were searched for the music.

Although the Beatles music was banned, their music was heard on Radio Luxembourg. The music broke through the Iron Curtain.

The movement was so powerful that a Soviet Union propaganda film was produced to counter it. Special militia operations tried to catch people buying or selling Beatles recordings. Still, tape recorders spread the music.

Those who fashioned their lives around the Beatles music were arrested and their hair was cut. But the force to forbid it only served to fuel the movement. The Beatles were a symbol of freedom and the Beatles changed the Soviet Union, more than Gorbachev

The Beatles became a symbol for Russian young people, of freedom, of hope when faced with hostile authorities. Without the facts, they swapped fables, and the Beatles became more mysterious and revered.

It was a quiet revolution, sacred, and it was held in their hearts. Russian bands sprang up, with their big hair and bad shirts, sounding like the Beatles. The choice was often breakfast or a Beatles photo, and ordinary jackets were changed into Beatles jackets with a simple pair of scissors.

It was a small window from the west.

The defection began in the heart and minds. It assured them that there was another life, a life of freedom somewhere. The communist empire began to collapse. The music undermined the system, and it was dangerous.
The repressed yearning eventually changed a generation. It was the Beatles music.
This is the story of How the Beatles Rocked the Kremlin. Paul McCartney eventually was Live in the USSR.
Buffy Sainte Marie blacklisted in the 'Free World' 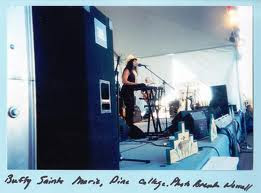 Meanwhile, in what was said to be the free world at the time, Cree singer Buffy Sainte Marie was blacklisted and driven out of the music business.
Buffy said she always refused to be categorized as an Indian princess Pocahontas type. Because of this, she was blacklisted in the US and entire shipments of records would just disappear.
Buffy sang of uranium mining in the Black Hills, the systematic genocide of American Indians in boarding schools, and the steady lies of coal mining corporations and land stealing politicians.

Later she discovered the censorship and pressure applied to radio stations by President Lyndon Johnson during the Vietnam era, particularly toward her "Universal Soldier" during the anti-war movement.


"I found out ten years later, in the 1980s, that Lyndon Johnson had been writing letters on White House stationary praising radio stations for suppressing my music."
In concert at Dine' College on the Navajo Nation, Buffy dedicated "Bury My Heart At Wounded Knee," to Leonard Peltier.

The lyrics tell the story of Native people that fell to the hands of the "robber barons" driven by greed for oil, gold and precious metals. While manipulating the media and politicians, they added uranium to their agenda in the Twentieth Century.

In the song, Buffy sings of a senator in Indian country, a "darling of the energy companies," and covert spies, liars, federal marshals and FBI.

Buffy sings her safety rule: "Don't stand between the reservation and the corporate bank. They send in federal tanks …"


Buffy's music survived. From Alcatraz to Wounded Knee, it was, and is, the sound of American Indian resistance.

Notes
Dec. 17, 2012: Searching for Sugar Man is now playing at Crossroads Theater, on Grant, in Tucson, low prices.
The interview with Buffy Sainte Marie is by Brenda Norrell, and was censored for seven years while she was a staff writer at Indian Country Today. When published, the part about uranium mining was still censored. After being censored and then terminated in 2006, Norrell created Censored News. Buffy's interview article http://bsnorrell.tripod.com/id99.html