Corporate Profiteering, Armchair Journalists and the Fight for Dignity 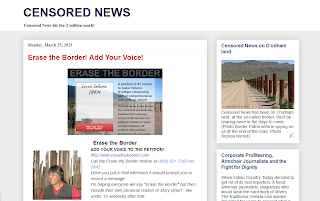 Corporate Profiteering, Armchair Journalists and the Fight for Dignity

When Indian Country Today decided to get rid of its real reporters, it hired armchair journalists, plagiarizes who would steal the hard work of others.
The traditional Oneida clan women struggled for years to prevent what is happening today with the Oneida Nation in New York, which owns the newspaper. The Oneida women struggled to maintain the traditional ways and leaders, and struggled against it becoming a casino corporation. The women, including the Shenandoah family, were persecuted by the tribal politicians.
Censored News was created after longtime ICT staff reporter Brenda Norrell was censored, then forced into bankruptcy because the newspaper would not reimburse the expenses required to do the work, and then finally terminated without cause.
Even then, when Brenda Norrell was working unpaid at Censored News, ICT engaged in the theft of Norrell's work, violated a photo copyright, and plagiarized other work.
Today, Censored News is in its 7th year, with more than 2 million views, and publishes a collective of Indigenous writers, and other grassroots and human rights activists.
Thanks to all of you for maintaining the war against deception, and the fight for truth and dignity!
Please read today's letters from Rebecca Sommer to ICT in response to the plagiarism and copyright violations of her work:
http://bsnorrell.blogspot.com/2013/03/indian-country-today-continues.html
Posted by Censored News, publisher Brenda Norrell at March 25, 2013