Drummers, Singers and Dancers to Gather at Phoenix Convention Center

PHOENIX -- Native American tribal and religious leaders will be holding a Sacred Lands Solidarity Rally and Press Conference at the North Side of the Phoenix Convention Center on Tuesday March 26, 2013, from 11:30 am-1:30 pm. The purpose of the event will be to raise awareness for the protection of Native American sacred lands that are being threatened or destroyed by development. 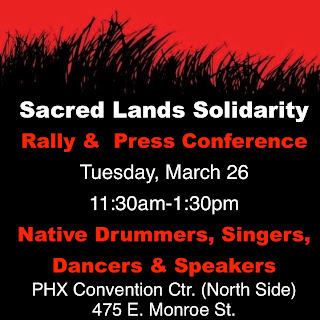 The rally will feature drummers, singers, and dancers as well as speakers who will talk about sacred lands and respond to media questions. The event is open to all Tribal Nations and members of the general public who would like to learn about these issues.
"Native people throughout the country are going through the same struggle," says Hickory Ground Tribal Town member Wayland Gray, who traveled from Oklahoma to participate in the rally. "Indian Country is here in Phoenix and we plan to stand together to honor the sacred lands of our ancestors," Gray added.
The event will coincide with the National Indian Gaming Association (NIGA) conference taking place at the Phoenix Convention Center.
Issues discussed will include San Francisco Peaks, No Loop 202, and Save Hickory Ground, among others.
The address for the North Side of the Convention Center is 475 E. Monroe St. Phoenix, AZ 85004. Everyone is welcome.