Moccasins on the Ground to Protect Sacred Water 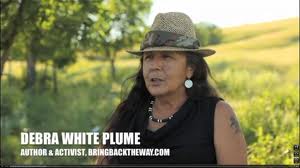 Lakota know we love Unci Maka. All of Unci Maka. Our ancestors were free, to follow the Star Nation Path (the Good Red Road), to roam, to hunt, to be happy, to have sacred water. Then one day, FAT TAKER came thru camp, and stole the fat that many women prepared to get their lodges through the harsh prairie winters. From then on, it was the beginning of a war our ancestors waged in defense of their children, their babies, their, and our, sacred path of life. The gunfire may have ended at Wounded Knee in 1890 on that day when the 7th Calvary massacred unarmed women, children, old people, and men. But the war continues.

America continues to violate international law, which is what a treaty is. Our ancestors made the 1851 and 1868 Ft Laramie Treaty with the United States to retain territory and make peace. America violated the Treaty Law when Fat Taker found gold, and they have been violating it ever since. America recently admitted their guilt in being a Fat Taker, through the unilateral (because no one bothered to talk with Traditional government about this lawsuit) approval of the Cobell Settlement, which awarded a few billion to the many many Red Nations peoples who America stole money from in the amount of $134 billion dollars worth of what American calls "natural resources". These were taken off Unci Maka to make a profit for a few Fat Takers, leaving destruction and contamination behind that our Red Nations have to live and die with.

Our Treaty boundaries encompass a large part of the Great Plains. This is our ancestral territory that we retained through Treaty. We, to this day, love this land, and feel that we need to take care of it. At one point in time, America called, after illegal takings of other unceeded territory, the remaining portions this land base "the Great Sioux Reservation". Nonetheless, we are our own sovereign Nation!

Therein lies some of the confusion as to the understanding of the American people when we speak of "reservations". The place where I live now is the Pine Ridge Indian Reservation in southwestern South Dakota. Officially, in the records of the American government's Interior Department (where the national parks, animals, and plants are managed, is also where the Indians and our lands are "managed") Pine Ridge Reservation is acknowledged as Prisoner of War Camp 344. In the past days, our people were not under the Interior Department, we were classified under the War Department. American Indians (sic) are the only people in this big land who have ANOTHER number, beyond the social security number of all Americans. We have our "Indian" number, our Prisoner of War number. Mine begins with 344. So America knows I dwell within Prisoner of War Camp 344. Think about that for awhile.

In our work to protect Treaty Territory, Human Rights, Treaty Rights, we make allies all over the world to educate about our situation in POW Camp #344, our Treaties, and our obligation and privilege to protect lands and waters for our coming generations. We have many American people allies. Sometimes they make the human error of going by information they find about us, and utilize American records, and America refers to some of our land base as the "Great Sioux Reservation" which was a collective land base for our Nations to live on together, vs the individual 'reservation' landbases that remain after American carved out all our Treaty Territory that they wanted for the Fat. These individual 'reservations' are where the distinct Bands (I am of the Oglala Band) reside today.

The American process of citizen involvement is designed to make people feel they have a voice. However, as the process applies to "American Indians", the process is flawed to benefit the United States and any corporations who want to do business on our lands. America claims their process gives us voice to express our concerns and needs and RIGHTS. We know this is to be fallacy, a myth, a disguise for Fat Taker to continue to get their way.

TransCanada has a website that displays our Moccasins on the Ground Activist Training poster. TC claims they have utilized this American process to "work with" the tribes, but it is just more of the manipulation of Fat Taker to get what they want. Say our "tribe" meets with the American entities of EPA, BLM, etc. and we voice "NO, don't come through here." The entities will say, but we have the right to come through there, it does not violate any law. That is not a consultation, it is the federal government TELLING us what they will do. Our Red Nations have all opposed the kxl pipeline and called upon Lakota to defend the water.

TransCanada is trying to make a big deal out of a mistaken American identification of who our people are and what are Territories consist of. TransCanada is trying to explain away how their tarsands KXL pipeline application process for a permit to enter the big land is all above board and honest and good. Ask the non-Indian American ranchers and farmers from Montana to Texas how above board TC and America have behaved. They lost their lands to eminent domain to TC. They are the new Indians of today, the federal government is helping Fat Taker to take their lands now, against their wishes.

Folks have to take caution, and read between the lines of what these Fat Taker corporations say, as they manipulate the English language and play with words to make themselves look like they are not Fat Taker, that they are honest and good. Do not be deceived by Fat Taker. Stand with us to stop the Keystone XL pipeline and shut down tarsands oil mine. Stand with us now while there is still time to stop them. Take courage! We do have the right to protect our sacred water for our children and grandchildren. It is their water. We must be prepared to protect that which is for our generations.

We are now hosting a three day training session to learn from each other how to protect our sacred water using non violent direct action, which, by the way, is a right of all citizens in this big land. We will make allies, learn new skills, share existing effective skills that will make us stronger in our collective action of putting our Moccasins on the Ground to protect our sacred water. Hecetuwe. (It is so so.)

I stand behind then 100% for not letting this "black death" oil on their lands! 40 spills and it is not even completed! Say no to the pipeline! Tar Sands Oil is the dirtiest oil on earth!