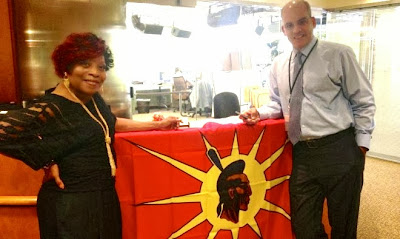 Do we forget that for more than 100 years our children were seized from our homes, stripped of their identities, languages, cultures and dignities while being abused and crippled physically and mentally? Do we fail to acknowledge that policies exist to this day designed to conform us and assimilate our people to their laws and customs?

Can we not see that in 2013 we have become so marginalized in our own lands that the occupiers can actually get away with using our images for sports mascots as though we are not real people or no longer exist?

What’s worse, I think, is that so many are fine with all of this.

The mere mention of a country or nation that the U.S. or Canada deems “unfriendly” sends far too many Native people scurrying to their oppressors’ teats.

Even just the name of countries like Venezuela, Iran, Palestine – countries whose people have never harmed our own – invokes an almost involuntary response due entirely to the propaganda we have been fed.

No matter how many times ABC, CBS, NBC, FOX or CNN portray us as pitiful creatures incapable taking care of ourselves in the land of milk and honey, we still flock to them or to their affiliates for our basic windows to the world and what can only be described as funhouse mirrors to view ourselves.

When I mention a viable alternative to such blather, such as Al Jazeera or Al Jazeera America, it is actually comical to view the responses. Big eyes and “Whoa there, terrorist” are not just written on their faces but are actually uttered through the mouths of some people. Mention that I have done an interview for Al Jazeera and a step back has even been witnessed.

I am not suggesting that anyone gets our story entirely right. However, until there is an Aboriginal Peoples Television Network (APTN) in the U.S. market and perhaps, more importantly, in the international market, we need to examine more critically the ridiculous talking heads that currently dominate the mainstream media. For me, Al Jazeera is the only hope on the horizon.

With the launch of Al Jazeera America, this news channel has committed itself to giving a voice to the voiceless and therein lies our best opportunity to be heard.

But we have to be willing to at least utter a few sounds first and stop running from those the in the US and Canada would love to see us silenced. As we make noise in our own territories we need to help this new network stay true to its word by telling our stories and providing feedback.

My conversations with the folks from Al Jazeera have stressed our plight in the context of many conflicts around the world and throughout history.

There is little point in waging war against the “Washington Redskins” if we are only suggesting that a name change “will make America better.” That is ridiculous! It won’t! Mascots are not the real issue here – racism and genocide are. If no other network – sports, news or talk — is willing to have a serious discussion on how the true heirs to this continent still battle everyday to survive, not just as individuals but as peoples, then I am all in for giving my new best friend “AJ” a shot.

Let’s get a conversation going on the U.N. Declaration on the Rights of Indigenous Peoples (UNDRIP).

Let’s expose the Doctrine of Christian Discovery as the racist foundation the U.S. and Canada is built upon.

Show the poverty, the suicides, the violence and corruption that exist on Native lands – but this time show why. Show the federal policies, state sponsored racism and crimes against humanity that continue to this day in the land of “truth, justice and the American way.”

I don’t mind for a minute telling our story from a studio devoid of fake patriotism, flag lapel pins and pro-America spin on every turn. Let’s give Al Jazeera America a chance. What the Heck! They even have “America” in their name – for all of you who need that sort of thing.