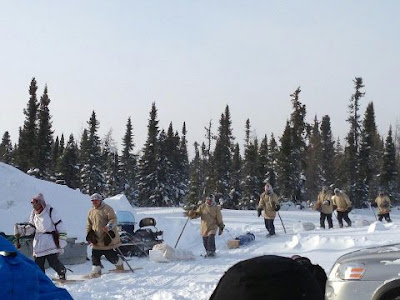 After17 days of walking, the Journey of Nishiyuu, youth trekkers, arrive in Chisasibi, enroute to Ottawa, in solidarity with Idle No More. Photo Kim Moses.
at February 01, 2013 No comments:

Host of Native Pride
http://letstalknativepride.blogspot.com
New York State Governor Andrew Cuomo recently gave his State of the State Budget address. In it he proposed a couple of brand new ideas to stimulate the economy and raise revenue for the State of New York.
The first of his innovative ideas is to create retail establishments in areas that are in dire need of help to bolster their economies. The shops would be allowed to sell merchandise without the oppressive State taxes normally associated with certain products. These shops would only be in certain designated locations and would allow consumers to avoid these oppressive taxes that would still exist everywhere else. The consumers who avoid State tax by patronizing these shops would incur no liability for tax evasion. In fact their purchases are intended to stimulate the local economy, help the NY producers of these products and help keep dollars circulating within those communities and the State for a longer duration. This is being touted as a tourism  program with the hope of attracting out of state consumers to make the trip to these shops and purchase these tax free products thereby giving travelers from other tax jurisdictions the opportunity to avoid their own regions oppressive taxes to New York State's benefit.
Now you might be asking what products is Mr. Cuomo speaking of here. It can't be the state's agricultural products; there is no tax on produce. The answer is simple and obvious: Wine! The key is finding a product that is heavily regulated, over taxed, some what addictive and can be identified with a specific region. Then you strip away the regulations and the tax but only in "special" locations and Bingo! you have a new twist on an old industry. The wine producers of New York will now have streamlined flow to retail. A new breed of retail establishments can emerge to provide jobs, good investments, tourism and most importantly create a flow of revenue that does not leave an area as fast as it comes.
I don't know. Sounds kind of fishy to me; almost "black market". Tax free booze, cheap and more financially accessible? I thought alcohol was a vice. Should New York State be encouraging the growth in the consumption of alcohol? Could this encourage an illicit wine trade? What about all those fine tax paying retailers who won't be able to compete with the new State duty-free wine shops. What about all the lost revenue? Can New York State afford to lose tax revenue? This sounds awfully familiar.....
Oh yeah! Those goddamn Indians. Does this mean that the Governor finally realizes that this very same idea that has been developing for over 30 years in the Native tobacco trade is not a bad thing? Does this mean Mr. Cuomo has looked at real data and realized that the State has actually benefited from Native tax-free sales? Could it be that the manufacturing on Native lands, the wholesaling, distribution and retail now makes sense to those in Albany? Does this mean the New York State Department of Taxation and Finance can finally stop seizing Native brands transported by Native wholesalers from one Native territory to another Native territory? That Native to Native commerce can finally exist without the threat of having loads hijacked by the State? Does this mean the NYS Attorney General will drop his suits against Native manufacturers and withdraw the cease and desist letters to others attempting to block the products entry to the State even though it is just passing through en route to Native lands? Will the federal Bureau of Alcohol, Tobacco and Firearms finally stop characterizing Native tobacco products as contraband simply because they bear no tax stamp from the State and finally cease their raids?
Don't kid yourself! In spite of the hypocrisy, the evidence and the obvious economic benefits to the State, Cuomo is still hellbent on killing Native smoke shops. Is it an Italian thing or does "Duty-Free Wine Shop" just sound better?
What was that second great idea the Governor had again? Oh Yeah! Casinos! How does he keep coming up with this stuff? It's great to be Chief!
John Kane


HISTORY REPEATS
MNN.  Feb. 1, 2013.  In the 1770’s Joseph Brant was one of the most prominent traitors of the Mohawks. In 1804 he was kicked out of the Iroquois Confederacy by the people. He committed treason and treachery to help the British try to wipe out the Mohawk Nation. He helped take down the Tree of Peace and put in its place the US constitution of war.  Joseph Brant died alone in 1807 in his mansion in Burlington Ontario. Two years earlier he murdered his own son. That’s the end he deserved. According to Wampum 58 of the law of the land, when the pine tree is chopped down, his voice is never to be heard by the people ever again.

It would be a really good idea to listen to your Women now!

Canadian Senator Brazeau is Harper’s poster boy to add an Indian face to the appointed Senate. He said that though Idle No More has put aboriginal issues in the news, he does not support their methods. “They don’t stand for anything,” he said. “I, as an Algonquin person, am living proof that no one will colonize me.”  [LOL].
Brazeau, like all other Senators, reports to the shareholders [bankers]. He makes sure the band and tribal council chiefs are good Indians, who push the global agenda. The omnibus bills were written by the Senators. He lobbies for these bills to be passed. These bills are meant to relinquish our existence and our title to our land and resources. He helps the economic royalists, who are accelerating the extraction of our resources for their global war economy.
Brazeau is not an Algonquin. Both his feet are out of the canoe. He took an oath to the Queen of England and forfeited his native identity. In fact, he colonized himself. His women should remind him of this fact. He adopted new customs, language and ideologies.  He is indistinguishable from the white culture he represents.
The wannabe Holly “wood Indian” is supposed to lull our young people into wanting to become a traitor like him. He is helping the economic royalist bankers steal our land and the ever-growing $4 trillion Indian Trust Fund stashed in Indian Affairs in Ottawa. Mark Carney, former Governor of the Bank of Canada, is trying to siphon the loot over to the banker royalist syndicate in England. INTERPOL is now investigating him.
Brazeau, as Hank Williams advised:  “Your cheatin’ heart will pine some day, and crave the love your threw away.  The time will come when you’ll be blue.  Your cheatin’ heart will tell on you.”
http://www.youtube.com/watch?v=cS4LCoh0VGQ
at February 01, 2013 No comments: