GMO INDIAN SCAM
MNN. Feb. 10, 2013. Senator Brazeau turns out to be a ‘No’gonquin Indian created by Indian Affairs. One day he became a member of Kitigan-zibi, an Algonquin community north of Ottawa. Brazeau may meet the blood quantum of the corporate Indian Act. Drunkenness, assaulting women and jailing is the stereotype that he is helping to promote. He married a Kitigan-zibi member, had three children and then departed.


In many other communities, someone or a family turns up claiming to be long lost members of an Indigenous community. Soon after they set up businesses, become politically active and push their own agenda. They make provocative statements to the media and actions that do not reflect the communities they claim to be part of.
The traditional women cannot call in these derelicts to talk to them. They are outsiders. A foreign corporation [Canada] created their membership.
When the bankers want to take over a territory for resource extraction underneath an Indigenous community, strange things happen. The corporations want to take control of the land, minerals and set up nuclear waste dumps.
“Indians” are created to sign away some land and rights on behalf of the true Indigenous. They are “GMO Indians”, the “kill” genes being created by the governments and corporations.
Some real and would-be “Algonquins” are signed up to pose as “owners” of the targeted Indigenous territory. They give the appearance of a legitimate claim to our land so the corporation can raise money on the stock exchange to defraud the public.
The Congress of Aboriginal People CAP is a major player in this scam.  It does not represent Onkwehonwe. It is a nationally incorporated colonial company that got $10 million from Canada to represent “off-reserve” Indians, Inuit, Metis and GMOs, who is anyone that becomes a fake native to help out the corporations. The CAP website is sponsored by the Canadian government, showing a Canadian flag. Each affiliate is provincially or territorially incorporated. It was formerly known as the “Native Council of Canada”.
Brazeau was the National Chief of this “rags to riches” company, paid over $100,000 a year, plus.  Other lavishly paid CAP people are Jerry Peltier, Brendan Sheppard, Kim Beaudin, Carl Dube and Brad Maggrah.
CAP laid claim to all undeveloped Crown land in Canada.  CAP wants to cost share with the Corporation of Canada any ventures on our land. All these unsubstantiated claims to Great Turtle Island violate international law.
CAP has no individual members, only “talking heads”.  Joan “The-Creator-of-GMO-Indians” Holmes registered CAP members. Mostly non-Indians. This list is hidden.


Mother Joan Holmes tries to wipe out or outnumber the real Indigenous. Eventually these GMO Indians are going to try to make decisions for all of us. CAP will get rid of us, our title and our roots to our land. Corporate Canada deludes itself into thinking they can extinguished our fire by throwing GMO wet paper on us. CAP gets its funding from Canadian Heritage, HRDC, Indian Affairs, Environment Canada, Health Canada, Office of Canada and Nuclear Waste Management [which stores nuclear waste].
The noose is tightening.  They want to close the big deal. Some of their ducks have flown away or are behind bars. They are worried their stash might be gone when they get out.

Red Apple. Red on the outside & white on the inside.

They need a GMO “Indian” in the Senate, that reports to the bankers. Brazeau was created as the Red Apple among the Red Necks.
As Murray Porter from 6 Nations sings:  “He’s a Red Man, singing the Black Man’s blues, living in a white man’s world.”
http://www.youtube.com/watch?v=Zvei9Ru7UKs
MNN Mohawk Nation News kahentinetha2@yahoo.com  For more news, books, workshops, to donate and sign up for MNN newsletters, go to www.mohawknationnews.com  More stories at MNN Archives.  Address:  Box 991, Kahnawake [Quebec, Canada] J0L 1B0
at February 11, 2013 No comments: 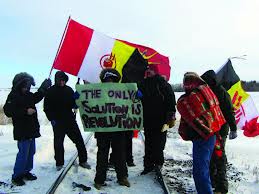 A new day has arrived with the formation of AIM WPG. On Saturday February 16, 2013, AIM WPG will be formally organized. Three of twenty positions on the Grand Governing Council of AIM WPG will be filled in a ceremony at the Thunderbird House on Main Street in Winnipeg.

Ozzie St. Croix is a long time Bear Clan Patrol organizer. He has extensive experience in the area and has support from local patrol members.

Jackie Traverse is a product of Child and Family Services. She is passionate about finding solutions to First Nations Children in Care in Manitoba. She is on record stating that Samantha Kematch is also a victim. (Samantha Kematch is in jail for the killing of her own daughter Phoenix Sinclair) “Samantha was created by CFS and now foster homes and CFS is big business with 10,000 First Nations children in care in Manitoba. They are creating the problems of tomorrow, today.” Traverse has a large group of women and youth supporting her.

Blackwolf Hart-Bellecourt is the son of Vernon Bellecourt, one the founding members of AIM.