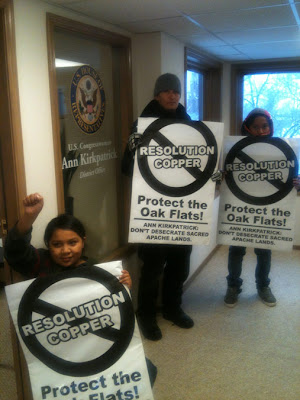 FLAGSTAFF, AZ -- A handful of Dine' protestors showed up in Flagstaff to urge Congress woman Ann Kirkpatrick to "Say No to Resolution Copper! Protect the Oak Flat & stop the destruction and desecration of Apache lands!"
Although the grand opening of Kirkpatrick's Flagstaff office was cancelled due to a snowstorm, two of her staff members we're greeted by the sacred sites advocates.
Kirkpatrick has also contributed to desecration of the holy San Francisco Peaks. In 2010 she joined John McCain and Jon Kyle in pressuring the US Department of Agriculture to permit Arizona Snowbowl ski resort to make snow from treated sewage on the Peaks.

More information about the struggle to protect Oak Flat:

MNN. FEB. 19, 2013. The Pope suddenly resigned because of the documented allegations of child rape, murder and genocide. He was a Nazi youth and an SS officer, which conditioned him to be racist and a eugenicist. An SS officer becomes the Pope!

Pope’s new Vatican uniform!
On December 21, 2012 the Pope said that child rape isn’t bad. It is/was normal back in his day. Pedophilia isn’t absolute evil. Child pornography is normal in society [child abuse]. There is no good or evil, only better than or worse than. This indicates a criminally evil state of mind, devoid of spirit.
The Vatican Bank is the Mafia’s bank. Indian Affairs in Canada states that “any licences, permits and other instruments to individuals and organizations” that exploits our resources belongs to us, otherwise, there would be no need for a cabal known as Indian Affairs. They distribute 10% or more of the interest on our Indian Trust Fund to the Vatican, International Monetary Fund, World Bank, international banks, the Queen and the bloodline families for their continuous war.

Mark Carney laundering Indian Trust Fund.
Currently Mark Carney, former Governor of the Bank of Canada, is moving to Britain to commandeer the Bank of England. We fear that he is trying to take the Indian Trust Fund with him. Some Indigenous people have filed a request for an investigation by INTERPOL into the “biggest bank’ job in all history. Interpol investigates Trust fund fraud
While this genocide is going on in their name, the public looks aside and lets it happen, makes them complicit in it. The kidnapping of our children for the residential school “death camp” program was done by the churches paid by the corporation of Canada with our Indian Trust Funds. This double crime violates the Convention on the Prevention and Punishment of the Crime of Genocide signed in Paris on December 9, 1948.
Kevin Annett was successful in raising awareness of this issue. He did not look away when he learned about the atrocities at Alert Bay British Columbia. He exposed the them  to the point where the Pope is going into hiding to avoid prosecution. The long knives of the bankers and the false monarchies are out to get him. Attempts have been made on Annett’s life. Agents provocateurs are putting confusing spins on him. One agent is known as “Space Cadet” [Cathie Duchene]. A new one is “Tongue-Moll” [Heather Martin], who has several websites devoted to attacking Annett and discrediting ITTCS International Tribunal Into Crimes of Church and State. She has access to platforms where she can defame his character and spew disinformation.
Benjamin Fulford writes a good story on the Pope’s arrest and Queen’s abdication. The fight between the monarchy, the Papacy and the secret societies are all about the ever growing  $30 trillion Indian Trust Fund that the Queen claims to be in control of. Fulford’s analysis

Queenie: “Where’s the trust fund?” Harper: “Carney’s working on it.”
As Paul McCartney sang, “As the jailer man and sailor Sam were searching everyone for the band on the run.” This band of criminals and accomplices are all going to jail. As in their bloodline constitution [Secret Covenant], their greatest fear is that they shall “be cast to the depth from whence we came and remain there until the end time of infinity itself”. Band on the run
MNN Mohawk Nation News kahentinetha2@yahoo.com  For more news, books, workshops, to donate and sign up for MNN newsletters, go towww.mohawknationnews.com  More stories at MNN Archives.  Address:  Box 991, Kahnawake [Quebec, Canada] J0L 1B0