"The Walk has now reached Columbia, Missouri. On September 8th, we will start walking at 9:00 am from St. Charles road just North of exit 131 on Interstate 70. We will go down to Broadway. For anyone in the area please come and walk with us," said Longest Walk 4 late Saturday night.

The walkers said they have used their last funds for gas for their support vehicles, which transport camping gear, food and supplies.

"It has been some time since we put out a plea for help. At this time we need to do so again. At present we spent the remaining money on gas for the two vehicles that were on empty. If anyone has been thinking about donating, now would be a good time. If possible, any Moneygram contributions can be arranged through 202-436-6576. So far we have received about $5,000 in financial contributions and this has gotten us a little over a third of the way. We have also received much in kind support from water and food donations as well as prepared meals, and of course the many words of encouragement and support for which we are all grateful."
Longest Walk 4 Return to Alcatraz
http://www.returntoalcatraz.com

If you believe you can help locating stay places in Kansas, on elsewhere on the route in Colorado, Utah or Nevada, please email the Logistics Coordinator: Wabus44@gmail.com Cell ph: 202-436-6576
Route: www.returntoalcatraz.com

International Tribunal on the Abuse of Indigenous Human Rights

By Brenda Norrell
Censored News
Read Leonard Peltier's statement on the upcoming Tribunal
http://bsnorrell.blogspot.com/2013/09/leonard-peltiers-statement-on.html
ONEIDA, Wisconsin -- The abuse of Indigenous Peoples rights will be the focus of testimony when Native Americans put the US government on trial in Oneida, Wisconsin, during a three day tribunal on Oct. 2, 3 and 4, 2013, at the Radisson Hotel.

The public tribunal will digitally document first-hand witness accounts of 40 years of malfeasance in Indian Country, and the continuing struggles of Indigenous Peoples.

The issues include some of the most censored in the national and global media, including the sterilization of Indian women without their knowledge, the environmental racism that threatens survival in Indian country because of toxic dumping, uranium mining and dirty coal-fired power plants and the arrest of Native Americans carrying out their traditional hunting, fishing and gathering rights.

The Tribunal welcomes testimony on the theft of natural resources in Indian country, including the resources of minerals, coal, oil and gas, timber and aquifer and river water.

The wrongful conviction of Leonard Peltier -- specifically the events that led up to the June 26, 1975, incident on Pine Ridge in South Dakota and the effects on survivors of this period -- will also be a focus of the Tribunal.

Dorothy Ninham, founder and director of Wind Chases the Sun, said, "We have an oral tradition.  In this way, the stories about our 500 years of oppression have been passed down through the generations.  Now, we have the means to record that history and share it with the world.  The Leonard Peltier International Tribunal on the Abuse of Indigenous Human Rights will tell our stories with a focus on the last 40 years."

All Indigenous Peoples are invited to attend.  Tribes are encouraged to send a delegation of tribal elders to participate.

MNN. Sep. 7, 2013. US Senator John McCain was caught playing poker on his cell phone during the planning session to kill Syrian people. He laughed, “The worst part is that I lost $10 grand!” Corporate war-mongers are amoral serial killers. They are sex offenders on a large scale. Both get a kick out of killing masses of people.

Some sex offenders keep souvenirs linking them to their victims. It fuels their sense of themselves and the power they think they have over their victims. Mass murderers take the wealth of their victims called the “spoils of war”. 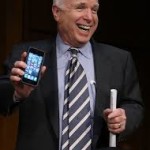 Gruesome killings are carefully planned out, not random. When 150 million Indigenous were murdered, no evidence was supposed to be left that we ever existed. They left no bragging rights on their brutality to scare everybody! Today we are finding Indigenous artifacts hanging on the wall of the corporate monsters, to remind them of their skill in carrying out bizarre atrocities on millions without guilt punishment.

The offenders document their crimes to re-experience the thrill of their debased cruelty. War museums, films and school books show how they can take any victim they chose any way they like and tell it as they please.

Photo: Senator John McCain: “I got bored and had to amuse myself somehow!”

Ben Carnes on the passing of Wanbli Tate

I learned Friday evening that Wanbli Tate had walked on. We had both worked with the LPDOC together as co-coordinators for the support groups.  Blogtalk radio was how we educated others about Peltiers case. I feel it is only fitting that this program be dedicated in his memory.

Leonard Peltier was wrongly convicted and imprisoned since 1977 for a crime the government has later admitted it cannot prove. Over the years, many people have advocated for justice for Peltier, September 12th marks Peltier's 69th birthday, 36 of those years observed in prison.

Join us Thursday for a very special evening on September 12th, with David Hill and other important guests to learn more about Leonard Peltier and the passion to free him by Wanbli Tate.

For more info: www.whoisleonardpeltier.info
To leave a tribute on Wanbli's page: https://www.facebook.com/wanbli.tate
at September 07, 2013 No comments: