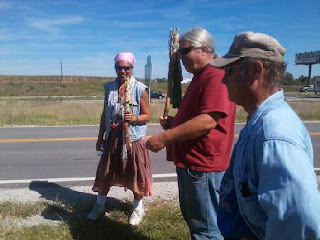 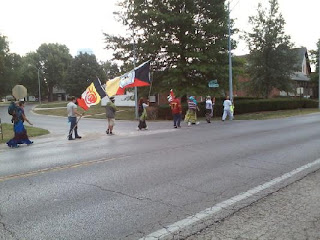 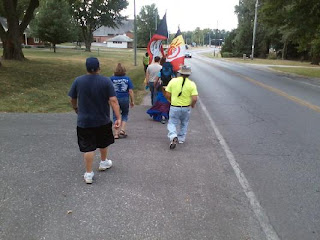 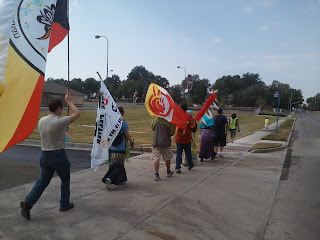 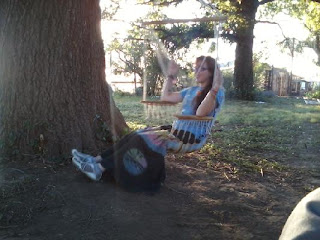 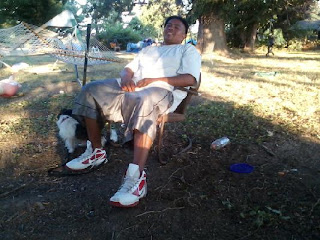 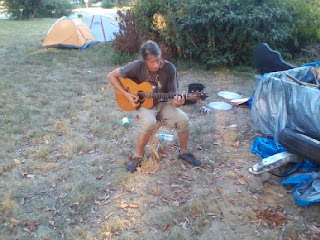 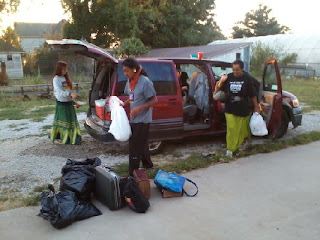 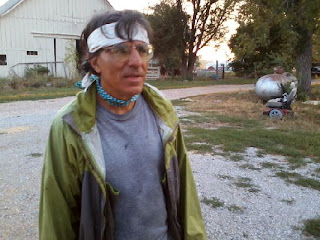 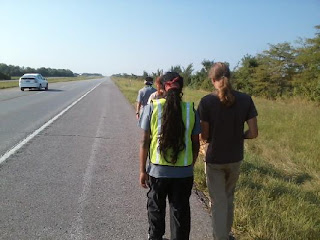 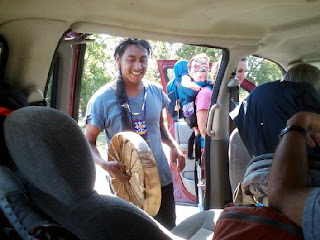 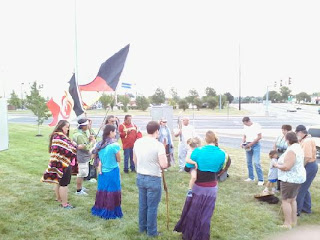 Photos by Carl 'Bad Bear' Sampson, Western Shoshone
Censored News
Thanks to Western Shoshone Carl 'Bad Bear' Sampson for sending these photos from the walkers camp taken this week in western Missouri, on the road into Kansas City, at Kansas City Indian Center and through Kansas City!
The last two photos are of today, Monday, Sept. 16, 2013, a chilly morning in Kansas.
Please support them as they walk through Kansas and on west, with a camping place, hot meals, or by joining the walk on the road!
If you believe you can help locating stay places in Kansas, please email the Logistics Coordinator: Wabus44@gmail.com Ph: 202-436-6576
http://www.returntoalcatraz.com

The route continues through Utah, Nevada and California to Alcatraz:
www.returntoalcatraz.com 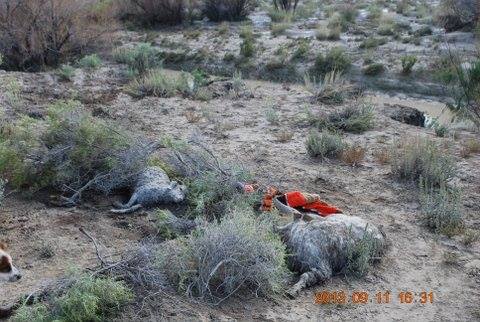 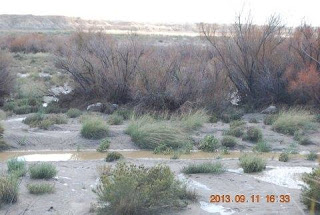 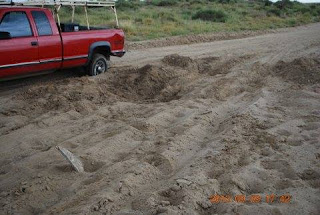 Her son, Andrew, 50 years old, tried to cross the flash flood wash which trapped the goats. The second wave of flash flood, as high as 4 to 6 feet, washed away all 40 goats and Andrew still manage to reach a few goats and pulled them ashore with a rope tied to him. At some point, he also was washed under the water and had to abandon his rescue mission after fighting the water. He was tired and the water was very cold.
Terry told me that she usually leaves her herd of goats inside during severe weather conditions but lately she could not afford the high hay price that skyrocketed in March 2011. So she had to let out the goats to graze.

A Navajo elder, 70-years-old, was stuck here (shown in photo 3) in the wash and slept there until Monday. This is a BIA/Navajo Dept. of Transportation road and bus route. It has been a public road for the past 50 years. Billions of dollars went by and we still have this kind of road on the Rez.

"There are approximately 50 to 80 homes within the flash flood areas and many families are out of their homes. The Navajo Nation opened a shelter in Chinle with the help of the American Red Cross Grand Canyon Chapter. Red Cross volunteers will provide meals, snacks, bottled water and coffee, as well as cots and blankets to flooding victims, however, more volunteers are needed in these communities. Navajo families with children are sleeping outside due to mud, rain, mold and infestation."
http://www.navajo-nsn.gov/News%20Releases/NNDOH/PSA%20Flash%20Flood%20Volunteers.pdf 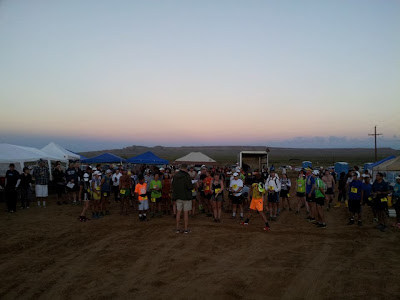 The Hopi run began with these words, "Pray for water," and a huge turnout on Saturday, Sept. 14, 2013. Photo by Andy Bessler, thank you!
Censored News


The Paatuwaqatsi Run began with these words, "Pray for water," as runners began the Water is Life Run on Saturday.
Bucky Preston, founder of the Paatuwaqatsi Run, which is translated in Hopi as, “Water is Life,” reminds the runners that this event is not a race, Preston said in a statement
“Paatuwaqatsi,” he said, “is a remembrance run; the run formed to keep the ancient trails ‘alive’. The Hopi’s believe that the trails are the veins of the village. Therefore carrying on the traditional values by utilizing the trails the villagers keep them open, this helps to keep the village alive and brings the clouds."
The Paatuwaqatsi Run is based on traditional cultural values to remind the Hopi community of these teachings. This event is also open to the public to promote learning and sharing about the roles that water and running play in the Hopi belief system. The event also raises awareness about threats to Hopi springs from coal mining on Black Mesa.
Preston explains, “This run was something that I had always wanted to do for many years. We are forgetting our Hopi values. We are forgetting to help each other out. I want to see that effort return to our community. Putting Hopi life values and teaching at the forefront is the purpose of the run. Why are we taught to run early in the morning? Because running not only strengthens you physically, it strengthens you spiritually. A runner would take one of the many foot trails from the village in the early morning to a spring, take a drink from the spring and sprinkle himself with the cold water. This gave that person strength and provided healing for any ailments. Everything at Hopi involves water—water is life. Now, water is being abused and is depleting. In some places, it is gone and I want to bring awareness to the people.”
Preston reminds the participants that this event is very important to him for several reasons. One main reason is to implement Hopi teachings about water, because this is a very spiritual run. He said, “I work very hard every year to prepare for this run because it gets bigger every year. We always need help fixing miles and miles of trail and it really is a year around job.”
After runners cross the finish line everyone will feast on a traditional Hopi meal while traditional prizes are given to the runners who gave their best during the prayer run.
Bucky said, “It is a very important run for me because we (the Hopi people) must insure the runners understand the importance of water. I put my best effort forward, it is not for me, I do it for the people. I get very emotional when I see people come from far way places. They are very spiritual and very respectful. They come back every year and they are very thankful. It makes me feel joy in my heart that there are people that are very understanding about the importance of water.”

For more information or to register for the run, log onto www.waterisliferun.org

MNN. Sept. 10, 2013. The “Al Qaeda” model for resource theft from Indigenous people:
1. Corporate government is Al Qaeda.
2. Territory with resources is selected by bankers for theft.
3. Corporate puppets are put in who report to the bankers. Given pseudo powers. NGO and supporter agents express interest. Spies and agent provocateurs arrive a few at a time.

4.Indigenous people get wise.
5.Trained rebels with no i.d. are sent in.
6.People are divided up into “conflicting” sectors. Advisors enter the fray and misinform and start fights among them.
7.Civil war is started. Both sides begin to get rough.

Sen. McCain to Al Qaeda: “Hey, partners. Give me your address in Yemen for your Social Security pensions”.
9.Lethal weapons, drugs and other distractions find their way into the target society. Killings, injuries, “suicides’, arrests and disappearances follow.
10.Infrastructure is destroyed. Detractors sent in and offer to broker agreements and issue ultimatums.
11.Old regime out. New puppets are in with names similar to old regime. The people are impoverished.
12.Resources are taken over by outside interests. New council cooperates to keep the peace.
13. Throughout bankers remain behind the scenes directing Al Qaeda.

US and Canada incorporated and set up their Al Qaeda terrorist network known as the “band/tribal council” and “national Injun organizations”. Their job is to undermine the Indigenous people so that Great Turtle Island, our land, resources, funds and rights can be stolen, by any means necessary. The bankers think their scam worked so well, they are now using this model to take over the world.
In the 1980s the US invested $3 billion to create the Al Qaeda terrorist network. The followers were trained, armed, funded and supported.

Great Law has the black wampum for our traitors.
The corporations’ political, economic and military structures are geared towards eliminating the Indigenous obstacles. The “Al Qaeda’ Injun’s job is to divide the target, weaken us and organize opposition. People are recruited within the community, put through the brainwash, greed and genocide program. Some are even trained in military procedures. The enormous sum of money put into their off-shore accounts has had an extraordinary influence. They see the third world conditions of their people they would have to live in if they did not cooperate.
Some honest Indigenous take office to fight against the corporate invasion. When they realize they are part of the power grid to eliminate us, they become silent. The banksters’ corporate war illegally uses our ever-growing $400 trillion Indian Trust Fund to try to carry out their agenda. These fascists tried and lost recently and will again. As Spike Jones sang in war time: “When Herr Goebbels says we own the world and space/We heil heil right in Herr Goebbels’ face”.  Spike Jones: “Der Fuhrer’s Face”.
http://www.pbs.org/wgbh/pages/frontline/shows/network/alqaeda/manual.html
MNN Mohawk Nation News kahentinetha2@yahoo.com Thahoketoteh@hotmail.com For more news, books, workshops, to donate and sign up for MNN newsletters, go towww.mohawknationnews.com  More stories at MNN Archives.  Address:  Box 991, Kahnawake [Quebec, Canada] J0L 1B0  For free download of Mohawk music thahoketoteh.ws
at September 15, 2013 No comments: