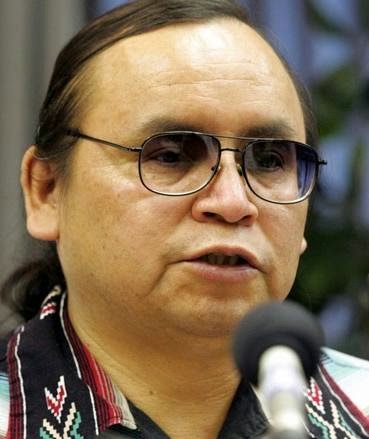 Brenda Norrell, Grand Chief Terrance Nelson and Dr. Pamela Pam Palmater will join John Kane on Thursday, Oct. 23, on a special two-hour edition of WBAI-FM’s “First Voices Indigenous Radio, 10 a.m. to noon EDT /9-11 a.m. CDT / 8-10 a.m. MDT / 7-9 a.m. PDT / 4-6 a.m. HST.
Brenda Norrell—John’s first guest—is the publisher of Censored News. She has been a news reporter in Indian country for 32 years. During the 18 years that she lived on the Navajo Nation, she was a reporter for Navajo Times and stringer for the Associated Press and USA Today. After being censored and terminated by Indian Country Today in 2006, she created Censored News, now its ninth year with no advertising. Grand Chief Terrance Nelson—John’s second guest during the first hour—is Anishinabe, Lynx Clan, Treaty # 1 Territory, Vice Chair National AIM and Former Chief of Roseau River Anishinabe First Nation. Chief Nelson has served as chief for eight and half years. He has been a political activist for more than 30 years and is a self-trained economic strategist. During Nelson’s time as chief, he has built two gas stations/cigarette shops, two gaming centers, settled a land claim for $80.6 million and set a new precedent of $10,064 per acre for agriculture land. Chief Nelson organized the National Day of Action on June 29, 2007, an event that shook up Big Business in Canada. This week, Brenda Norrell and Chief Nelson are attending “Devastating Effects of Boarding Schools on Indigenous Peoples: Second Annual Tribunal on the Abuse of Indigenous Human Rights” in Green Bay, Wisconsin. The meeting is focusing on the experiences of Native children who were forced at early ages to attend Indian boarding schools. Dr. Palmater—John’s guest during the second hour—is a Mi’kmaw and member of Eel River Bar First Nation in northern New Brunswick. She is a lawyer, author, activist and helped lead the Idle No More movement in Canada. Dr. Palmater currently holds the position of Chair in Indigenous Governance at Ryerson University in Toronto. Listen locally in the NYC area on 99.5 FM. The show streams live atwww.wbai.org and will be archived immediately following the broadcast at the same web address (search “Archive”). (Pamela Palmater photo by Michelle Girouard)
Posted by Censored News, publisher Brenda Norrell at October 23, 2014