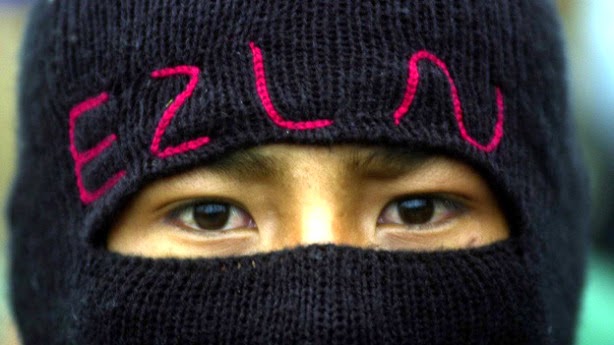 October 2014:
To the students of the Escuela Normal[1] “Raúl Isidro Burgos” in Ayotzinapa, Guerrero, Mexico.
To the national and international Sixth:
To the people of Mexico and the world:
Sisters and Brothers:
Compañeras and Compañeros:
To the students of the Escuela Normal of Ayotzinapa, Guerrero, Mexico, and to your family members, classmates, teachers, and friends, we simply want to let you know that:
You are not alone.
Your pain is our pain.
Your dignified rage is ours also.
-*- 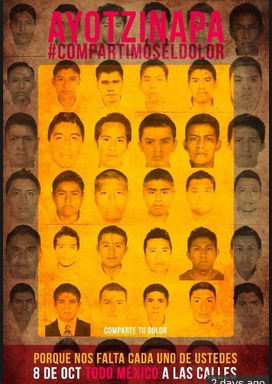 To the compañeras and compañeros of the Sixth in Mexico and the world, we call on you to mobilize, according to your means and ways, in support of the community of the Escuela Normal in Ayotzinapa, and in demand of true justice.
-*-
We as the EZLN will also mobilize, within our capacities, on October 8, 2014, in a silent march as a signal of pain and outrage, in San Cristobal de las Casas, Chiapas, at 1700 hours.
Democracy!
Liberty!
Justice!
From the mountains of the Mexican Southeast.
For the Indigenous Revolutionary Clandestine Committee—General Command of the Zapatista Army for National Liberation.
Subcomandante Insurgente Moisés.
Mexico, October 2014. In the twentieth year of the war against oblivion.
[1] The Escuelas Normales in Mexico are teaching colleges that principally train rural and indigenous young people to be teachers in their own communities.
Translated by El Kilombo
at October 09, 2014