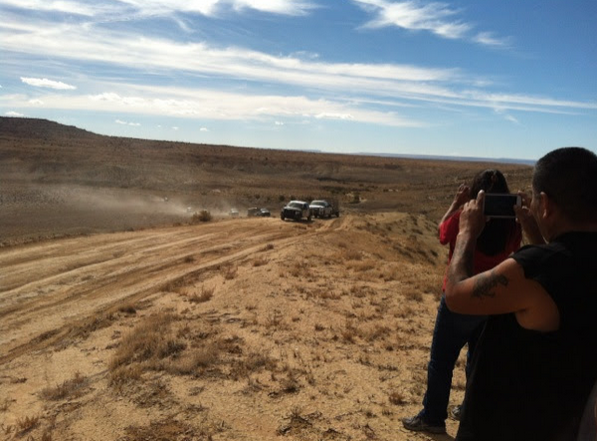 Louise Benally said, Dine' (Navajo) residents face arrest and livestock theft on their ancestral homelands of Big Mountain, Black Mesa, Arizona. These are ELDERS and families that RELY on their livestock for sustenance. It is the US government with their borders and mass forced relocation, amd nearby coal company that is the real burden on communities, the land, water, air and ozone -- not a family's livestock. Call the Bureau of Indian Affairs, the Hopi Rangers, and the Department of Interior. Ask they stop impounding sheep on the HPL. This is current day colonialism, our food sovereignty is being attacked."
Residents are requesting human rights observers and sheepherders during this time of escalated harassment. {*HPL refers to the US-backed 'Hopi Partitioned Lands' located at massive seams of coal}. ‪

By Black Mesa Indigenous Support
UPDATE from HPL (Hopi Partition Land) residents:  Shirley Tohannie and elder Caroline Tohannie  had their entire herd of 65 sheep impounded by the Hopi Rangers (US federal government) Tuesday, October 22, 2014.If the fines aren’t paid the sheep will go to auction, and the family is being told that the sheep will not be able to return to the family’s rangeland.  The cost to release the livestock is nearly $1,000.
Jerry Babbit Lane, the Tohannie’s neighbor on the HPL, was arrested by Hopi rangers when he attempted to check on his neighbors and was charged with disorderly conduct. He was released this evening, 10/23. Rangers told Shirley they plan to take Rena’s (Jerry’s mother) sheep too and that they’re going to start impounding across the HPL.
As we’re writing, another family on Big Mountain has had nearly their entire herd impounded. 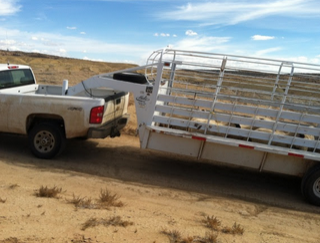 “Call the Bureau of Indian Affairs, the Hopi Rangers, and the Department of Interior. Ask they stop impounding sheep on the HPL. This is current day colonialism, our food sovereignty is being attacked. Call the BIA superintendent Wendel Honanie (at 928-738-2228), the Hopi Rangers Clayton Honyumptewa at (928-734-3601), and the Department of Interior at  (202 208-3100) and ask that they stop the unjust impoundments.”--Louise Benally
Although these orders are coming from current Hopi policy, ultimately the relocation laws and livestock impoundments result from the federal government and Peabody Energy’s divide and conquer strategy used to open up the land for massive coal mining. “In the 1970s, Hopi elders encouraged the Dienh elders to remain on their homelands, saying if they did relocate, the coal mine would expand. The Hopi elders said it wasn’t them who wanted the land.”--NaBahii Keediniihii
A July 2012 report by the Navajo Nation Human Rights Commission classifies the relocation as a massive human rights violation and demands the immediate repeal of PL 93-531 and an end to relocation efforts and harassment in the form of surveillance, livestock impoundments, and disruption of gatherings and ceremonies that the resistance community experiences.
The sheep sustain the vitality of the people and the land, and traditional grazing practices need to be supported not severed. Impoundments are nothing less than harassment and human  rights violations.
For background information on the resistance of the HPL communities, click here.

speaking of censored "news":
both hopi and navajo livestock owners who graze their livestock on the same hopi land in question are subject to the same regulations designed to protect and preserve this sacred land which is suffering from an extreme 10 year drought and extreme overgrazing. not only are livestock owners who graze too many animals violating the grazing regulations but they are violating their sacred trust to protect and preserve this land for future generations. one of the livestock owners whose livestock was impounded was grazing 200 head on land whose carrying capacity was only 50 head! once the the sparse ground cover is eaten down to the rock by livestock it will take many generations for the land to recover if, in this drought, it ever does recover. everyone who is my age (70) has watched the sad desertification over the years of much of the western part of the rez due to drought and overgrazing.

also, where is the story that the ratio of hopi to navajo violators is about 10 to 1 and that impoundment of excess hopi livestock in this area begins on november 3rd.

that's the reality on the rez and hopi and navajo livestock owners who live on this land are all in this together. i fail to see how the incomplete information and inflammatory rhetoric help solve the problem of the land being destroyed by inconsiderate and irresponsible livestock owners, both hopi and navajo, who are killing the land with their disregard of grazing regulations designed to protect it.