Rage and Fury Sweep Mexico, the World: Justice for Ayotzinapa

Rage and Fury Sweep Mexico, the World:  Justice for Ayotzinapa 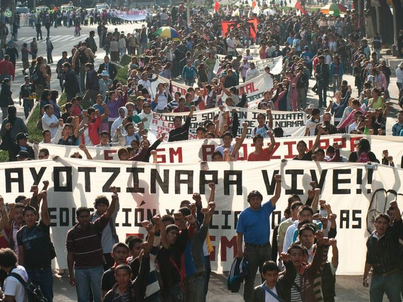 By Frontera NorteSur
Censored News
Oct. 10, 2014Swelling outrage over a police massacre and the forced disappearance of scores of students swept Mexico and the world this week.Tens of thousands of demonstrators demanded justice for six people killed September 26 and 27  by municipal police officers and paramilitary gunmen in Iguala, Guerrero, as well as the safe return of 43 Mexican students from the Raul Isidro Burgos Rural Teachers College of Ayotzinapa reported kidnapped and disappeared by the same aggressors.“Your dignified rage is our rage,” stated a communiqué from the general command of the Zapatista National Liberation Army (EZLN), shortly before 20,000 masked Zapatistas staged a silent march October 8 through the streets of San Cristobal de las Casas in the southern Mexican state of Chiapas.