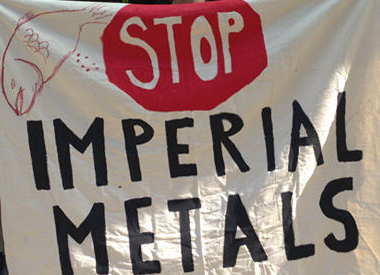 Secwepemc Ts’ka7 Warriors deactivate Imperial Metals Ruddock Creek mine roadInternational Statement, October 14, 2014Censored News
With much discussion with Elders Councils and around Sacred fires and ceremonies the Secwepemc Ts’ka7 Warriors have acted out their collective responsibility and jurisdiction to and in the Ts’ka7 area by deactivating the Imperial Metals Ruddock Creek mine road.Imperial Metals Corporation never asked for or received free, prior and informed consent to operate in Secwepemc Territory. The Imperial Metals Mount Polley mine disaster, in the area known as Yuct Ne Senxiymetkwe, the absolute destruction and devastation of our Territory has never been answered for.  No reparations have been made.   Instead Imperial Metals continues to force through another mine in our Territory while criminalizing the Klabona Keepers of the Tahltan Nation also exerting their jurisdictional and withholding consent from the same company.

By Frontera NorteSur
Censored NewsNew Report Exposes Mexican Dirty WarAfter more than two years of painstaking work, a revealing report on the Mexican government’s dirty war against opponents in the state of Guerrero decades ago will be delivered Wed. Oct, 15, 2014, even as new human rights and political crises engulf the Pacific coast state.Authored by the official Guerrero Truth Commission (Comverdad), the report will be presented to government officials at a session in the tense state capital of Chilpancingo.