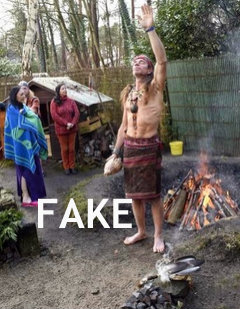 A 'FLEMISH INDIAN -- SELLER OF INDIAN SPIRITUALITY' IN OUR BACK GARDEN!

By A.Holemans (English and Dutch)
NAIS
Original in Dutch

As we said before: “it is that time of the year again”.

Our attention was drawn to an article entitled: “Johan, the  indian of Schoten.” in the newspaper HLNB/Regio.
The article was written by journalist Nina Bernaerts. From journalists one might expect some critical background research but here, apparently, that was not deemed necessary and the journalist appears to be as gullible as the rest of the man's clientele.

We quote from the article:
... the idyllic home of Johan and Sandra Mariën, two Flemings who made Indian culture their way of life.
In their garden there is a large Mongol Yurt, flanked by a sweat lodge.
With his long hair and his modest and sincere character, Johan looks like a full blooded Indian. The age-old ceremonies which Johan now offers are fairly unique in Belgium. "You don't start this out of the blue. I have been with the Kogi indians in Columbia and with the North-American Indians. That is where I learnt the ceremonies. That is fairly unique, for white persons are only rarely allowed there.".........

.........To be Free
A few years ago Johan decided to set up Nature's Call.
"I have done all sorts of jobs in my life, mostly in the technical sector, but eight years ago I'd had enough. I wanted to return to what I was destined for: to be free. I did not want to work for an employer anymore. That's why I set up Nature's Call. We have a little shop and we regularly organize activities."

With Nature's Call, Mariën organizes a monthly sweat-lodge ceremony in his garden. He gets participants from all over Flanders, between 6 and 16 per session.   .......

.......... For Johan Mariën this is a way of life, but also his livelihood : ”Occasionally I find it difficult to leave aside my mobile phone and computer”, he admits, “but I have managed to turn my way of life into my job. That is fortunate.”

End of quotation. We omitted the description of the actual ceremony in which the journalist participated.

Nature’s Call, and the shop on the premises of the Flemish Indian, have a busy agenda. Here is a selection from their spring-offer:
“Traditional Songs Teaching Circle” – “Inipi” (Sweat-lodge) – “Munay-Ki-Fire & Despacho” ceremony.
And in collaboration with Vernon Foster: “Drumcircles”, “Workshop Healing Medicine” etc.
Their newsletter highlights the words of Vernon Foster: “Spirituality cannot be adapted to your lifestyle, but you can change your lifestyle to increase your spirituality.” A fine slogan, but it has the effect that Flemish Wannabees want to be more Indian than the Indians.
The name of Vernon Foster is a great crowd-puller, but who is Vernon Foster?
A bit of research teaches us that Foster, just like Steve McCullough, has been active in the business of selling indian spirituality in the USA. Sometimes he claims to be Lakota.
He is known to have sold his show in Switzerland, Germany and Brazil.
In Brazil he collaborated with a Brazilian bogus-shaman named Carlos Sauer.
His name is also linked to the sweat-lodge drama in Sedona.
Like so many frauds, Vernon Foster poses as an AIM-activist. That seems to be fashionable around here.

Let’s be clear about this, AIM is not an organization that Tom, Dick and Harry can claim membership of.
AIM is a movement of local groups fighting for the rights of American Indians in the USA. You can support them by making their actions known to the world. But putting the AIM logo on drums, flags and other native-style objects to increase sales, is objectionable.
By claiming that they are AIM-activists, the fraudsters possibly hope to avoid critical questions about their “struggle for justice for the Indians”.

The same holds for Idle No More!
Idle No More is a movement born from grassroots groups. Do not use their logo to increase sales.  Support Idle No More by making their actions known to the world and by answering their ‘call for Action’.

The same holds for the Free Peltier motto and Peltier’s image. If you want to sell drums and other “Indian stuff” for profit, don’t do it in the name of Leonard Peltier. Unless the profits are forwarded to the ‘Clemency for Peltier’-project.

So, Nature’s Call: stop that trade!
Make and sell your drums as you like, but don’t call them “shaman” drums and remove the logos of movements and hard-working organizations.
. 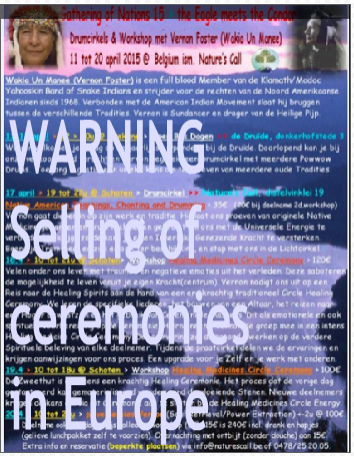 WARNING: THIS EVENT IS SELLING THE SACRED!

Wakia Un Manee (Vernon Foster ) is a full member of the Klamath/Modoc Tahooskin Band of Snake Indians and warrior for the rights of North American Indians since 1968.
In connection with the American Indian Movement, he’s building bridges between different traditions.
Vernon is Sundancer en bearer of the Holy Pipe

11-12 Open Days at the Druïde : shop, and Vernon will lead a drum circle with Powow drums.

17 till 19 April, Schoten : Native American Teachings, Chanting and drumming. Vernon will bring original Medicine chantings en drum techniques to connect us with the universal energy. So you can discover your own inner healing force. Come to the circle of light.
Price 35€

18 april : Vernon invites us on a voyage to the Healing Spirits  with a forceful traditional Circle Healing Ceremonie. We’ll be traveling to a higher consciousness with the use of ceremonial masks. After that will Vernon take us with him in a intensive Healing Medicine Circle Ceremony .
Price 120€

O, and shop will be open all day, every day!

First, Foster is not Lakota. He is Klamath and Modoc, very different traditions from the Lakota.

Foster is clearly selling ceremony, which is not only unethical and harmful, it also makes the ceremonies useless.

He has done this in so many places that it is not possible for it to be the fault of others.

And for those who still don’t get it:
Oron Lyons, Onondago says:

Why come to us?
You think we turn our Elders over to anyone who walks in at the door?
What do you want from the Elders?
Secrets? Mysteries?
I can tell you right now, there are no mysteries.
Only common sense!

....wisdom comes only when you stop looking for it
and start truly living the life the creator intended for you.

For the white people a medicine means something completely different as for the Indians.
White people just don’t understand it.

“You want to know who’s a real medicine man?
He’s the one who doesn’t say
“I am a Medicine man”
You’ve got to go and ask him.
And you’ll find he’s always there among his own people.