Parents of 43 Kidnapped Students to Speak in El Paso 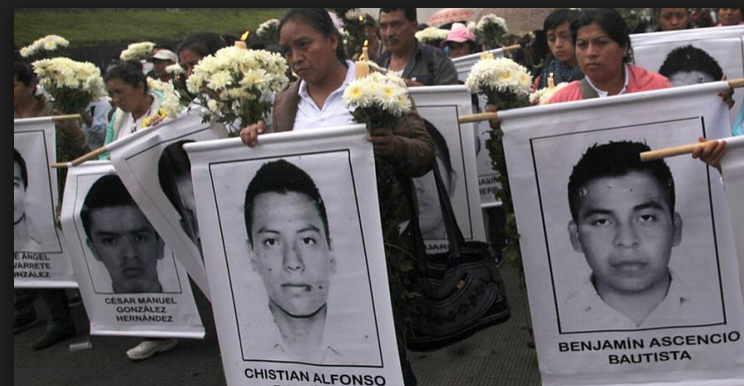 EL PASO, TEXAS --  The parents of the 43 students kidnapped in late September in Guerrero, Mexico will visit El Paso on Monday, March 16 and Tuesday, March 17 to speak to about their children’s experiences and about the human rights violations occurring in Mexico. The parents will be available to speak at a press conference on MONDAY, MARCH 16 AT 10am AT THE FARM WORKERS CENTER (OREGON ST & 9TH). The media and the public are invited.

The parent’s visit to El Paso forms part of a national speaking tour of the United States during which they will speak in cities across the country to audiences in churches, universities, community organizations, and labor unions about the events of September 26, 2014 when police and gangsters killed six, wounded 25, and kidnapped 43 students of the Ayotzinapa Rural Teachers College. The parents have continued to demand that their children be returned to them “alive as they were when they were taken.”

"The invitation of people of the United States to share our struggle is very timely since our plan is to travel to Central and South America and to Europe from where we have already received more invitations," said Felipe de la Cruz Sandoval, a representative of  the Ayotzinapa group. "It is important that both citizens and government leaders of other countries are aware of the injustices in Mexico and the international community see what is the globalization of repression," concluded Mr. Sandoval.

The parents plan to take their case to the Inter-American Commission, Amnesty International and the United Nations. Organizers of the national caravan hope that the parents’ presentations will not only educate the American people about the human rights violations taking place in Mexico, but also lead American citizens and representatives to consider the hundreds of millions of dollars that the United States provides to Mexico through Plan Mérida for military equipment which has been used by the army and the police against Mexican citizens in violation of their rights.

While in El Paso the parents of the kidnap victims are being hosted by La Red Binacional Por Ayotzinapa, a local coalition made up of organizations from El Paso and Ciudad Juárez.

Estanislao Mendoza Chocolate is the father of Miguel Angel Mendoza Zechariah (disappeared on 26 and 27 September).
“I am a father of a young man that’s missing whom I'm looking for along with other parents in the group. I am here because it is necessary to look for my son and all the other students. I don’t think anyone would like to be in this position; its not our choice. The Government has taken away our children from us. I know the Government doesn't like what we’re doing but we will do whatever is necessary. Before this happened I knew nothing about protesting. I was happy in the fields just working, and now during the last few months I have abandoned my house and my children, hoping to find the one that’s missing. I want to find him and reunite him with the rest of us so things can be as before, although I think that nothing will be the same, because after this, I do not think that the Government will leave us in peace. Other issues will come up and that’s what I fear, that when this is over, the Government will come by and take us one by one...there is the fear of what will happen then? Who can guarantee my safety? Where will I go? Can I go live in another city? I would not leave my people, leave all behind, my family, That is the fear I have once we’re finished with all this.”

Blanca Luz Nava Velez  is the mother of Jorge Álvarez Nava, (disappeared on 26 and 27 September). She is a farm worker mother of two children.

“I miss my son very much. He used to sing to me and we were very close.
He used to like music and was always by my side because he was the type that gets sick a lot. I miss my home, my children, my grandson, who is now already a big boy.”

Angel Neri of the Cruz Ayala is a surviving witness of the events in Iguala, Guerrero, in which 43 students were forcefully disappeared. He is a second year student on a BA program on elementary education in the Raúl Isidro Burgos, teaching academy of Ayotzinapa, and Chair of the student disciplinary code committee.

“I am originally from Acapulco, Guerrero, and survivor of the events which took place on 26 and 27 September 2014, I am 19 years old. Before looking into the Ayotzinapa teaching academy I wanted to study in the school of Medicine of the University of Guerrero in Acapulco, but my family has serious economic problems, so I decided to enroll in the  Ayotzinapa academy. Ayotzinapa is very different from other schools, because they give you a one week probation period to be sure you’re really serious. Before enrolling my idea was the following: be academic and get me to the Rondalla, since I like to play guitar. However, in study and development groups a thirst was born in me to know more, so when they opened the call for the activist cause I joined with 11 of my peers. We had political and social training that included forming committees to visit other rural academies and social organizations inside and outside the State.

As students in Ayotzinapa, we are called vandals and guerrillas. Some people say we are of the worst kind, but it is people who don't know the conditions in which we live, and the reasons for which we strive, because as long as there is poverty the Ayotzinapa school will have reason to exist even more. As a result of the events we have seen the need to interrupt our studies within the teaching academy, this is only a small part of what I have lived within the Rural Raúl Isidro Burgos school in Ayotzinapa.”

Josimar de la Cruz Ayala, has a degree in Sociology of Communication and Education from the Autonomous University of Guerrero.

“I am the eldest of four children. I grew up in an atmosphere of good values, where  respect for others is expected as well as the fight for equality. I have always tried to be a good example for my brothers. I have no vices; I don't smoke, I don't drink, nor do I use drugs. I am married, a father of an eight-year-old who is my life. She is a reason for me to be in this struggle. I don’t want the present in which I live to be her future.  I am currently unemployed; I got fired for being part of this group.”
at March 15, 2015