Authentic Journalism: Narco News as You Know It Could End in 15 Days 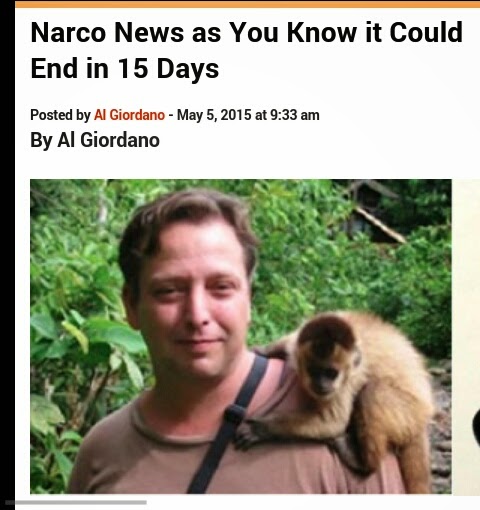 I've always been honest with you.

That's why in all the years that we've been reporting at Narco News I've never used the common fundraising tactic of "crying wolf," of saying we'll have to close shop if we don't reach our money goal. We've learned to get by on a fraction of what others would consider too little to do this work, because it's the work – and not the money – that we love.

But if I'm going to keep being honest with you I have to tell you that I am worried about the future of Narco News and the school, especially if you, the readers, don't get us to our $25,000 goal by May 19 to make a 2015 School of Authentic Journalism possible.

The school is the crown jewel of this project. It's what draws and brings new talent to the work of authentic journalism, and provides for the intensive training of the next generations of those who will carry on this work.

It's not enough for grizzled veterans of investigative journalism like Bill Conroy and I to keep reporting until we no longer can. That's how too many good journalists and too much good journalism faded out of society in the first place. You've probably noticed that experienced journalists too often become more isolated and alienated as years go by until they've painted themselves into a dark and cynical corner, and readers stop responding to their work.

No, the renaissance of authentic journalism has grown thanks to the School of Authentic Journalism, because it is regularly refreshed with new blood, fresh ideas, and "the wisdom of youth" that knows that our work has to constantly evolve. It's that kind of enthusiasm and wisdom that made the new Narco News TV video – "Danger: Journalists Crossing" – possible.

Have you seen the new NNTV video yet? It's a wonderful example of how we confront injustices differently than most – with humor and a sense of fun, while also involving the people who too many journalists treat as "product" in the telling of their own important stories. Check it out:

In just five days, it's received more views than most documentaries will ever see – 35,000+ on Facebook alone. And the creativity and talent of the scores of young people who participated in making the video – Central Americans and authentic journalists who played acting roles, and all the skilled volunteers who wielded the cameras and designed the sets and the score and artwork and edited it so superbly – are a direct result of the School of Authentic Journalism. The idea for this video, in fact, came out of a brainstorming session at the 2014 school.

It was also the younger people at the school that told us we should directly post the video to Facebook and not just on YouTube and NNTV, because, they said, "Facebook is where we're watching videos now." And based on the quick and viral response, that was clearly good advice.

Which brings me to the point of this letter.

Two weeks ago we launched a fundraising campaign on the online platform Kickstarter to fund the 2015 school. If we raise $25,000 by May 19, there will be a school this year. If we raise twice that, we'll be able to invite English speakers to the school, too, and translate all its sessions. Half of that time has elapsed, and while more than 50 readers have pledged more than $6,000, we're not at half of the goal yet.

The way that Kickstarter works is that people make pledges, using your credit or ATM cards, but the money only gets billed to you if and when the project meets its goal. If we can get closer to the goal before May 19, there is another group of potential donors who watch the campaigns on Kickstarter and are famous for putting worthy fund drives over the top: they're people who like to make a difference with their money to make good things happen. Just yesterday, Kickstarter declared our campaign a "Staff Pick," which will help some in the final stretch toward the goal, but in the end we'll rise or fall based on whether the people who know our work best decide to pitch in or not.

If we don't reach the $25,000 goal, the Fund for Authentic Journalism won't receive a cent.

And while it's likely that the best of those who have pledged will probably just go ahead and donate that amount anyway, because the journalism of Narco News is also important to them, it won't be enough to hold the school this year.

And if there is no School of Authentic Journalism this year, I'm worried for the future of this project, and not just because we want and need the fresh energy and talent of the next generation of authentic journalists, although that in itself is a big thing.

The consequences would include that there will have to be changes in what we can do with Narco News itself.

I'm not talking about deleting the 15 years and thousands of stories and videos we've reported. That's a priceless archive that I'm committed to keep online without charging readers or selling ads, even if it means I have to go out and find another job to be able to pay the bills.

Nor am I saying that Narco News would have to stop all its reporting. It would have to, however, scale down - for a while at least - while I consult with those most involved about what we can possibly do to carry on a renaissance without resources.

The consequences of that for the coming days of Narco News would not be light and transient.

Over the years, now and then, some larger donors have come forward to make the school and our work possible. But large donors are fickle, and they're not used to dealing with projects of fierce independence that will not change our way of doing things just because a benefactor would like us to do so.

But if that is the price of integrity, no matter how high, it's a price I've always been willing to pay.

It's now in your hands, and that of the rest of the readers and supporters, to decide whether that price is so high that Narco News as we know it and love it could cease to exist. And you are going to vote on that decision in the next 15 days with your donation – no matter how large or small, it's always been many modest ones that kept us going – at this link:

As a young man I was very inspired by a phrase I heard in Richard Attenborough's movie, Gandhi, in which Ben Kingsley played the role of the organizer of India's independence from colonial rule, when he said: "If your cause is just, the resources will come."

(I've never found a quote in which the real life Gandhi ever said that, but it had a profound influence on me nonetheless.)

That's been the philosophy of Narco News and the School of Authentic Journalism for 15 years now.

But whereas for many years this project was a pioneer of online fundraising to be able to do a kind of journalism that did not have to answer to advertisers or a few large donors, today everybody is trying to do the same. These days you get bombarded daily with urgent appeals from a great many projects. It can get so overwhelming, "fundraising fatigue" inflicts many, that good people start tuning out and stop responding to any such appeals. But if you've opened this letter and have gotten this far into reading it, you obviously care about whether Narco News and its school can continue or not.

The problem is this: Even though I know that these days like never before you are besieged by an overdose of emails and social media messages asking for your donation for all kinds of causes, and that makes it harder to reach you when at a time like this we really need your help, if we get to May 19 and we haven't reached our goal, I'm going to have to consider the corollary of that quote: If the resources don't come, could it be that our cause is no longer just?

While I'll know in my heart that's not the case, it's still going to feel like that. And, more practically, with no 2015 School of Authentic Journalism on the horizon, and however modest bills to pay, not even I am going to be able to put as much time into Narco News because I'm going to have find other work.

I haven't had to do that much over the last 15 years. I was 40 when I launched Narco News, and now I'm 55. I still don't own a house or a car or a credit card. I still live "close to the land," South of the Border, keeping my expenses low. I still don't have health insurance, which probably is not recommended for a guy my age. But I don't mind any of that. Being able to do this work is a privilege. The School of Authentic Journalism has made all that worth it: to be able to bring new generations into a work that previously was done only by a very few has been immensely meaningful, and a way I've been able to give back after so many mentors who have passed from this world similarly invested in me as a young man.

But to be able to keep investing in these "kids," I need you to invest in them, too. The last 15 years have amply shown that the returns on your investment are guaranteed to be manifold.

Make a pledge, please, to the Kickstarter campaign for the School of Authentic Journalism today. Click here:

There are still 15 days to rescue the school and everything, including the newspaper, that goes with it.

If we don't reach the goal, nobody will be happier than the powerful interests we've made uncomfortable for 15 years, and even some who logically ought to be supporting us will also cheer because it's more bothersome to them that they were never able to control us. That's life. It's unfortunately how small minded people can be.

But you're not one of those.

You and people like you are the people who can save the day.

Is this cause still just? Vote with your pledge via this link:

From somewhere in a country called América,

Posted by Censored News, publisher Brenda Norrell at May 05, 2015