Tribes Disrespected by Federal and State Officials in Grizzly Fight

Tribes Disrespected by Federal and State Officials in Grizzly Fight

“They literally pulled the plug on me and escorted me out,” recounts Walks Along, who described feeling threatened during the incident." James Walks Along

CODY, WY.  05-08-2015 -- James Walks Along was forced to abandon an address to the Yellowstone Ecosystem Subcommittee (YES) of the joint federal and state Interagency Grizzly Bear Committee (IGBC) by Brian Nesvik, IGBC Chair and Wyoming Game and Fish Department (WGFD) Wildlife Division Chief, at the committee’s meeting in Cody, Wyoming on April 30, 2015.

“This has never happened before,” said James Walks Along, the Tribal Historic Preservation Officer for the Northern Cheyenne Nation. “I was shocked by the disrespect I was shown.”

The YES-IGBC is a joint federal and state agency cross-jurisdictional body that takes the lead on grizzly bear management in Greater Yellowstone. In 2013 the YES-IGBC voted to delist the Yellowstone grizzly bear from the Endangered Species Act (ESA) and supports opening trophy-hunting seasons on the grizzly.

Walks Along stepped forward to make a statement on behalf of the Northern Cheyenne Nation during a presentation by Dan Thompson of WGFD entitled “Grizzly Bear Management on Tribal Lands” that emphasized collaborations between Tribal Nations and state and federal agencies.  The three tribes identified by Thompson as collaborators, the Eastern Shoshone Tribe, the Shoshone-Bannock Tribes of Idaho, and the Northern Arapaho Tribe, all hold seats on the YES-IGBC.

Though members, none of the tribes were represented when the YES-IGBC voted to recommend delisting.  All three tribes have since officially opposed delisting the Yellowstone grizzly bear, a fact omitted by Thompson, even though he was furnished with those resolutions prior to the meeting.

The Northern Cheyenne Tribe was the first of what is now 33 Tribal Nations to officially oppose the US Fish and Wildlife Service’s (FWS) planned delisting of the Yellowstone grizzly bear.   Walks Along hadn’t finished introducing himself before Nesvik stepped forward and attempted to usher him from the stage.

“I will make a statement, and I shall not be neglected on this statement,” Walks Along told Nesvik.

Nesvik twice laid hands on Walks Along to remove him from the stage before he instructed Tara Hodges of WGFD to cut Walks Along’s microphone.

“They literally pulled the plug on me and escorted me out,” recounts Walks Along, who described feeling threatened during the incident.

“They disrespected me and the Northern Cheyenne Nation by not allowing me to read our tribe’s official resolution in opposition to delisting and trophy hunting the grizzly bear,” asserts Walks Along. “This showed their disdain for the government-to-government process, and it was disrespectful to all tribes.”

Northern Cheyenne Tribal President, Llevando Fisher, “fully supports what James Walks Along did for his nation and the grizzly.”

“I am extremely disappointed in the disrespect that was shown to our official representative,” continues President Fisher. “I told James, ‘Don’t back down, and if you have to wait to say your piece, just wait.’ ”

Walks Along waited almost two hours to summarize the Northern Cheyenne Nation’s opposition to delisting the grizzly bears and the trophy hunts advocated by the state game and fish agencies of Wyoming, Montana and Idaho, his statement being relegated to the 3-minute public comment period by YES-IGBC Chair Nesvik.

Walks Along addressed FWS coordinator Chris Servheen, long-dubbed the government’s “grizzly czar,” and requested that the formal consultation process with the affected tribes be initiated.

“I have allied with 18 tribes on the Northern Plains, including all of the Lakota tribes, and I will relay this message that I have formally asked you to consult with all 18 of us,” he advised Servheen.

Walks Along emphasized the spiritual significance of the grizzly bear to the Cheyenne.

“This Holy Mountain of ours, Bear Butte, is named because of the mightiness of the grizzly. We have a lot of history with this great animal, and many stories. Grizzlies are like humans. We respect them for being like us,” he explained.

Walks Along then asked the committee if his sons could sing a healing song for the grizzly, but was told they could not because the public comment period had closed. However, Chairman Nesvik then permitted two white ranchers to take the floor.

President Fisher is skeptical of FWS coordinator Servheen’s familiarity with the consultation process.

“A tribal resolution is an official government action. This resolution opposing the potential delisting of the grizzly was fully supported by the Northern Cheyenne Tribal Council in a unanimous vote. The US Fish and Wildlife Service, like all federal agencies when dealing with Indian tribes, has a trust responsibility to the tribes. We are surprised they didn’t have some kind of direction for Servheen,” President Fisher discloses.

GOAL Tribal Coalition Co-founder, R. Bear Stands Last, says that the irony that Walks Along’s ordeal came during a presentation on “touted” tribal collaboration should not be lost on people.

“It is a very disturbing and symbolic visual. The domineering government official silencing the Indian and having him removed,” he says. “Nothing says ‘collaboration with tribes’ like forcibly removing a Cheyenne Sun Dancer and official tribal representative from the stage.”

“I would urge everybody to watch the video. If you don’t see a microcosm of colonial domination you must have clicked the wrong You Tube link,” Bear Stands Last asserts.

For regular email updates on this issue click here 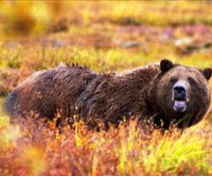 Posted by Censored News, publisher Brenda Norrell at May 09, 2015