US lies to UN about spying on activists 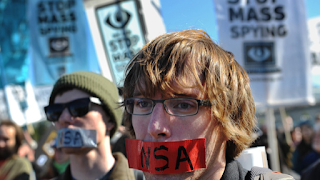 By Brenda Norrell
Censored News
Update: 'World concerned over racial discrimination in the US'
http://www.bsnorrell.blogspot.com/2015/05/un-world-concerned-over-racial.html

The United Nations Human Rights Council reviewed the United States human rights record today. The US lied about its spying. The US responded that the US "doesn't collect intelligence to suppress dissents or to give U.S. businesses a competitive advantage ..."
In both cases, the facts prove otherwise.
It is a fact that the US spies on activists and stalks them, imprisons whistleblowers, and uses provocateurs and entrapment to jail activists. Further, the US uses intelligence gathering for business and trade insider knowledge.
During the Universal Periodic Review of the US Human Rights Council in Geneva, the response of countries proved that the world is watching.
Foremost, the US was pressed  by many countries to halt police violence toward ethnic minorities.
The United States admitted its failures in regards to civil rights, in response to the murder of unarmed black men by police. However, the US did not admit its role in torture and kidnappings in violation of the Geneva Conventions. The US did not justify its drone assassinations or its widespread prison-for-profit scheme, where corporations enrich themselves from the capture and imprisonment of migrants at the border, including women and children.
The United States did not explain COINTELPRO which targeted Black Panthers, American Indians and Chicanos. The US did not explain why it selected Israel's defense contractor Elbit Systems to build spy towers on the US border in Arizona, including spy towers on the Tohono O'odham Nation. Elbit is responsible for Apartheid security surrounding Palestine.
Further, the issue was not raised of the US ATF (Alcohol, Tobacco and Firearms) which has been arming the drug cartels in Mexico since 2005, in Project Gunrunner, Operation Wide Receiver and Fast and Furious. There was no mention of the hundreds of US Border Patrol agents and ICE agents arrested for drug smuggling and serving as "spotters" for the cartels to cross the border with their loads. The US did not discuss how US Border Patrol agents have committed rape, and the murder of teenage rock throwers.
Earlier, after the UN review of the United States human rights record in 2010, the United States rejected the recommendation to "Recognize the United Nations Declaration on the Rights of Indigenous Peoples without conditions or reservations," as recommended by Bolivia.
After the review in 2010, the US accepted 171 recommendations and rejected 71.
As for denying the facts at the UN today about NSA spying regarding activists and spying to benefit US trade and business,

AP reports: Several countries including Brazil and Kenya voiced concern over the extent of U.S. surveillance in the light of reports about the National Security Agency's activities.
David Bitkower, a deputy assistant attorney general, responded that "U.S. intelligence collection programs and activities are subject to stringent and multilayered oversight mechanisms." He added that the country doesn't collect intelligence to suppress dissents or to give U.S. businesses a competitive advantage, and that there is "extensive and effective oversight to prevent abuse."
Read more: http://www.nytimes.com/aponline/2015/05/11/world/europe/ap-eu-united-nations-us-rights.html?_r=0
In fact, the US not only targets activists with spying, but also targets world leaders.
While Sec. of State, Hillary Clinton ordered US Ambassadors to collect DNA and iris scans on world leaders and activists from the Americas and Africa, as exposed by Wikileaks.
Indigenous activists in the Americas, including Mohawks and Mapuche, were targeted by US State Dept. spying. Bolivian President Evo Morales and Venezuelan President Hugo Chavez were constant targets of US spying.
The US was questioned on the widespread imprisonment of migrants, including children, and drone assassinations.
http://www.dailysabah.com/americas/2015/05/11/us-admits-failure-of-commitment-to-civil-rights
The United States was not honest about its treatment of migrants. The U.S. delegation said that every effort is being made to protect their rights, including those to avoid the exploitation of children.
As Al Jazeera points out, international law bars the imprisonment of children for immigration purposes, and the US has not been held responsible for torture.