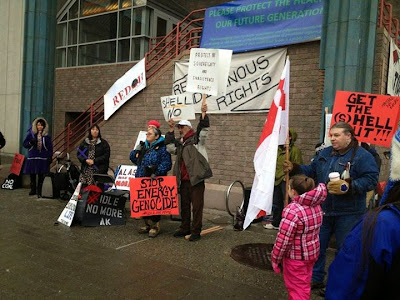 May 21, 2013 at 2:44pm
FOR IMMEDIATE RELEASE:Extreme Energy development is a risk for investment and the planet, Indigenous delegates tell Royal Dutch Shell shareholders in The Hague, Netherlands

Tuesday May 21st, The Hague, Netherlands- Today members of the Native Village of Point Hope, Alaska and Athabasca Chipewyan First Nation (ACFN) attended the Royal Dutch Shell AGM to confront the Chairman and Board over Shell's decision to pursue highly risky 'extreme energy' projects without adequate consultation and accommodation of Indigenous communities. Projects such as Arctic off-shore drilling and tar sands will have little long term benefit for the company, and expose it to reputational damage, political and financial risk, including litigation.

Mae Hank, representative of Resisting Environmental Destruction on Indigenous Lands (REDOIL), attended the AGM to bring forward concerns regarding Shell’s Arctic offshore activities. Litigation, along with several other incidents has helped slow the rush to drill in the Arctic but the Tribal communities remained concerned Shell has not heeded these warnings.

“Shell has stated that despite their current 'pause' in their Arctic offshore Alaska activities, the company is committed to drill there again in the future,” she said. “As an Inupiat Mother and Grandmother, I strongly oppose this plan, as do a majority of Inupiat. There is still no viable spill plan in place not only for cleaning up spills but how the company will compensate our community for the loss of food and food security. I asked the Chairman and the Board to explain how they would compensate our community’s food security and needs when the next major oil spill disaster happens. The Chairman and the board simply danced around the question and did nothing to quell my concerns.”

Despite being plagued with substantial problems throughout and after the drilling season Royal Dutch Shell plans to continue it’s efforts for exploratory drilling in 2014 in the Chukchi and Beaufort Seas,pursuing an aggressive plan for offshore drilling extraction in America’s Arctic Ocean. The massive drilling plan projects an estimated 174 exploratory and extraction wells within critical habitats of culturally sensitive marine mammals.  Shell Oil and associated agencies lack huge gaps of information of the harsh conditions, current and tidal systems, ever changing and unpredictable ice, and dangers of the Arctic Ocean; in turn, which could potentially lead to a very large oil spill. An oil spill in the remote Arctic ecosystem would be devastating – currently, there is no effective way to cleanup an oil spill in Arctic conditions, and there is a lack of infrastructure in the region to support an adequately safe drilling or cleanup program. The company has spent $4.5bn securing permits to drill in Arctic waters, however they have been proven incapable of operating in the area. Shell’s experiences should be a cautionary tale as decisions are made about whether to authorize these activities in the future.

Faith Gemmill, Executive Director of Resisting Environmental Destruction on Indigenous Lands states “Shell’s profit driven desire to drill in this fragile yet harsh Arctic environment is senseless when you look at their record of accidents and mishaps this past year already.  It is absurd that they still desire to move forward in the Arctic, while they are absolutely not capable of standard operations in arctic conditions. We attended the Shell AGM to urge shareholders to recognize the serious risks of Shell’s pursuit in the Chukchi and Beaufort Seas of Alaska. We support a moratorium on offshore drilling in Arctic Waters, due to serious harm and risk to Inupiat subsistence and cultural rights.”

Will gladly have people stay at my place in the hague...