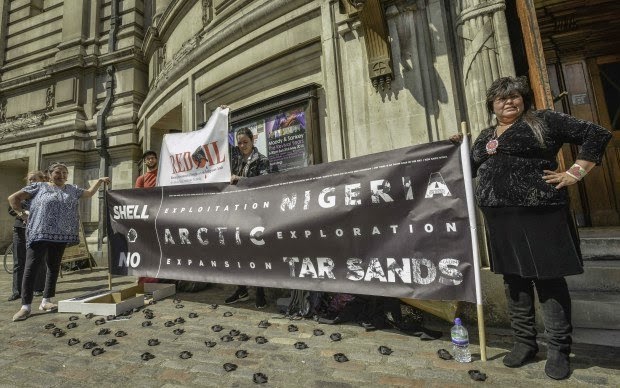 LONDON and NETHERLANDS -- Today, under the shadow of Big Ben, a delegation of indigenous women was joined by campaigners to protest Shell’s plans to drill in the Arctic. Mae Hank and Faith Gemmill-Fredson travelled to Shell’s Annual General meetings in the Netherlands and London directly after taking action in Seattle last Saturday on a mass “flotilla” where kayaktivists blocked Shell’s Polar Pioneer drilling rig docked at the Port. At the shareholders meeting in London handmade black origami “roses of resistance” were laid at the entrance by UK Tar Sands Network and Platform to demand an end to the expansion of the Canadian tar sands and the exploitation of people in Nigeria plus standing with communities resisting Shell’s plans to drill in the Arctic this summer. A box of resistance roses were hand delivered to the Shell board.
“Shell has left a toxic legacy across the globe and continues to ignore the global community who are calling for real action on climate change [1],” said Suzanne Dhaliwal who delivered the ‘roses of resistance’ to Shell. “It is incoherent to be pushing ahead with the Alberta tar sands and exploring the Arctic when the science is clear, we need to keep fossil fuels in the ground. Today I hand-delivered ‘roses of resistance’ to the Shell board in London in solidarity with people from Nigeria, the Arctic and the Tar Sands who are feeling the impacts of Shell’s reckless operations and who are shouting loud and clear to stay out of the Arctic.”
“The Arctic drilling plans of Shell deserve world attention now, we came here to display our resistance to the company’s dirty energy plans for the Chukchi Sea in Westminster, London,” said Gemmil-Fredson. “Indigenous Peoples of Alaska should not have to sacrifice subsistence livelihoods to meet the bottom line of this company that has proven at the shareholder meeting in the Netherlands yesterday, that they are ill equipped to drill in the Arctic. We are concerned about the global climate crisis, our Alaska Native communities are hit hardest by the current climate chaos, which Shell is pushing further into. We oppose Shell’s use of false solutions to climate change like carbon capture storage, carbon trading and REDD, this is simply an attempt to greenwash its destruction of the Arctic and the world [2].”
“Shell’s meeting today in London meeting was only open to shareholders, However, the indigenous people are the major stakeholders in the region,” said Mae Hank, community activist and grandmother of 17. “Shell cannot clean up spilled oil in broken ice conditions, no one can, they want to proceed with their psychotic Arctic drilling plans for the Chukchi Sea despite the fact that there is a 75% chance of disaster. Shell’s plans will impact our food security, it threatens our way of life. The international solidarity that we saw today from the people of the UK helps us to stay motivated as we continue this battle to keep Shell from devastating our way of life and pushing the global community into climate crisis [3].”
“Today we delivered black roses to symbolise mourning and solidarity with the communities in the Niger Delta and Canadian tar sands whose lives are ruined by Shell’s oil drilling,” said Sarah Shoraka from Platform. “20 years after the execution of Ken Saro-Wiwa for leading a movement that kicked Shell off their land, the roses demonstrate the resistance that continues in these communities. It’s not too late to stop Shell drilling in the Arctic and leaving a toxic legacy like they have in the Niger Delta and Canadian tar sands [4].”
[1] http://www.no-tar-sands.org/2015/05/shell-fails-to-respond-to-questions-at-annual-general-meeting-about-environmental-and-climate-risks-associated-with-arctic-drilling-and-tar-sands/
[2] http://www.theguardian.com/business/2015/may/16/paddle-in-seattle-shell-arctic-oil-drilling
[3] http://www.theguardian.com/business/2015/may/19/climate-change-shell-annual-meeting-oil-global-warming-resolution-shareholders
[4] http://platformlondon.org/oil-the-arts/asw/
Faith Gemmill-Fredson (Neets’aii Gwich’in, Pit River and Wintu) of Arctic Village, Alaska is the founder and current Executive Director of REDOIL (Resisting Environmental Destruction On Indigenous Lands) REDOIL is a grassroots network that was created by Alaska Natives to share knowledge, experience and strategies to address the detrimental impacts of fossil fuel, mining and climate change in Alaska. Faith is a board member of the International Indian Treaty Council (IITC) Faith also currently serves as the Vice-President of the California Indian Environmental Alliance.
Mae R. Hank, Inupiat from Point Hope (AKA – Tikigaq), Alaska. Mae is a resident and tribal member of Native Village of Point Hope. Mae previously served as a Native Village of Point Hope Tribal Council member for ten years. Mae is a former employee of the North Slope Borough, and the City of Point Hope, as well as the former Executive Director of the Native Village of Point Hope Tribal Council office. Among her many accomplishments, she also served on the Point Hope Search and Rescue committee. Mae is a mother, and most importantly a grandmother of 17 grandchildren. Mae has been an active and vocal advocate in opposition to offshore development for 38 years. Her primary desire is to ensure the rights of the Inupiat to continue to live their traditional way of life by securing a clean and pure ocean so that the Inupiat whaling culture can continue to thrive in the Arctic. Threats now imposed upon the Inupiat people by Royal Dutch Shell and other multi-national oil companies’ efforts to drill in the Beaufort and Chukchi Seas of the Arctic Ocean. This is a direct threat to the Inupiat and their rights to continue to live their traditional whaling culture which the Iñupiat have done for thousands of years.
- See more at: http://platformlondon.org/p-pressreleases/shell-no-paddle-to-seattle-indigenous-activists-reach-westminster-shell-investor-meeting/#sthash.ShVrynlm.dpuf

Posted by Censored News, publisher Brenda Norrell at May 23, 2015