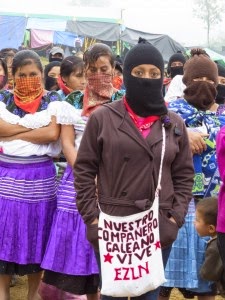 Good evening compañeros and compañeras of the Sixth.
Good evening brothers and sisters.
Good evening to everyone in general.
The topic that I will be explaining to you, actually I will read it to you, is the same topic the other compañera presented on, but with more information about the youth, both Zapatistas and non-Zapatistas.
We as Zapatista youth are facing a low intensity war that the bad government and the bad capitalists wage against us. They put ideas into our heads about modern life, like cellphones, clothes, and shoes; they put these bad ideas into our heads through TV, through soap operas, soccer games, and commercials, so that we as youth will be distracted and not think about how to organize our struggle.
But we Zapatista youth have not often fallen for this, because despite these attempts when we do buy clothes they are not the stylish ones; we buy the kind of clothes the poor wear, which as you can see is how we are dressed right now. We also buy shoes, but they are just a whatever kind of shoe, like the poor use; we don’t buy the kind with the pointy heels. If we were to use that kind of shoe, well where we live there is a lot of mud, and if we young women wear these shoes we’re going to get stuck, and we’re going to have to use our hand to get the shoe out. We also don’t buy those leather boots because the same thing can happen, they can come unglued in the mud because they are not strong enough; yes, of course we buy boots, but they are work boots, the kind that resist the mud, we don’t buy shoes that don’t resist.
And we also buy cellphones, but we know how to use them like Zapatistas, for something useful. We also have TV, but we use it to listen to the news, not to distract ourselves.
We did buy these things, but first we had to sweat and work the mother earth to be able to buy what we wanted.
On the other hand, youth who are not Zapatistas are those who most often fall for the tricks of the bad government, because believe it or not, those poor-poor youth abandon their families, their community, and they go to work in the United States, to Playa del Carmen, or to other countries, just to be able to buy that cellphone, that pair of pants, shirt, or stylish shoe. They leave because they don’t want to work the earth, because they are lazy. Why do we say they are poor-poor? Because they are poor like us; but they are also poor thinkers because they leave their communities and when they come back they bring bad ideas with them, other ways of living. They come back with ideas to assault or rob others, to consume and plant marijuana; and when they get back to their houses they say they do not want to work with the machete because they’re no longer used to it; that it would be better to go back again to where they were, that they no longer want to drink pozol,ii they say they don’t even know what pozol is anymore, even though they grew up with pozol, with beans. They pretend, in those places where they go, that they aren’t familiar with the food of the poor; they pretend to be children of rich folk, but this is a lie; they are poor like us.
On the other hand, we Zapatistas are poor, but rich in thinking. Why? Because even though we have shoes and clothes and cellphones, we don’t change our thinking or our way of life, because to us as Zapatista youth it doesn’t matter to us how we are dressed, or what kinds of things we have. What’s important to us is that the work we do is for the good of the community. That is what we Zapatistas want, and it’s what we want for the whole world: that there not be rulers, that there not be exploiters, that we as indigenous people are not exploited.
I’m not sure if you understood what I read.
Well, that was all the words I wanted to share with you, hopefully they are useful to you.
i The Zapatistas use the Spanish “Escucha,” meaning listener, to refer to an assigned position or responsibility, often given to young people, to go and listen at a meeting, gathering, or event and report back to others in the Zapatista communities who were not in attendance.
ii A drink made from ground maize mixed with water and often consumed in the Mexican countryside as a midmorning or midday meal