Indigenous resistance accelerates, regardless of media collapse in Indian country 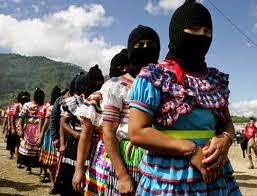 Indigenous resistance accelerates, regardless of media collapse in Indian country

While the US government was spinning lies before the UN Human Rights Council, the Obama administration was approving drilling in the Arctic. While paid stay-at-home plagiarizers dominate the news industry, Indigenous Peoples on the frontlines are telling their own stories, writing their own breaking news.
By Brenda Norrell
With the collapse of the news media in Indian country, more news than ever is being censored. When the casino industry seized control of the online national news in Indian country, reporters were replaced with stay-at-home plagiarizers and re-writers. Now, along with the plagiarism comes the distraction of fluff.
Without news reporters present serving as watchdogs, human rights violations soar for Indigenous Peoples.
While Dineh (Navajos) fight fracking, dirty coal, uranium mining and destruction of sacred places, Native Americans battle just-approved drilling in the Arctic, as the US carries out crimes against humanity at the US borders.
The Zapatistas have just completed a gathering examining capitalism, and organizing resistance. The powerful voices include Comandanta Miriam speaking out on the rights of women.
Speaking of the bosses before the Zapatistas rose in resistance, Miriam said, the bosses “had us as if they were our owners; they sent us to do all the work on the haciendas, without caring if we had children, husbands, or if we were sick. They never asked if we were sick; if we didn’t make it to work, they sent their servant or slave to leave the corn in front of the kitchen so that we would make tortillas for them.”
At the Arizona border south of Tucson, the annual Migrant Trail Walk begins May 25, 2015. This walk comes just after the United States lied, and concealed the facts, before the UN Human Rights Council in Geneva, about the imprisonment of migrant children, which is a violation of international law.
Further, during the Universal Periodic Review, Mexico challenged the US to account for the murders of its citizens by US Border Patrol agents. The abuse of migrants, including Indigenous Peoples, has been fueled by the racist media and racist politicians in the US, while corporations including GEO and CCA have profited from the mass imprisonment of migrants, including women and children. The death toll continues on the US border, including on the Tohono O'odham Nation, where laws restrict offering a glass of water to a dying migrant.
The walkers said, “Since the 1990s, more than 6,000 men, women and children have lost their lives crossing the U.S.-Mexico border, a direct result of flawed U.S. border and immigration policies that have intentionally diverted migration into more isolated and desolate terrain.  As the summer approaches, and Arizona temperatures enter the searing triple-digits, the number of migrants who will perish from dehydration and exposure dramatically increases. Participants of the Migrant Trail undertake this yearly trek to demand a stop to these preventable deaths.”
C

urrently, a delegation of female indigenous activists are making their voices heard at the Shell Annual General Meeting in the Hague, calling for an end to Arctic offshore development. Mae Hank and Faith Gemmill-Fredson were part of a mass “flotilla” action in Seattle on Saturday which saw hundreds of people take action next to Shell’s Polar Pioneer drilling rig, docked at the Port of Seattle’s Terminal.
While the US government's delegation was deceiving the UN Human Rights Council with lies and public relations spin in Geneva in May 11, the Obama administration was approving drilling in the Arctic.
Mae Hank said, “Our culture and livelihood is dependent on the bowhead, the walrus, the seal and the fish. How can Shell go ahead with such a risky operation when peoples lives are at stake?” Shell has a 75% chance of a spill in the region if it moves forward with drilling. Shell simply cannot be trusted with such operations.”
The delegation is being hosted by UK Tar Sands Network who will also attend the meeting to call for Shell to permanently pull out of the tar sands, despite putting major projects on hold.
“Shell is playing risk with the global climate by keeping tar sands projects on ice,” said Suzanne Dhaliwal director of the UK Tar Sands Network [3] “Shell insists that it can take leadership on climate change while committing the global community to a ticking climate bomb, with projects such as the Alberta tar sands. We need to immediately transition away from highly polluting energy sources towards a low carbon economy and not play dice with the climate.”
Meanwhile, in New Mexico, Dineh (Navajos) have joined others to halt fracking in the region of one of his country’s most important historical places, holding powerful keys to the past.
Moving to defend culture, climate, and communities, a coalition today moved to put a stop to new fracking approvals in the Greater Chaco Region of northwestern New Mexico, Dineh and others said in a statement.
Citing threats to public health, clean air and water, and Navajo communities in the region, the coalition called on a federal judge to issue an injunction on oil and gas development in the Greater Chaco region in light of the Bureau of Land Management’s illegal approval of hundreds of drilling permits.
"We need to put a stop to fracking in the Greater Chaco region because it impacts the living peoples, the water, air, wildlife, medicinal plants, and offering points," said Sarah Jane White of Diné Citizens Against Ruining Our Environment. "There are already reports of contaminated water from fracking activities and some people have to buy bottled water. Elders have been forced to sign oil and gas leases and this is an environmental justice issue! BLM needs to seriously consider all these impacts before approving any more oil and gas leases."
The Greater Chaco region is home to many Navajo communities living amid extensive oil and gas development that threatens their way of life. The area is also home to Chaco Culture National Historical Park, extensive ancestral Puebloan ruins and is considered the cultural heart of the American Southwest. Over the last two years, the Bureau of Land Management has approved more than 240 new fracking proposals, primarily near the community of Lybrook and within 20 miles of Chaco Canyon.  This is despite the agency’s acknowledgment that it has never analyzed how this development will impact public health and the environment, and has no plan in place to protect the region’s air, water and communities.
"For the Bureau of Land Management to continue to allow fracking in an such a sensitive area with no analysis of its effects will irreparably harm the people who live there, unique cultural resources and the climate" said Kyle Tisdel, climate and energy program director at the Western Environmental Law Center. "The fracking permits already approved are unlawful, and issuing new fracking permits without any information on the effects is unconscionable."
T 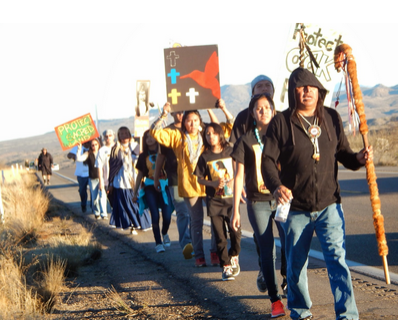 he crimes against humanity being carried out by the United States, including torture and the imprisonment of migrant children, are made possible by the duplicity of the media in the United States, including the well-funded online news media in Indian country, which no longer has  reporters actually out covering the news.
Arizona Sen. John McCain was able to seize sacred Apache land in Arizona for a copper mine. Few, if any, national news reporters, even noticed as he lobbied for this in the defense bill.
Since its passage, Apaches remain at Oak Flat in resistance.
(Photo credit Sandra Rambler, San Carlos Apache: Apaches March to Oak Flat)
Read more on these actions at www.bsnorrell.blogspot.com

For permission to repost this article, brendanorrell@gmail.com
Posted by Censored News, publisher Brenda Norrell at May 23, 2015