Inupiat Mae Hank Takes on Shell Board in the Netherlands 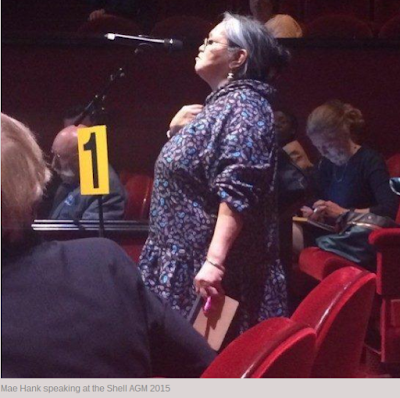 From the Annual General Meeting of Shell in the Netherlands

James at Platform London reports that Mae Hank and Faith Gemmill of REDOIL, with the assistance of Suzanne Dhaliwal of UK Tar Sands Network, came from Alaska to speak directly to the Board of their fears of the impacts of Shell’s plans on the livelihoods of their communities.

Mae from Point Hope, on the shores of the Chukchi Sea, addresses the Board in her own Inupiat language. After a few words of greeting, she slips into English: “I came here two years ago to ask the question I ask again today. How will Shell compensate us for any spill that kills our food? How will they compensate 50 generations, to keep them going through the winter? You are coming into our ocean, which provides our food security annually. We rely on the ocean for our food. I am a grandmother with 17 grandkids. My grandchildren are so afraid right now that with a 75% chance of an oil spill, they will never be able to eat our traditional food again.”

Many in the community of Point Hope are hunters. They have the most intimate understanding of the Bowheads that pass through the seas of their Arctic home. Using knowledge acquired over generations, they kill a number of whales each year and augment their diet with the meat. Like the communities that net food in the creeks of the Niger Delta, Mae’s is a culture that is built on the feast of fish. Unlike the cities of the North Sea shore which have long since decimated the Herring, Sturgeon, Salmon and whales of their bioregions, the Bowheads remain at the centre of Inupiat culture because the are hunted with skill, care and long-term thinking. Any spill from Shell’s drilling programme and planned oil production, would threaten the Bowheads, and theaten the Inupiat culture of the Chukchi. Now the people of Point Hope live with what Van Beurden calls “the biggest insecurity of not knowing what is coming next”.

Read full article:
Stranding the Leviathan – a report from the Shell AGM in Den Haag, Netherlands - See more at: http://platformlondon.org/2015/05/22/stranding-the-leviathan-a-report-from-the-shell-agm-in-den-haag-netherlands/#sthash.epQCy3aN.dpuf
Posted by Censored News, publisher Brenda Norrell at May 23, 2015