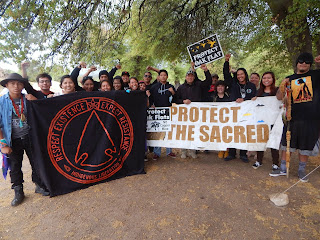 On May 4, Apache youth are joined by other youth from Indigenous Peoples including Oklahoma, Canada, New Mexico, California and others while occupying Chi'Chil'Bilda'Gotee (Oak Flat) in southeastern Arizona, on holy ancestral Apache land where the San Carlos Apache Tribal Council recently reaffirmed their opposed position against the construction of a $64 billion dollar mine by Rio Tinto/BHP/Resolution Copper Company on land deem holy and sacred to the Apaches and Indigenous Peoples since time immemorial.  Various groups from the Navajo Nation were also present while advocating for preservation of sacred sites and respecting Moother Earth.  Meanwhile, Resolution Copper Company has hired two Apache youth, Tara Kitcheyan and Michael Betom to work against their own San Carlos Apache Tribe using the old English tactic, "Divide and Conquer," strategy and have not gained much support from community members.

Posted by Censored News, publisher Brenda Norrell at May 04, 2015