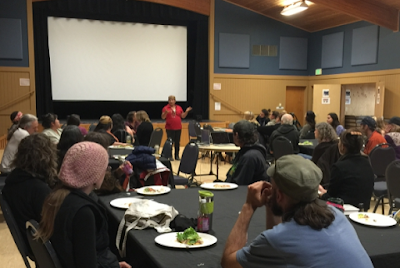 The speakers explained to a crowd of 40 people that Northwestern California water from the Trinity River and Shasta reservoirs are shipped hundreds of miles to benefit California’s agriculture industry, which continues to use 80 percent of California’s water on water intensive crops during the record drought.

“Even though average Californians are being asked to cut their water use, corporate agriculture interests are expanding their acreage in the driest areas of California,” said Chichizola, "and they are planning to destroy Northern California’s rivers and flood sacred sites to keep up their unsustainable water.”

Chichizola noted that almond acreage alone has gone up over 150,000 acres since the drought began, yet Governor Jerry Brown on May 6 told environmentalists to "Shut Up" in response to criticism over his twin tunnel plans. (http://www.indybay.org/newsitems/2015/05/06/18771989.php)

The film night focused on impacts to Northern California’s rivers from water diversions and how politicians and corporate agribusiness interests are using the drought to push through new harmful water policy and projects, such as the Bay Delta Conservation Plan (BDCP), the Shasta dam raise, and drought legislation, while allowing the state’s aquifers to be drained.

Native American speakers highlighted how the proposed Shasta dam raise, which threatens over 40 actively used sacred sites of the Winnemem Wintu Tribe, and how the continued water exports to the Central Valley threaten the Trinity and Klamath River salmon and Tribes. They also shared efforts by Tribal activists and other river and salmon activists to stop what they called the "biggest planned water heist in decades."

Chief Caleen Sisk said the water bond, peripheral tunnels, Shasta Dam raise and other water projects now being planned by the state and federal governments are in in reality "one Big Project" that will destroy salmon, rivers and groundwater supplies.

“It does not make sense that people are separating the water puzzle into individual pieces, such as: the raising of Shasta Dam, Proposition 1, the Delta tunnels, BDCP, Sites Reservoir, Temperance Flat, CALFED, Delta Vision, BDCP, OCAP, the Bay Delta, Trinity/Klamath Rivers, the Sacramento River, the San Joaquin River, and water rights," said Chief Sisk. "It is all one BIG Project."

She emphasized, "These are not separate projects; they are all the same thing that the State is asking us to fund - California water being manipulated for the enrichment of some and the devastation of cultures, environments, and species all in the name of higher profits.”

On May 6, Governor Brown told the crowd at the Association of California Water Agencies (ACWA) Conference, “I asked my water man sitting over there how many man and woman hours have gone into the Delta Project? Would you tell them? One million!"

"Until you've put a million hours into it, Shut Up!" said Brown, referring to critics of his tunnels and Delta policies.

"If people want to survive, they can't trust the Governor and staff, who have only spent a million hours on this project," Chief Sisk said. "The Delta has been dying since they've been doing what they've been doing - and they don't even know that it's dying."