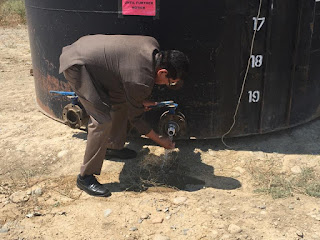 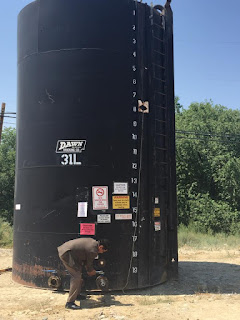 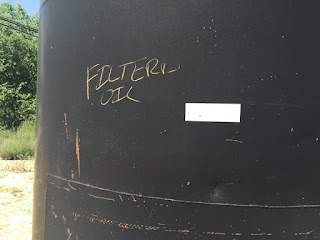 SHIPROCK, N.M. -- The US EPA sent Navajos poisoned water after the massive Animas gold mine spill, which the EPA was responsible for.
Further, Navajos say EPA officials have not only denied the water in the tanks was tainted, but have accused Navajos of being mentally unstable who exposed the contaminated water. Listen to the video statements: https://www.facebook.com/pages/Navajo-Nation-OPVP-Russell-Begaye-And-Jonathan-Nez/302132179938953
The Gold King mine spill flowed from the Animas River into the San Juan River, which Navajo farmers are dependent on for irrigation. The San Juan River is also used for livestock and Navajo families swim in the river.
After the spill flooded the rivers with heavy metals, the EPA then sent water in tanks contaminated with oil.

In Shiprock on Monday, Duane 'Chili' Yazzie said,  "Disaster upon catastrophe in Shiprock. The water transport company that was hired by EPA to haul water from the non-contaminated San Juan River set up 11 large 16,000 gallon tanks throughout the farming areas in Shiprock and filled them up with water for the crops. As they started to take water from the tanks for their corn and melons, the farmers noticed the water from some of tanks was rust colored, smelled of petroleum and slick with oil. The hopes of the farmers of actually being able to save some of the precious crops were obliterated in an instant with the tainted water. The farmers refused to use the water."
"EPA and SSS Trucking were told to take the water and dump it off Rez, to load up the tanks and get off the Rez. Stands to reason, the water transport company was SSS Trucking of Farmington, one of the trucking companies that supply the dreaded fracking operations with 600+ nasty chemicals and millions of gallons of water. Now the Chapter, the Navajo Nation and BIA are scrambling to secure other sources for water. Crops are getting thirsty, it is reaching critical stage. Pray for rain."

Navajo President Russell Begaye and the Navajo Nation Attorney General Branch are personally investigating concerns about tainted water in EPA tanks, Begaye said in a statement.
"The President and the Attorney General are extremely troubled by these reports and are working to gather all the facts and will discuss their findings with senior EPA officials and the Navajo Nation as soon as we updated information."
Marisa Demarco at KUNM radio in Albuquerque reported Monday that Navajo farmers had been sent contaminated water by the US EPA.
KUNM reports:
"Farmers in Shiprock say the tankers arriving with desperately needed hydration for their crops contained water that smelled like petroleum, was visibly discolored and had an odd sheen to it.
“The barrels are not clean,” said Farm Board Representative Joe Ben Jr. “They are from oil drilling operations.”
The deliveries were intended to help crops that are wilting in the sun after the spill at the Gold King Mine in Colorado on Aug. 5 contaminated the San Juan River downstream. Ben halted the distribution of the emergency replacement water. “The EPA has begun to study this water,” he said. “In the meantime, our plants are dying.”
EPA testing results for the San Juan River were not released until 10 days after the spill.
The farmers are outraged, Ben said, and they have yet to receive one clean gallon from the EPA, which took responsibility for the Animas River spill. “I am at the point where I just don’t understand this situation no longer,” he said. “There are no resources extended to us.”
There are about 450 farmers in the Shiprock area, which is the agricultural hub of the Navajo Nation. “This is a national resource—a treasure,” Ben said.
More on the story at KUNM:
http://kunm.org/post/navajo-farmers-epa-sent-us-more-contaminated-water#stream/0

For permission to repost this article brendanorrell@gmail.com
at August 20, 2015