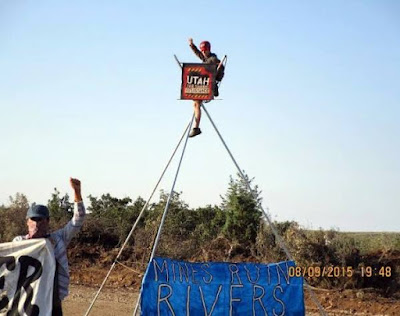 BOOK CLIFFS OF UTAH -- Land defenders strike back against mining industry for Colorado River poisoning.
Several dozen climate justice land defenders will enforce a shut down at the US Oil Sands tar sands mine today in the Book Cliffs of Utah. The action comes just days after a century-old mine poured millions of gallons of toxic sludge into waterways that sustain 40 million Americans.
“Thousands of mines like open wounds tell the story of a century of exploitation, destruction and violence–against the people of this land and the land and water themselves,” said Melanie Martin of Peaceful Uprising, on behalf of the crowd. “US Oil Sands continues that sick tradition by squandering precious water in a thirsty region and saddling future generations with a toxic legacy there is no way to clean up.”
For live updates and more pictures of this ongoing blockade, check out Peaceful Uprising and their website:
http://www.peacefuluprising.org/ACA2015