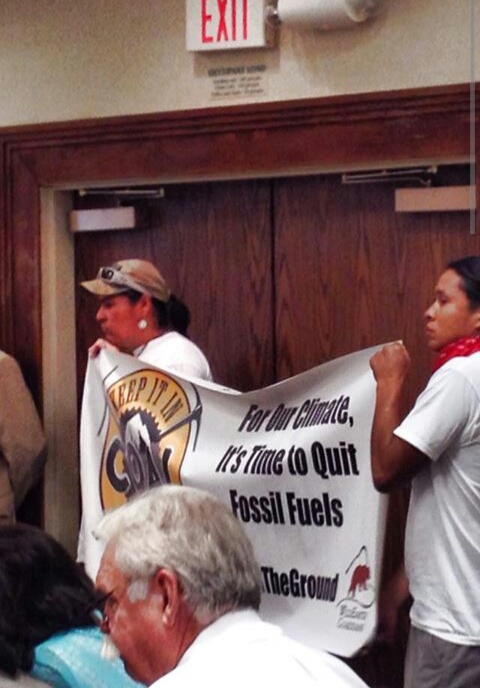 Navajos and Pueblos were among those demanding a halt to the dirty coal energy and uranium mining that has left a trail of death and disease in the Four Corners region
By Brenda Norrell
(c)Censored News
English with French translation
Photo credit Dine' CARE: BLM objected to the banner: "For Our Climate, It's Time to Quit Fossil Fuels, Keep It In the Ground"
FARMINGTON, N.M. -- Speaking out against the laws that target Native Americans and their natural resources, Native Americans told the Bureau of Land Management to make the change to renewable energy and halt the ongoing genocide of Native Americans for dirty coal energy.
Native Americans, scientists, farmers and laborers described the reality of disease and death in the Four Corners sacrifice region, during a BLM listening session. 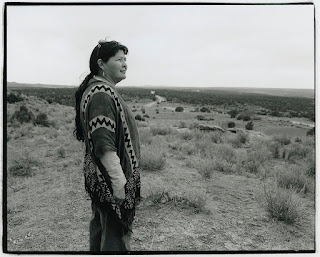 Louise Benally, Dine' of Big Mountain resisting forced relocation, testified that she is a victim of the destruction of coal mining by Peabody Coal on Black Mesa, where the forced relocation of Dine' (Navajos) has been carried out to clear the way for Peabody Coal mining.
Benally said right now sheep and livestock are being impounded on Black Mesa.
Benally said Arizona Sen. John McCain continues his attempts to steal Colorado River water rights for those who live in luxury in southern Arizona and for the coal-fired Navajo Generating Station in Page, Arizona, which provides electricity for southern Arizona.
"The utility companies eat the earth, suck out her breath."
Describing how the coal companies destroy the earth, she said, "We're sick and tired of your greed."
Benally said the US continues killing the people through its laws.
"The Arctic drilling needs to stop," Benally said, pointing out Obama's decision to grant Shell the right to drill in the Arctic.
"The Alberta pipeline needs to stop," Benally said of the Alberta oil tarsands and its pipelines, including the Keystone XL.
She said India and China need renewable forms of energy instead of continuing the demand for these dirty forms of energy.
"Do your job make that change," Benally told the BLM.
Louise Benally and Lester Begay, Dine', both brought the message: "Leave it in the ground!"
Lester Begay testified that the Dine' elders knew, and foretold, that what was taken out of the ground would kill the people.
Begay said the elders taught Dine' to respect what is in nature. He shared the elders story: When white people pick up a rock, they will look at it all day, then they will sell it.
Native Americans testified that asthma and heart attacks are caused each year by the Four Corners and San Juan power plants alone in New Mexico.
Four Corners power plants mean the region has become a sacrifice zone, producing dirty coal fired electricity for distant cities.
Pueblos testified that the Jackpile Mine uranium mine caused death in the Laguna and Acoma Pueblos in New Mexico. Pueblo miners went to the mines unprotected from the radiation, and the radiactive dust spread over their water, food and livestock grazing areas.
"Our very way of life was stolen," said one Pueblo woman who spoke of her grandfather's death.
"They were not made to clean up the damage that they had done." She added that no amount of money could bring back her grandfather.
A member of the Dine' medicine peoples association said, "You have to be careful how you distract Mother Earth."
"We have to respect Mother Earth," she said, describing the poisons from the power plants.
One person testifying for Indigenous and people of color said that the Four Corners residents who came to testify were disrespected by the BLM officials, during their prayer outside earlier. Further, she said they were not greeted properly by the BLM.
Native Americans living in the Four Corners regions said children are among the ones who are suffering from asthma and respiratory diseases from the coal-fired power plants.
The San Juan Generating Station and Four Corners power plants use huge amounts of clean drinking water and release toxic water, residents testified.
Coal-mining targets the poor and most vulnerable, residents said.
One of those residents, who lives downstream from the Four Corners power plants, said his five year old son nearly died from the downstream power plant pollution. He told the BLM officials to go down there and drink the dirty water coming out of Four Corners power plants. He said they expect his family and children to drink it, so they should go drink it.
"There is no such thing as clean coal," one Four Corners resident said.
The United States was told to stop subsidizing dirty coal energy.
Charles Pacheco described working in power plants, hazardous waste and radiation.
Pacheco said the Obama administration would not comply with regulations regarding safe respirators and arsenic at San Juan Generating Station.
When Pacheco complained, he was terminated.
“If you were a laborer and said anything about it, they laid you off."
Donna House, Dine', described how the power plants have destroyed rare and endangered plant species. The power plants have destroyed habitat for plant species and people, House said.
Farmers said they need clean water for their crops. New Mexico has a rich culture and the people will not stop fighting dirty coal, one farmer said.
The BLM was also criticized for failing to announce this session in other languages, in the state of New Mexico, which is multi-lingual.
"We want system change, not climate change," one resident testified.
A high school student from Santa Fe testified that dirty coal electricity is the number one contributor to global warming.
It was also pointed out that last year was the hottest year on record, and there are wild fires raging now in the west.
Peabody Coal and other dirty coal companies are going bankrupt and taxpayers will be left with the cost of this dirty energy that has caused widespread death and disease, residents testified.
Those testifying about climate change and destructive US coal energy policies included Dine', Pueblo, students, scientists, farmers, laborers, sheep herders, filmmakers, and community members from Big Mountain to Taos Valley and Colorado, Santa Fe, Albuquerque, and beyond.

Sanders Navajos now victims of 1979 Church Rock radioactive spill
In related news from the area, Navajos in Sanders, Arizona, are now the victims of the Church Rock uranium spill which happened in 1979 in nearby New Mexico. The radiation has traveled down the Rio Puerco wash, making the water unsafe to drink and resulting in high cancer rates in the area.
Among those who are the victims are Navajos relocated to the Sanders area from Black Mesa, which was carried out to clear Black Mesa for Peabody's coal mining.
The US government knew when it created Nahata Dzii Chapter, and relocated Navajos from Black Mesa there, tht the radioactive water from the Church Rock spill would contaminate the water supply there.
Tonya Baloo, in a press statement said:
Following a systematic sampling of over 114 well sites in Nahata Dziil Chapter and neighboring region, at least 8 well sampling results yielded the presence of elevated levels of uranium in the town of Sanders, AZ. Members of Tó lání Lake Enterprises, the Little Colorado River Watershed Chapters Association, and Southwest Research and Information Center conducted the sampling project. Results of the study, titled the Puerco-LCR Water Quality Environmental Justice Project, were presented to community members on July 24, 2015 at the Nahata Dziil Chapter House. Since then, many of the approximately 300 residents of Park Estates in Sanders, AZ have been cautioned to stop using the contaminated water for drinking, bathing, cooking, and cleaning. Read more: http://bsnorrell.blogspot.com/2015/08/navajos-in-sanders-victims-of-uranium.html 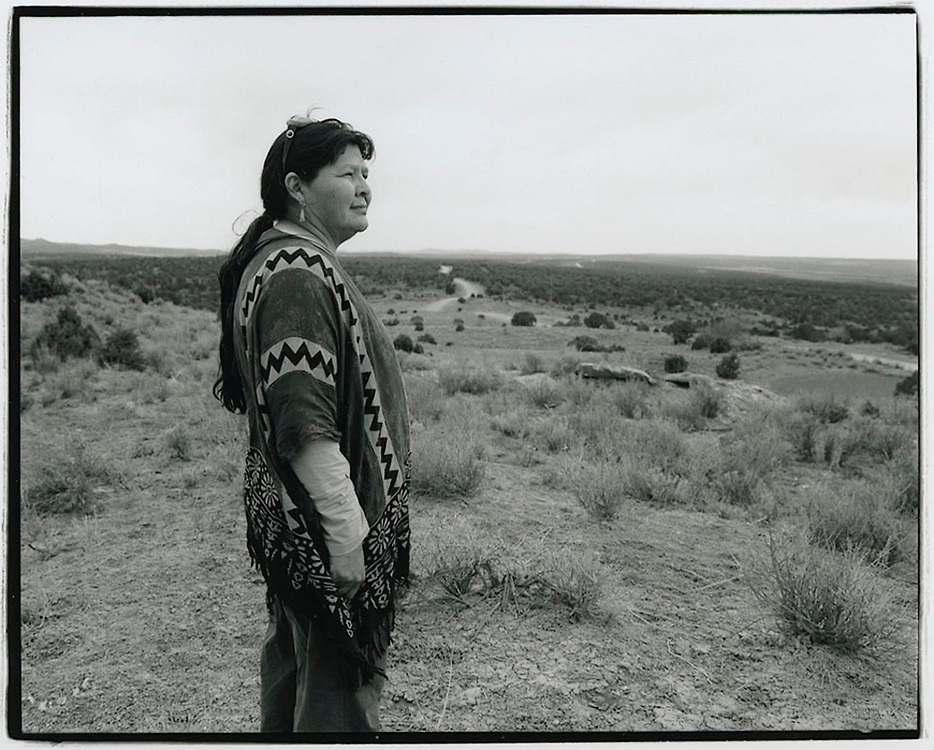 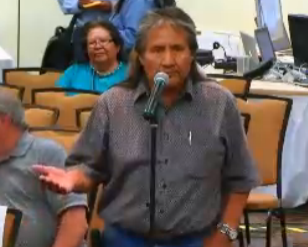 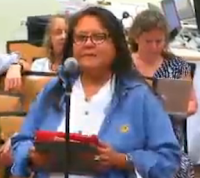 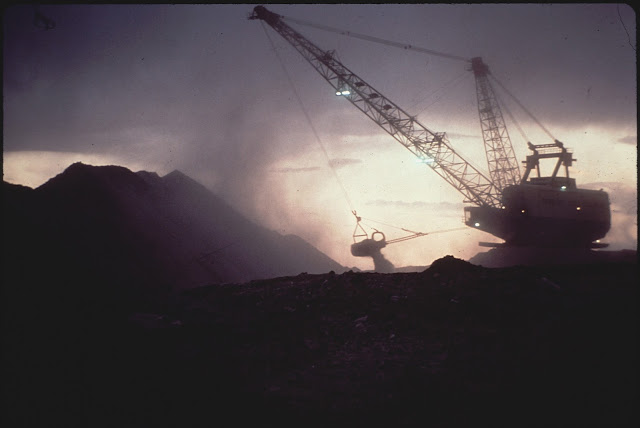 For permission to republish this article: brendanorrell@gmail.com
Posted by Censored News, publisher Brenda Norrell at August 21, 2015