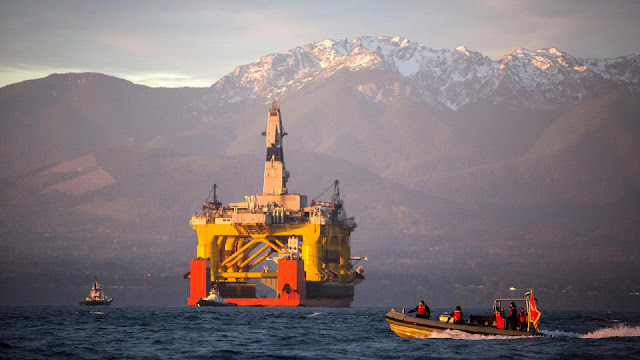 President Obama has been a master of public relations spin -- using small gestures to create a favorable image on human rights and the environment. Then on the issues that mattered the most, Obama delivered the devastating impact: assassinations with drones, Guantanamo, prosecution of whistleblowers, and now drilling in the Arctic.
On the same day he announced approval of Arctic drilling in May, his US delegation, including Keith Harper, Cherokee, was spinning coverups before the UN Human Rights Council in Geneva.
The US torture protesters in Tucson explained this strategy, which Obama uses, to me best during a discussion of NPR (National Public Radio.)
"Basically they suck you in on the small issues, then hit you with their real agenda."

In the news: Obama's final approval for Arctic drilling before his Alaska visit
https://www.bostonherald.com/news_opinion/national/2015/08/approval_of_arctic_drilling_comes_just_before_obamas_visit

Beluga whales live in the Arctic waters where Obama has approved Shell's drilling. Maybe Obama can invite students to the White House to learn about these gentle Beluga whales that he is now endangering. They could create backpacks for the kids with Beluga whale decals on them. That's how they spin truth at the White House.