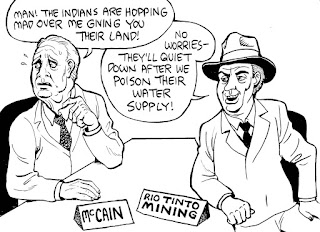 Join us to protest John McCain's giveaway of Oak Flat to Rio Tinto this Thursday!

What: Shame On McCain Protest

Where: 88 E. Broadway Blvd, in front of TEP Headquarters where one of three "private town halls" will take place.

Senator John McCain has so much to be ashamed of: giving away sacred Apache Land at Oak Flat, sponsoring Senate Bill 750 which waives ALL LAWs and gives Border Patrol unlimited authority to wreak havoc on public and tribal lands for 100 miles north of the US/MX border, refusing to meet with constituents who disagree with him, and holding "private town halls" where the public is locked out and big industry is invited in.

Words fail. This is completely outrageous. Wish I could go to Washington.

McCain or Mcshame should be taken off of the Senate Indian Affairs Committee ASAP Do to his direct conflict of interest!

So true. And the sad part is so many people don't even know that Sen. McCain is on the Senate Committee on Indian Affairs, largely due to the fact that there are no Indian country reporters in DC anymore covering these vital issues. The national Native media websites rely on plagiarism, rewrites and copy and paste. There are no Indian country reporters there, present in Congress or DC serving as watchdogs. The land and water thieves like McCain are free to carry out their crimes.