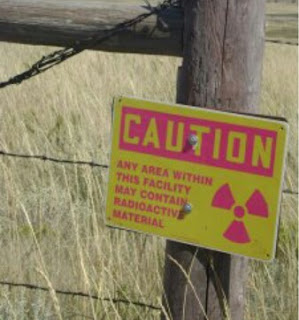 
Crawford, Nebraska-
The Nuclear Regulatory Commission Atomic Safety and Licensing Board will hold a hearing Aug. 24-28th 2015 in Crawford, Nebraska on challenges to the license renewal for Cameco's Crow Butte uranium recovery facility near Crawford. The board is the independent body within the NRC that conducts adjudicatory hearings and renders decisions on legal challenges to licensing actions.
After a ten-year battle to stop the uranium mine from renewing and expanding it's operations, experts and lawyers representing local residents, Native Americans, the Western Nebraska Resources Council and the Oglala Sioux Tribe will have their opportunity to testify in front of the Nuclear Regulatory Commission. The plaintiffs intervened in 2008 to stop the uranium mining permit renewal. Evidence presented will address contentions which challenge, among other things: the adequacy of the evaluation and protection of historical resources at the site, impact on Native sacred sites and the NRC's analysis of the facility's impacts on surface water, groundwater, and the ecosystem.

The board will hear arguments on four technical contentions and five related to the environmental review. The NRC renewed the facility license in 2014 in advance of the hearing, with an expiration date of Nov. 5, 2024.

Indeed, this environmental issue truly goes beyond the boundaries of race, county lines, townships, state borders -- it effects all of life in this area, and can reach far into the future generations of all living things: the two-legged, the four-legged, the winged, the standing silent nation (plants), those that crawl and swim, and our Sacred Water, Sacred Land, and Sacred Air. For the Lakota Oyate (Lakota People) a clean environment is a matter of life and death. To expose our people to the deadly toxins of uranium mining is a threat to our survival as a people… this is environmental racism.
Colleen Bennan, local resident and Sisterhood Water Watch co-founder says:
I was born in Dawes County, raised in rural Sioux County. Crawford is my hometown. I live in Chadron today, just 24 miles down the road. I still have family and friends there. I don't feel unsafe in my little town. I walk with intention, my head is up, my eyes and ears are open. I oppose this foreign company and its practices. I am not afraid. I welcome anyone to come spend time with open minds."
Members of the public and media are welcome to observe the evidentiary hearing, but testimony will be limited to the parties, lawyers and witnesses. Arrive at least 15 minutes early for security screening. Videotaping is not permitted inside, but plaintiffs, community members, local residents and others working to stop uranium mining in the region will be available for interviews outside.
Additional information follows.

FOR AN OVERVIEW OF THE REGION AND HUMAN STORIES BEHIND THE ISSUES VISIT:

-Debra White Plume is Executive Director of Owe Aku, a lead plaintiff in the hearing. Their website features information about their uranium work, a legal brief on the history of Water Regulations in the United States, federal government treaty obligations and other work done by this Lakota based Environmental and Human Justice organization. www.oweakuinternational.org

-CRYING EARTH RISE UP- This contemporary documentary film exposes the human cost of uranium mining and its impact on Great Plains drinking water.  The film website (www.cryingearthriseup.com) has a lot of information regarding the issues and stories. Director Suree Towfighnia is attending the hearing and hosting regional screenings during the week. She is helping coordinate media.

BULLET POINTS OF ITEMS THE HEARING WILL ADDRESS:

Contention A & C:
Regulations do not require off site water testing for uranium and other heavy metals associated with uranium ISL milling. Disinformation has caused the radioactive contamination to be normalized. A farming/ranching operation adjacent to Cameco Crow Butte Resources had to down crops due to air-born contamination from the mine, it is said there was a payout to cover the lost crop.

Contention F: Educational administrators have neglected Dawes county students and do not provide access to earth science classes that fully analyze local soils and water. Educators who want this kind of technical knowledge for students get ostracized and/or not even considered for employment within Panhandle classrooms.

Contention 1: Local leaderships who are Cameco proponents use institutionalized racism effectively to dismiss the Oglala Lakota Nation and individual members who are intervening in opposition of Cameco Crow Butte Resources uranium milling license permit. No formal consultation has been undertaken with the Indigenous Tribal Nations of the region. Furthermore, no formal consultation has been performed with the rural agricultural heritage descendants or agritourism businesses living in the area.

Regarding Contentions 12-14, Cameco CBR ISL has consistently failed to coordinate and react appropriately to industrial and/or rangeland wildfire occurrences off site and in surrounding environs. 75 violations and reportable incidents show a complete lack of due diligence for the safety of people, livestock and soils.

STATEMENT FROM LAWYER DAVID FRANKEL
I represent Consolidated Intervenors in the NRC Atomic Safety Licensing Board hearing coming this Monday Aug 24 to Friday Aug 28 - we have raised contentions that the mining in the faults and fractures is inimical to public health and safety in violation of the Atomic Energy Act and that the NRC and Crow Butte mine failed to respect native rights and failed to adequately identify and protect traditional cultural properties -
The 'cozy' relation between the NRC and mining company has allowed abuse of regulations, abuse of law, and a cover up of pollution by the mine despite consistent warnings from geologists going back to a 1989 Whistleblower letter which was ignored by NRC. NRC gave the mine a 7 year 'free pass' by delaying a decision on its 2007 license renewal until 2014 and then granting a full 10 year license till 2024; of course the mining company lawyer used to be a lawyer for the NRC Staff; all this despite there being 79 violations of the license and regulations by the mine in the past few years; many spills and a failure to restore the mined aquifers to baseline as well as failure by the mine to use recent geological research and failure to test for uranium in monitoring wells because they don't want to know.
Meanwhile, Dr. LaGarry (one of our experts) says that every time it rains contaminants are driven farther along The White River to Pine Ridge Indian Reservation where people show signs of poisoning by uranium, arsenic, radioactive lead and other outflows of the mine. All this is denied by the mine and the NRC looks the other way while vigorously defending against any improvements in analysis or disclosure and fighting to show they did the minimal needed to satisfy their regulations which are written to favor the mining industry.
It appears any fool who fills out the forms gets a license to mine uranium out of the aquifers that people would rather use for drinking, bathing, gardening, ranching and agriculture. The entire proceeding is a sham that only gives the appearance of public participation.
Foreign ownership challenges were denied because the NRC only looks to the shell company that operates the mine and not up the chain to the ultimate parent. NRC officials coach mine operators on how to fill out forms and jump through inspections so as to have the least amount of resistance and to ride rough shod over public and tribal concerns.
Hearing procedures are designed to minimize actual fact finding - pleading rules are much more stringent than federal court; no direct or cross examinations of witnesses are allowed and the lawyers are banned from making oral arguments or opening statements. The NRC employee judges are the ones who rule on the NRC staff decisions which are defended by NRC lawyers all for the benefit of the mining company. All proceedings are double teamed (NRC lawyers and mining lawyers) against public intervenors. Any failure to comply with the strict rules is resolved without mercy against the public.
The NRC is the most dangerous and corrupt federal agency only giving the appearance of caring about public safety and in the meantime - like the fox guarding the henhouse - NRC allows horrible pollution from uranium mines in the name of promoting mining and nuclear power. They completely lost sight of the Atomic Energy Act which requires that all licenses be issued only if not inimical to public health and safety and turn a blind eye to any possible problems to public health and safety -
Meanwhile, wells are ruined, people get sick and the environment is being destroyed. All this is so the mining company can make about $30 million in sales per year which is a pittance in the context of American business.
Feel free to email me at arm.legal@gmail.com for more details.
Sincerely,
David Frankel
Counsel for Consolidated Intervenors
In Re Crow Butte Resources, Crawford NE