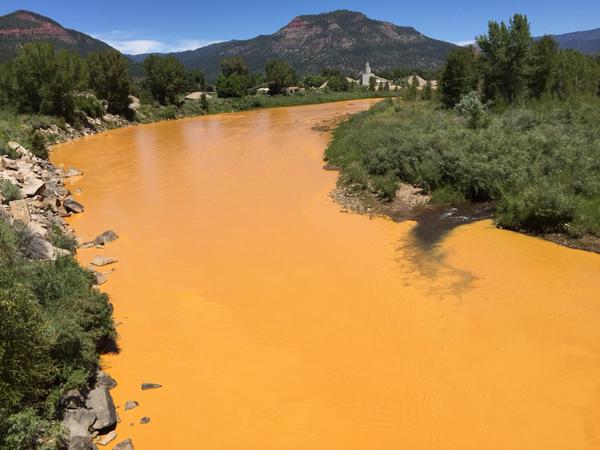 After poisoning the river water of Navajos and farmers, the United States immediately began a dirty tricks campaign to get Navajos to sign waivers of liability

The United States has poisoned the Four Corners river water, and immediately began a dirty tricks campaign, attempting to have Navajos sign 'waivers of liability.'
When the power plants first poisoned the air, water and land of the Four Corners region, the United States declared the Four Corners region -- including this area of the Navajo Nation -- is a "sacrifice zone."
This is because the electricity produced here is for distant US cities. Power plants, and the dirty coal mining it depends on, use lots of water.
Now, with the poisoning of the Animas River by the US EPA, with water from the Gold King mine -- whether it was intentional or accidental by the US -- the US has once again carried out a scorched earth campaign.
The US EPA has poisoned the water of those with the least financial resources to recover and survive: Navajos and farmers in the Four Corners region who depend on this river for water, livestock and crops. The US EPA admits it is responsible for this spill.
At the same time, the US and Arizona Congressmen have been using every trick possible to get Navajo area river water for power plant use, including trying to secretly steal it, as was revealed in attempts to steal the nearby Colorado River water by the US Interior and Arizona Congressmen for the Navajo Generating Station at nearby Page, Arizona.
Now the US has poisoned the river water in the Four Corners region.
Not only has the US poisoned the Animas River water in this area of New Mexico and Colorado, but the US EPA immediately began a dirty tricks campaign, attempting to get Navajos to sign waivers of liability to release the US from financial liability, to prevent Navajos and others from recovering.
Already, the US has presented these forms to Navajos in Shiprock, N.M., and Aneth and Oljato in Utah, along the San Juan River, which is being poisoned from the heavy metals in the Animas River spill. These are remote areas where many Navajo elders still speak Dine' (Navajo.)
Navajo President Russell Begaye has warned the people not to sign these waivers of liability in this latest attempt by the US to continue genocide against Native Americans and America's poor.
Navajo President Russell Begaye said, "The U.S. EPA has been seeking signatures from the Navajo People on Standard Form No. 95 which, if signed, will waive future claims against the U.S. EPA.
"The Federal Government is asking our People to waive their future rights because they know without the waiver they will be paying millions to our People. This is simple; the Feds are protecting themselves at the expense of the Navajo people and it is outrageous," President Begaye said.
See President Begaye's statement and warning, with French and Dutch translations provided at Censored News
http://bsnorrell.blogspot.com/2015/08/us-epa-tells-navajo-people-to-waive.html

Wikipedia: A scorched earth policy is a military strategy that involves destroying anything that might be useful to the enemy while advancing through or withdrawing from an area. It is a military strategy where all of the assets that are used or can be used by the enemy are targeted, such as food sources, transportation, communications, industrial resources, and even the people in the area. The practice can be carried out by the military in enemy territory, or in its own home territory. It may overlap with, but is not the same as, punitive destruction of the enemy's resources, which is done for purely strategic/political reasons rather than strategic/operational reasons.

For permission to republish this article:  brendanorrell@gmail.com
at August 13, 2015

Chief Begaye: I, Amitoli-- address you personally, to stop leasing our sacred lands for mining and gas exploration. I ask you join Nations, Chiefs (Niinshch'il) & WAKE UP!!! Rise up in light of this BPA disaster on our Great Navajo Nation...to open the eyes of Native Nations collectively; for the first time in history - ALL NATIVE NATIONS MUST COLLECTIVELY FIGHT AGAINST MINING, LAND GRABBING AND DESTRUCTION OF OUR LANDS- there is power, if ALL NAYIONS Chiefs, JOIN TOGETHER - EVERY NATION I PRAY; do not allow our voices to me muted. I ask you address the viability of the Keystone Pipeline for America; when too much is at risk for all, NATIVE AND NON-NATIVE. One just has to look at the tar pit pools in Canada, related to the Athabasca River. It's no secret the indigenous peoples are suffering from tumors, cancers and early death in Canada. Their wells are contaminated and peoples wells overall are going dry for the Keystone Pipeline there - and, must still pay their mortgages. If the poisoning of our lands and watershed is the result, turning our sacred lands into a toxic wasteland for a dollar...This will rest on the Chiefs of all Native Nations...complacency is not an anwseer. Neither is taking a check (payoff) from the BPA, Mr. Begaye. Amitoli.