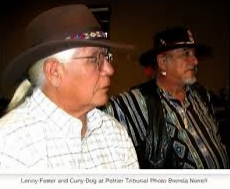 With a lifetime of experience from AIM and Wounded Knee, to battling for prisoners rights, Lenny Foster will speak in New York

Lenny Foster, Diné, director of the Navajo Nation Corrections Project, has been a voice for the otherwise forgotten Native American prisoners who battle for religious freedom while incarcerated.

Foster has served as the spiritual advisor for more than 2,000 Native American inmates in 96 state and federal prisons in the Western U.S. He has co-authored legislation in New Mexico, Arizona, Colorado and Utah, allowing Native American spiritual and religious practice in prisons, resulting in a significant reduction in prison returns.

Since 1969, Foster has been a member of the American Indian Movement. He has participated in many actions including the occupation of Wounded Knee in 1973. He has received many awards and honors, including the 1997 Petra Foundation Human Rights Award in Washington, DC, and a 2013 US Human Rights Movement Builders Award from the Atlanta-based US Human Rights Network. His program was awarded High Honors from Harvard University Honoring Nations 2003 Tribal Governance Excellence.

The Anarchist Book Fair brings publishers, designers, writers, artists, musicians and activists from all over North America to this historic location in Greenwich Village. Besides exhibits, the book fair will feature speakers, panels and workshops on a wide range of topics.

The event with Foster at the Riverside Church will open with Frank Menusan on Native flute. It is co-sponsored by the Riverside Church Prison Ministry, an organization of volunteers that conducts advocacy and outreach programs for those in prison, their families and their community, and NYC Free Peltier, dedicated to the freedom of wrongly-imprisoned Native American political prisoner, Leonard Peltier.
at March 19, 2015 No comments: