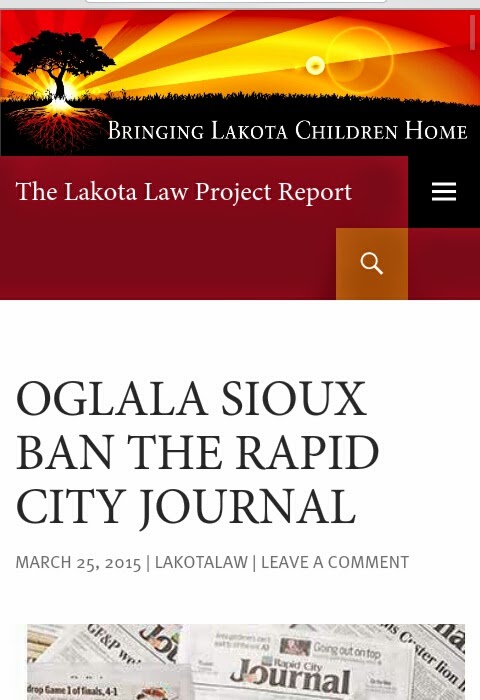 EL PASO: Silent March for the 43 Disappeared in Ayotzinapa 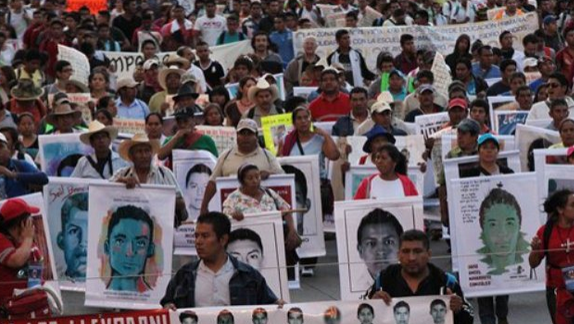 SILENT MARCH IN EL PASO, TEXAS
TO COMMEMORATE 6 MONTHS OF SILENCE IN AYOTZINAPA

​
La Red Binacional Por Ayotzinapa
Censored News
Dutch translation at NAIS
EL PASO, TEXAS - March 25, 2015 - Organizations in El Paso and Ciudad Juarez will commemorate the 6-months of silence since the disappearance of the 43 students kidnapped in Guerrero with a silent march. The march will take place on Thursday, March 26th at 6pm from the Mexican Consulate in El Paso to the intersection of El Paso & Sixth Street, at the mouth of Santa Fe international bridge. The media and the public are invited.
El Paso’s and Ciudad Juarez’s march is to honor the Sixth Global Day of Action for Ayotzinapa, one of which is held every month in cities all over the world, to commemorate the events of September 26, 2014 when police and gangsters killed six, wounded 25, and kidnapped 43 students of the Ayotzinapa Rural Teachers College. The parents have continued to demand that their children be returned to them “alive as they were when they were taken.”
El Paso and Ciudad Juarez will march in silence not to mourn the 43 missing students, for there is hope that they are still alive. The march is silent to represent the hurt and pain felt by the people of Mexico and the United States in the wake of the unjust and oppressive actions of the Mexican and United States governments since the disappearance of the 43 students. The cities, joined together by the tragedy of Ayotzinapa, have shouted for and demanded justice; since they have not been heard, this time, they will express their indignation with silence.
This action comes in the wake of a visit to El Paso by some of the parents and family members of victims and survivors of the events on September 26, 2014. They visited El Paso on March 16 & 17 to spread word of the injustices that happened at Ayotzinapa and to promote U.S. support of the parents and friends’ search for the 43 missing students. They will be visiting other U.S. cities in the coming month.
at March 25, 2015 1 comment:

Please post & distribute. Nia:wen.
MNN. 25 Mar. 2015. The US founding fathers went to Albany in 1754 to learn about confederation and union from us. This became known as the “Albany Plan of Union”. The British overlords shot it down because of the power of its Council of Women and Council of Men. The British owned their women and did not want them to know about this.

Yep! This is democracy.
The American Revolution was initiated to divide and conquer the Iroquois Confederacy, to chop down the Tree of Peace, that stood for 3,000 years in Onondaga, the biggest tree in Onon’ware:geh. In 1779 over 13,800 colonists were sent to chop it down.
A pretend democracy was created based on the structure of the Great Peace. The Senate replaced the Council of Women. Congress replaced the Council of Men. The President, a hierarchical overlord, was placed over the whole process to render it moot.
Next the 51% majority rule was implemented, which is totally opposite to the consensual decision making process of the Great Peace. Then the bankers were put in place to control all transactions. They started selling the fantasy that people could “own” Ongwe’hon:weh land. The colonial settlerism problem began, we deal with today.
All decision-making in the Great Peace was done through the clan system. In the US-made corporate version, the clan system was replaced with the party system, an artificial clan. We Ongwe’hon:we get our clans from our mothers and cannot interbreed amongst clans. The artificial party system can change at will.

The British Empire is the only empire left on earth. It exists in Canada, US, New Zealand, Australia and Israel. It is time for this empire to fall. The monarchical democracy that Canada purports to follow is like the US system with a hierarchical presidency. It’s all theatre.
The true decision making power of the Corporation of Canada lies with its board of directors at the Privy Council. They oversee the day-to-day operation of the corporate officers: prime minister, leader of the opposition, finance minister, etc.

Great Peace: Everyone has a voice & everyone is equal.
Dekanawida described the warmonger as “the man who eats humans”. They love disorder and hate peace. Their minds are twisted so as to strike fear into all. In the pretend democracy people’s wishes are irrelevant. Corporate boardrooms make decisions for governments and its entities. Voting is a token gesture controlled by the oligarchs.
Dekanawida also said all peoples shall love one another and live together in peace, through righteousness, health and power. Righteousness is justice practiced between people and nations. Health is soundness of mind and body so that peace comes when minds are sane and bodies are cared for. Power means authority of law and custom backed by such force as is necessary according to the will of the people.
The Great Peace makes oligarchs look into the mirror to see their evil. Dekanawida said they have to make right all the suffering they caused. He advised to never go against the forces of nature, which is the basis of the Great Peace/Kaia’nereh:kowa.
Steve Winwood captures the feelings of our current dilemma: “Come down off your throne and leave your body alone. Somebody must change. You are the reason I’ve been waiting all these years. Somebody holds the key. I’m near the end, and just ain’t got the time. And I’m wasted and I can’t find my way home”. [Can’t find my way back home].
1754 Albany Plan.
MNN Mohawk Nation News kahentinetha2@mohawknationnews.com For more news, books, workshops, to donate and sign up for MNN newsletters, go towww.mohawknationnews.com  More stories at MNN Archives.  Address:  Box 991, Kahnawake [Quebec, Canada] J0L 1B0 thahoketoteh@mohawknationnews.comoriginal Mohawk music visit thahoketoteh.ws
Video: Global corportocracy & neo-colonialism.
Read. Decolonize Ono’ware:geh.
Benjamin Fulford on state of world.

El Paso, TX /Southern New Mexico- Border Network for Human Rights will hold a March and Rally on Wednesday, March 25th, 2015 starting at 11:00 a.m. this actions are part of the Statewide mobilizations convened by Reform Immigration for Texas Alliance (RITA) to repudiate the anti-immigrant agenda being discussed at the Texas Legislature. Proposals like HB11 in the House and SB3 in the Senate not only aim to undermine the trust communities currently have towards law enforcement agencies, but also attempt to hurt Texas economy and values leaving thousands of students without access to in-state tuition.

While our state is moving forward with policies that would deploy hundreds DPS personnel for the vague cause of “securing the border”, dozens of cities will join us around the state in a Statewide Day of Action to make sure that immigrant and border voices are heard loudly and clearly in Austin, in that sense BNHR reiterates its opposition to any proposal that endeavors to injure the great state of Texas.

***
The Border Network for Human Rights, founded in 1998, is one of the leading human rights advocacy and immigration reform organizations located at the U.S./Mexico Border. BNHR has over 7,000 members in West Texas and Southern New Mexico. 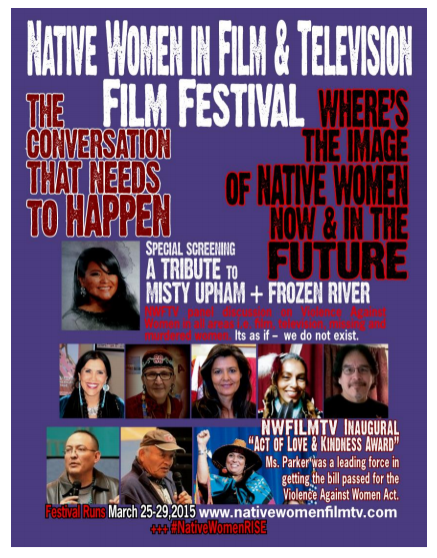 Newe Sogobia "The People Together with Mother Earth"

The Native American Youth Awareness Forum on Nuclear Issues will bring together Native American youth together with elders active in nuclear issues surrounding the Nevada National Security Site (formerly the Nevada Test Site) to communicate the history and values of tribal involvement around the Nevada National Security Site (NNSS).
Who should attend: Native American youth in high school, college or considering college with an interest in helping the people carry on the work of protecting the land and people of the Great Basin from nuclear threats and hazards?
What to expect: The event is intended to immerse the participants in the history of U.S.. nuclear development and its impacts upon Native Americans living in communities surrounding the NNSS. We will share our experiences and responses to the adverse health consequences known to be plausible from exposure to radiation in fallout from nuclear weapons testing. We will provide a Native American perspective to development of the proposed high level nuclear waste repository at Yucca Mountain. Participants will have opportunities to engage one-on-one with presenters to foster collaborative relationship, research and support.

This event is free and open to the public. 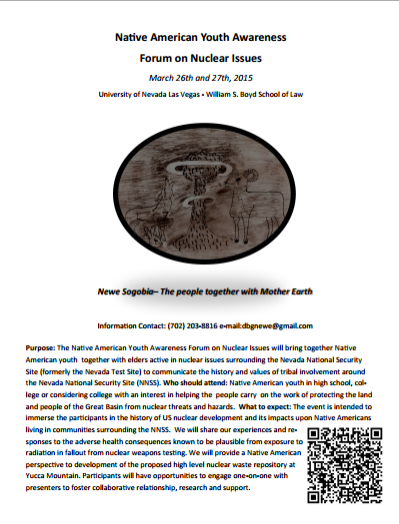 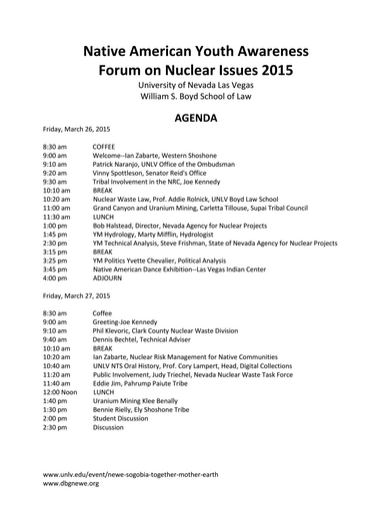 Admission Information
This event is free and open to the public.
Contact Information
Office of Diversity Initiatives
Patrick Naranjo
702-895-1829
Patrick.naranjo@unlv.edu