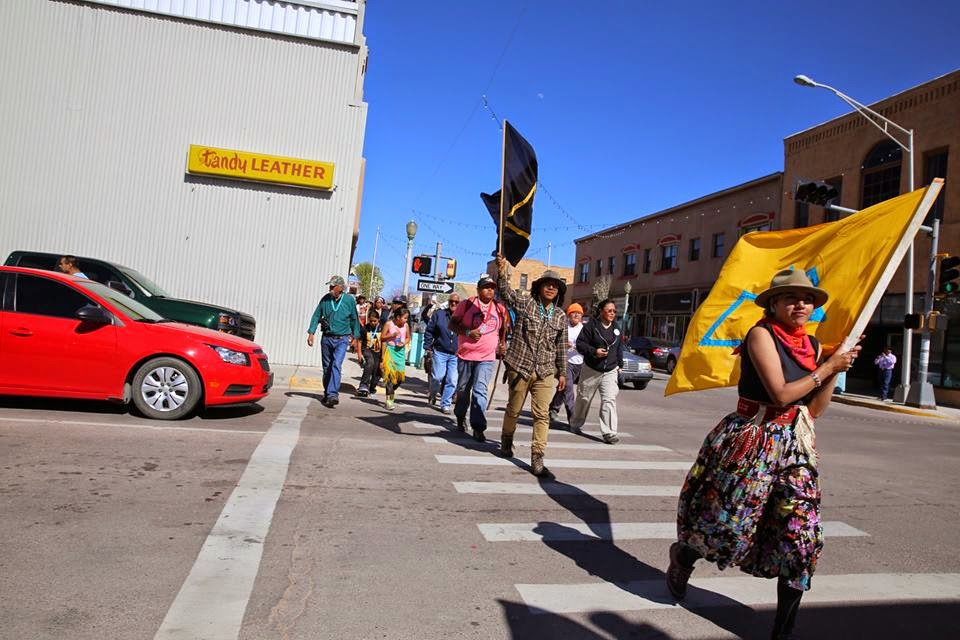 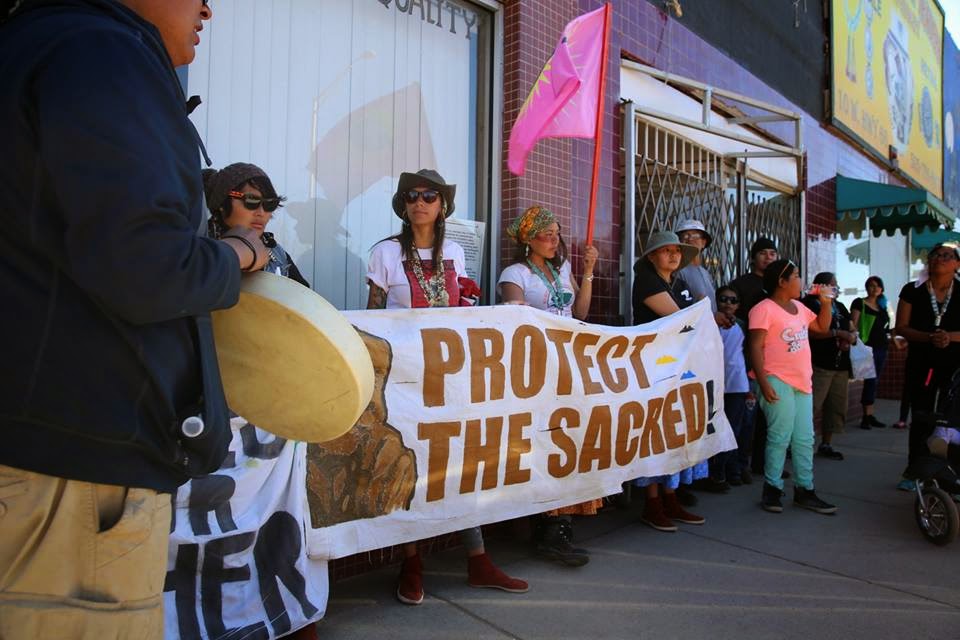 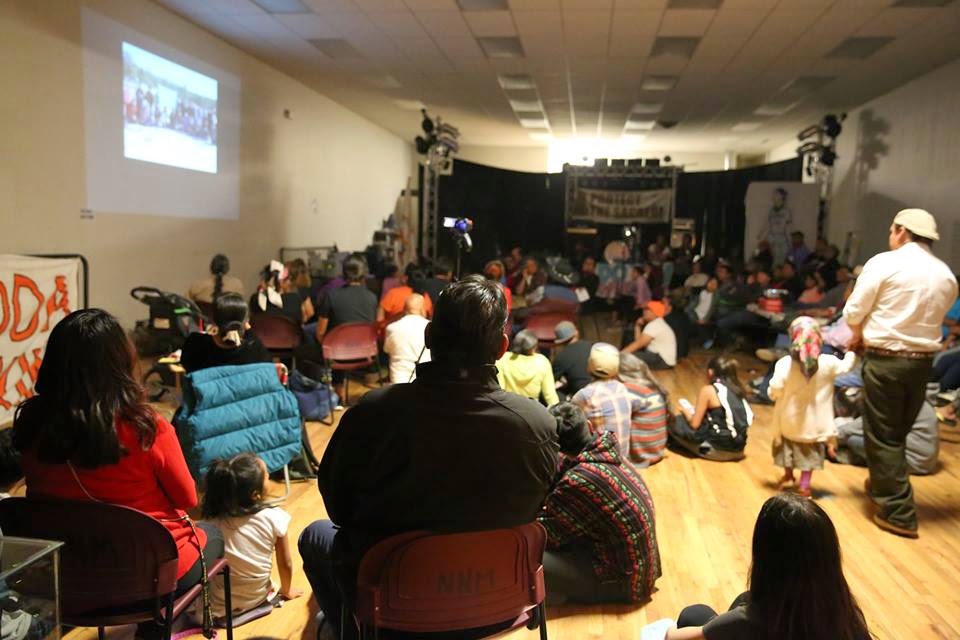 GALLUP, NM -- The community of Gallup flocked to the Downtown Conference Center last Saturday to attend a presentation by the walkers of Nihigaal Bee Iina. The evening was filled with food, prayer, informative slide shows and creative performances affirming the beauty and value of Diné land and culture.
The movement--translated as “Our Journey for Existence”--was ignited by young Diné women earlier this year to expose the disproportionate amount of resource extraction and contamination suffered by Diné people for the benefit of others. They have walked over 300 miles since January, feeding and educating community members at schools, chapter houses and homes all along the way.
Walkers left Church Rock Chapter House in the morning and arrived in Gallup around 4PM on Saturday holding flags of the four sacred mountains and other banners expressing their message. Nearly 100 people attended the feast and presentation while walkers shared their experiences. Although the information shared by the walkers was heavy, the evening was filled with fun and laughter.
Libby Williams, an elder woman supporting the walkers, stated: “Walking will teach you. Every step is a lesson. When you are in a vehicle you don’t notice everything. You don’t notice all the trash along the road. You don’t notice the beauty of Mother Earth. You don’t notice what humans are doing to it. It’s totally inspiring to see them walking, that they believe in something. Baahozhó t’áá’ni’joogááłgoh.”
Walkers left Gallup on Sunday and headed towards Window Rock where they will meet with more community members. Walkers extended an open invitation to all respectful peoples to join them on their journey. For more information, email nihigaalbeeiina@gmail.com or visit the Nihigaal Bee Iina Facebook page.
###
For more information please contact Nihigaal Bee Iina Organizers by email at nihigaalbeeiina@gmail.com or by phone at 949-536-0988. Photo Courtesy of Orlando Begay 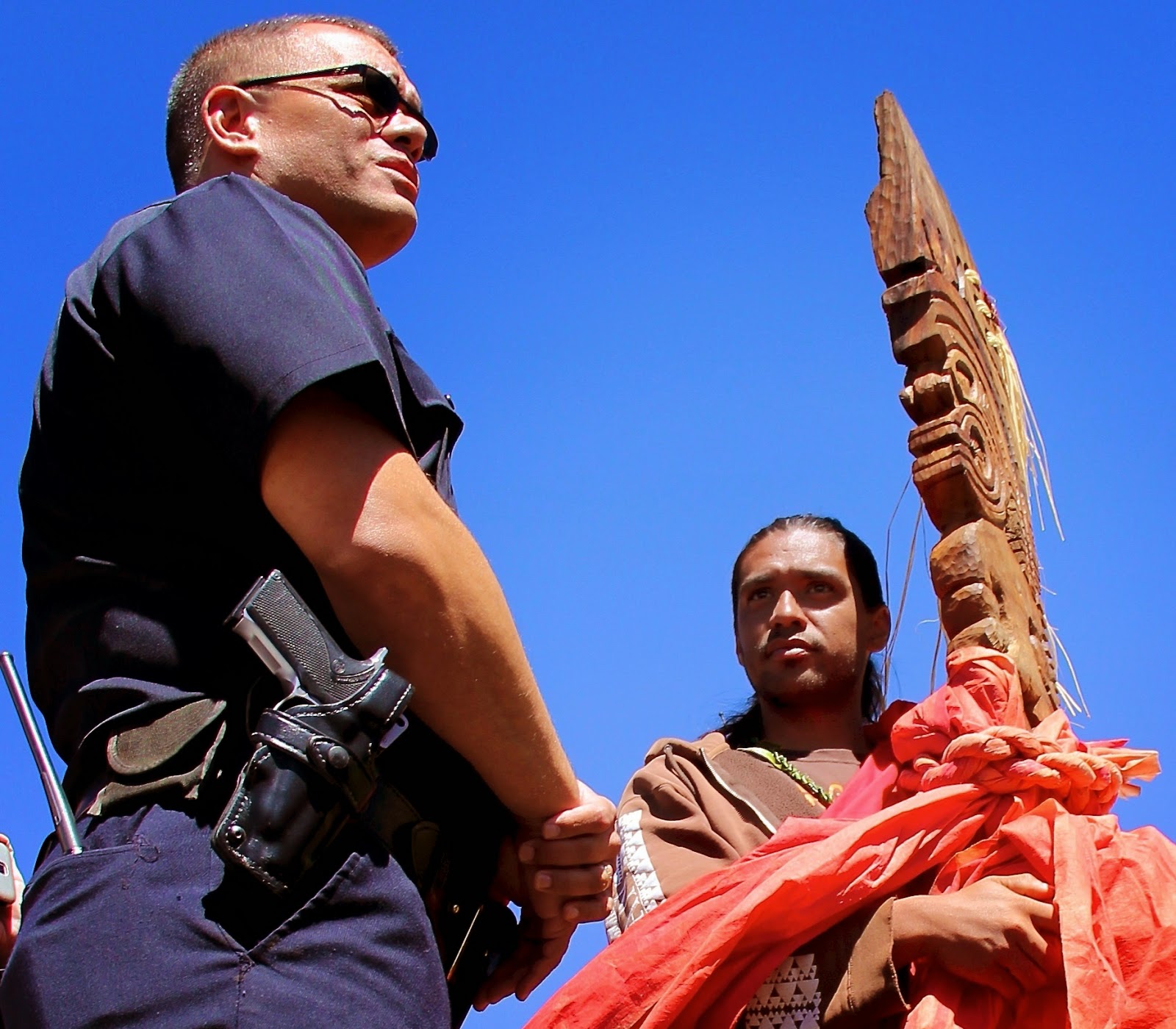 MAUNA KEA, Hawai’i Island, March 30, 2015 — Today marked the sixth day and sixth night since a group of Kanaka Maoli warriors representing several islands in the Hawaiian Islands and a multi-ethnic group of supporters formed a blockade at 9,000 feet above sea level at Mauna Kea also known as Mauna A Wakea on Hawaiʻi Island.

They are protesting the construction of a 30-meter telescope (TMT), which they say is a desecration of the most sacred place in the Hawaiian Islands. The peaceful protest has been ongoing for several years but in the past several months has gathered more momentum and support from Hawaiians and other non-Hawaiians around the world.

Today also marked the first day that TMT workers showed up since the protest began six days and six nights ago.

“I have confirmed that the multi-ethnic group of protestors succeeded in stopping workers from passing through despite the large police presence all day,” says Hawai’i island native Kamahana Kealoha, a cultural practitioner and an organizer of the protest. “The police arrived at around 8 a.m. today intent on infiltrating the line and breaking the protesters apart.”

The protesters are being led by Lanakila Mangauil, a prominent cultural practitioner from Hawai’i Island. Mangauil, who had an enormous amount of help from hundreds of people who facilitated the success of the first protest, was able to stop the TMT ground breaking on October 7, 2014.

Today’s protesters have been inspired by the success of the October events and are continuing to hold steadfast to their plan not to allow any TMT workers into the area. They have vowed to block them all. The protesters are holding checkpoints, such as a roadblock on the Mauna Kea access road to do this and, in particular, at the 9,000-foot level at the Visitors Center.

“There have been no arrests, no violence and no one hurt,” notes Kealoha. “We are always respectful of this sacred area despite challenges from non-protesters at times, including the police and TMT workers.”

The organizers have also harnessed the power of social media to attract an international audience to their cause. “We keep hearing, almost hourly, about simultaneous protests being organized in other parts of the Hawaiian Islands and, indeed, on the continental U.S. and other countries,” says Kealoha. “This is an international show of support for our Mauna—our Mother—which resonates with all people concerned with the future of our planet.”

Some of the other activities that are being planned in coming days include:

The University of Hawai’i/Manoa and “Mana” hui, working with the U.H./Hilo student body and others, will host an event that protest organizers Kealoha and Kiulani Mahuka and other friends of the Mauna will attend. Kealoha and Mahuka will offer remarks. The event begins Tuesday, March 31, and will continue until Wednesday, April 1.
Wednesday, April 1 on O’ahu: Organizers Kealoha and Mahuka will stage a protest at the “Capitol” beginning at 6:30 a.m.
Saturday, April 4 on O’ahu: Kahu Brad Lum and Kailana Kahawaluokalani Kepelino Moa-Eli will protest again at the “Capitol.”
Alapaki Heanu and Noelani Maka of Maui will organize an event at U.H./Maui. Date and time TBD.
Protests on other islands are currently being planned and details will be available soon.

“This telescope is an atrocity the size of Aloha Stadium,” says Kealoha. “It’s 19 stories tall, which is like building a sky-scraper on top of the mountain, a place that is being violated in many ways culturally, environmentally and spiritually.”

“However, this struggle is about so much more,” notes Kealoha. “We are fighting against our erasure and ethnocide as well as the threat for all to our main water aquifer and endangered species conservation district.”

“We humbly ask the world and all those who hold the Mauna sacred to aid us in this struggle, which is for all of us and our future generations,” says Kealoha. “Please get to the Mauna and support the brave warriors who are protesting indefinitely at the 9000 foot level.”

The group is requesting donations for flights to and from Hawaiʻi between the other Hawaiian islands as well as much-needed accommodations, including food, ground transportation and other essentials. Those interested in donating may click on the Sacred Mauna Kea Fund link: http://www.gofundme.com/sacredmaunakea or contact Kealoha at sacredmaunakea@gmail.com.

“We need your kokua (help) to continue our work on behalf of all concerned people of these islands,” says Kealoha. “Please support from wherever you are—here in the Islands or around the world.”

For more information and updates, visit http://sacredmaunakea.wordpress.com/. Photos can be downloaded at
https://www.dropbox.com/sh/ppoa8bc7xae13jt/AADwxlPw0qsNiChE27oE-9cTa?dl=0

Please post & distribute. Nia:wen.
MNN. 30 Mar. 2015. Prime Minister Harper wants to replace the genocidal Indian Act with tougher corporate rules to kill the natural people of this land. These colonial genocide laws do not legally apply to us, only to your corporate members who vote in your system.
Canada, US, New Zealand, Australia and Israel want to legalize genocide so the Vatican cannot be punished for carrying out the biggest genocide in all mankind. These serpents are in the Vatican, City of London and Washington DC. making war on everyone. The Minister of Immigration’s vile rhetoric about attacking Russia is how the murder of our people was discussed and planned in Parliament. Monday night Harper’s government voted to extend the Iraq mission indefinitely and to bomb Syria. UK and EU voted not to. Canada and US are bombing Syria.

Canada is a corporation, a colony of the British Empire, not a legal country. Ia-te-ho-ne-se-ra-ien means they have no footprints on Great Turtle Island. Their ship can only make a small whirlpool. They cannot make a final assault on us with these new rules.
We Ongwe’hon:weh will write the rules after the collapse of Canada. With no Indian Act the Great Peace will apply to every part of Great Turtle Island. We will negotiate with all the colonial settlers so they can become of one mind with us, as we did in 1701. We are the land. They must follow our way or leave.
Canada must implement the 1960 UN Declaration on the Granting of Independence to Colonial People.Decolonization Act. Once the Indian Act is gone, everything reverts to us. Over $900 trillion of our stolen funds will be returned from the bankers. All taxes and rent will be turned over to us.

Lasagna.
When we told one of our men, the same age as Harper, about his plans for the final solution of the INDIAN problem, he said, “I challenge warrior chief Harper to a bare knuckle fist fight to the death in Parliament so everyone can witness it. Winner takes all!”
The Iroquois Confederacy think those who would try to destroy us cannot do so without bringing about the downfall of the whole earth. The dream is world union under the shade of universal law. Unless Canada sits down quietly under the Tree of Peace with us, they will destroy themselves.
Stephen Harper, Motorhead sings this directly to you: “If you like to gamble, I tell you I’m your man. You win some, lose some, all the same to me. The pleasure is to play. Makes no difference what your say. I don’t share your greed. The only card I need is the Ace of Spades”.
No. 1: 100 million Ongwe’hon:weh. 15 worst genocides in history.
http://aptn.ca/news/2012/10/18/harper-government-unveils-path-to-repeal-indian-act/
http://nationalunitygovernment.org/content/australian-government-chooses-jail-and-punish-first-nations-people-rather-protect
Minister of Immigration war-mongering:
Canada & US going it alone.
Putin preparing for WW III.
MNN Mohawk Nation News kahentinetha2@mohawknationnews.com For more news, books, workshops, to donate and sign up for MNN newsletters, go towww.mohawknationnews.com  More stories at MNN Archives.  Address:  Box 991, Kahnawake [Quebec, Canada] J0L 1B0 thahoketoteh@mohawknationnews.comoriginal Mohawk music visit thahoketoteh.ws

Tribes from across U.S. testify in support of Oak Flat

Photo by Alejandro Molino . C opper mines have done extensive damage to the Earth in Arizona. The Morenci mine operating near Oak Flat; Silv...